Latinx vs. Hispanic: What’s the Difference? 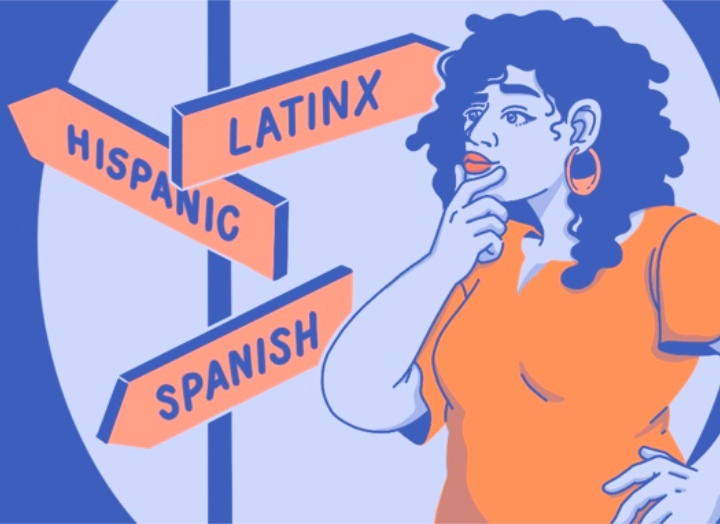 When it comes to identity, nuance is critical. ﻿This is why there are still disputes about the term “BIPOC,” the relationship between race and ethnicity and what’s considered a problematic question (because “What are you?” and “Where are you *really* from?” is a bad way of misidentifying someone). But the distinction between Latinx vs. Hispanic and which term is more appropriate as an identifier (whether you're talking about yourself, a friend or a celebrity in the public eye) remains a popular debate. So we’re doing a deep dive of each term and its history to find out what makes them so different.

What does it mean to be called Hispanic?

The term Hispanic refers to a person from Spain and/or other Spanish-speaking countries, including Colombia, Cuba, Dominican Republic, Puerto Rico and Venezuela, to name a few. In 1977, the United States government began using the term for population purposes (aka the census). Basically, they wanted a way to fit everyone under one umbrella to see the social and economic progress as a whole.

What does it mean to be called Latino/a?

The terms Latino and Latina refer to a person born or having ancestors from Latin America, including Central America, South America and the Caribbean. It rose in popularity in the early ‘90s because it excludes any ties with Spain or government interference.

But wait, what about Latinx?

Latinx (pronounced luh-TEE-neks) holds the same meaning as Latino/a. However, in the last decade, it’s become an inclusive term to use instead. It was coined in the early ‘00s as a gender-neutral and non-binary option for everyone—regardless of gender, sex and/or sexuality.

...And Afro-Latinx, Latine and Latin@?

Afro-Latinx (or Black Latino/x) is a person from or has ancestors from a Latin American country with African ancestry. This community combines their race and ethnicity together as a way of saying ‘Hey, it’s possible to be both not just one.’ But more importantly, it lets them embrace their Blackness especially when colorism and racism are so prominent within the Latinx community.

Latine and Latin@ (which combines both the “a” and “o” in Latino/a) are more terms to help keep everyone included in the conversation.﻿ There’s also Chicano/a which are used by some Mexican Americans. The term derived from the Chicano Movement of the ‘60s to promote culture, community and pride.

So, what is the difference between Latinx vs. Hispanic?

The key difference between Latinx vs. Hispanic comes down to language vs. location. For example, Guatemalans can be both Latinx and Hispanic because they speak Spanish and live in a Latin American country. However, Brazilians are Latinx but not Hispanic because their primary language is Portuguese. But we also need to consider who these terms ﻿don't﻿ include. When it comes to ﻿the term Hispanic, Afro-Latinx, Asian Latinx and Indigenous people are left out. Another striking difference is the historical significance of Latinx and Hispanic.

OK, so why do people disregard the term Hispanic?

When Hispanic was introduced, many believed it stood for the long history of colonization and conquest of the Spaniards. (The word does mean “Spain” in Latin after all.) From a political standpoint, the term was also used to drive Mexican Americans away from identifying as Chicano/a and instead feed into the cultural ideal that we are all one. This assimilation ideal brings out the microaggressions we know today and strips away what makes every culture unique. And as mentioned, it excludes specific communities.

When it comes to new terms being coined, some people aren’t susceptible to change. Some believe the term ruins the Spanish language (because it's difficult to pronounce and not grammatically correct) while others believe the term is an unnecessary invention by a new “politically correct” generation. There is still a growing debate about whether the term Latino/a is losing its meaning after so many people fought to bring this word to the mainstream. It’s also still a fairly new word with 76 percent of people not even aware that it exists (and only 3 percent of the people in the study identifying as Latinx), according to Pew Research Center.

Got it. So should I use Latinx or Hispanic?

It’s totally up to you. With both terms still up for debate by so many people, the question is, which one is more socially acceptable? By 2010, the U.S. Census started lumping both Latinx and Hispanic together. But it’s important to note that these terms are not interchangeable. They have different meanings with both pros and cons associated with them.

Oh, and BTW, these terms are very much an American thing. Countries outside of the U.S. mostly identify with their country of origin or nationality. Even some Americans prefer saying they're Puerto Rican or Ecuadorian or Argentian over Latinx or Hispanic. So no, you don’t have to stick to these two terms to identify yourself.

These identifiers can also bring a sense of identity crisis. If I don’t speak Spanish, am I not considered Hispanic? If I’m a fourth-generation in my family and wasn’t born in a Latin American country, am I not considered Latinx? There are many factors that come into play that don’t make these terms a one-size-fits-all.

At the end of the day, it’s best to ask someone how they identify themselves. If you prefer Latinx, Hispanic or your place of origin/nationality, be open to letting others know. Don’t assume someone’s label based on their background. Nothing good comes from assuming or judging someone based on your unconscious bias.

What Does BIPOC Stand For? Here’s Why You Should Consider Using the Term to Be More Inclusive