Being a Peloton Instructor Groupie Is a Thing Now (I Should Know, I Am One) 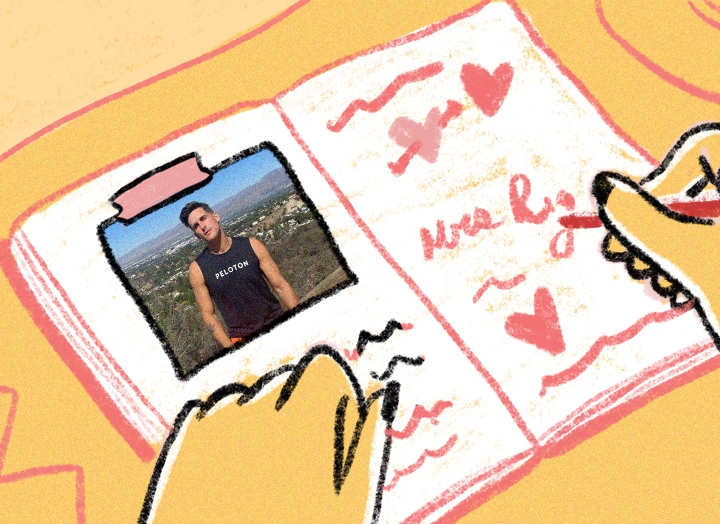 My first experience on the original Peloton bike went all wrong. For one thing, I could not for the life of me figure out how to unclip the shoes (it’s actually crazy easy, I learned after watching this vid), but I struggled to find my footing metaphorically, too. Don’t @ me, but the very first ride I did on the Peloton was not a class, but a bike tour through Portugal. (For the record, it was lovely and challenging and meditative, but as I’d come to experience soon after, not the secret sauce that keeps Peloton users coming back—more on that later.)

It wasn’t until my spouse, of all people, who also was getting into a regular routine spinning post-preschool drop-off or on his lunch break, suggested I pick a ride based on the music: “There’s this guy who loves Britney Spears. You should try that.” I cued up the search bar and typed in Britney. Boom, some guy named Cody Rigsby appeared. (Reader, forgive the fact that I’d apparently been living under a rock up until this point.)

This particular Cody ride was marked as intermediate, and though I was firm in my beginner status, I thought if anything merited a decision to push myself, it was a playlist chock-full of Britney tunes. I clicked my shoes into place and adjusted my bike shorts (I got a pair with extra padding—gamechanger). As “(You Drive Me) Crazy” piped through my headphones, I cranked the resistance—but Britney wasn’t the reason my workout had extra oomph.

No, it was Cody—a New Yorker, a Britney mega-fan and a guy famous for his fanbase, known as the #BooCrew. (It’s 100,000 members and counting—the name nods to the pet name that punctuates his iconic and encouraging mantra: “It’s not that deep, boo!”)

Maybe it was Cody’s deep appreciation of the early aughts, or maybe it was his demand that I better get “my lip sync on” while working out. Within seconds, I too was rocking out on the bike, pushing myself in ways I never dreamed possible when I was virtually pedaling through the Algarve.

That’s when I decided to dial Sabrina, another Cody superfan my editor alerted me to. As a Peloton user since July 2019, her relationship with Rigsby runs much deeper than mine. For one thing, she’s got the merch (her husband bought her an “XOXO, Cody” T-shirt that she wears loudly and proudly). She also follows him on Instagram and credits Rigsby as the reason she’s become a loyal first-time watcher (and voter!) of Dancing with the Stars. (Cody made his debut on the show this season.) Still, on a daily level, Sabrina says Cody is her #1 source of motivation whenever working out is the last thing she’d like to do.

“He’s fun; he’s light-hearted,” Sabrina says. “Even though he’s incredibly talented and fit, Cody is also very willing to share his struggles in his classes and I find that very encouraging in comparison with the instructors who make everything look so easy.”

Most importantly, though, Cody has a point of view. “I’m always attracted to people who have strong opinions, even if it’s about silly things,” Sabrina says. For example, when she joined him for a live ride the day of our chat, Cody—while pedaling hard uphill and down—was sounding off about foods he doesn’t like. As it turns out, he and Sabrina both share a hatred of water chestnuts. “It’s some funny thing he talked about on the ride that made me laugh, but he wears his personality on his sleeve whether he’s discussing something silly or really important,” she says. (Peloton is known for being progressive, she adds.) “I find it very distracting from the exercise I’m doing, but also a way of feeling quite connected to this person who is otherwise a total stranger.”

Cody is a star, there’s no question about it, but he’s not the only Peloton instructor procuring groupies. Patricia, a Peloton devotee since mid-2020, can attest she has a core group of instructors, but Jess King was the one to officially hook her in. “As long as Jess was teaching, I wanted to experiment with new types of exercise, work harder and put more time in,” Patricia says. “She is so genuine. She isn’t afraid to sweat and be vulnerable in front of thousands of people. She strikes a good balance between fun, motivation, good music and being totally entertaining while delivering an amazing workout.”

Kristan, who counts herself a Peloton newbie (she’s had the bike for six months), self-identifies as a die-hard Emma Lovewell fan. “I think it’s important for me to say that I didn’t believe the hype,” she says. “I thought Peloton was an overpriced bike with another set of good-looking instructors trying to yell superficial affirmations at you to get you through a workout that would yield no results. I tried it because I needed something to help me stay accountable.”

When she discovered Emma, everything changed. “[Because of her], I started to get on the bike every day,” Kristan says. “Emma feels genuine and real. She says things that aren’t cheesy but help me push beyond my comfort zones. There’s also something about what she’s saying that makes me think she needs her own words of motivation as much as I do. Maybe it’s a feeling of solidarity? It’s like we’re in this together.” (Both Patricia and Kristan keep up with their favored instructors on Instagram.)

Jen Cotter, Peloton’s Chief Content Officer, reveals that Peloton looks for a few specific things when hiring instructors to join their team. “We want individuals who are experts, accredited athletes and accomplished trainers with individualized expertise,” she says. But what about the je ne sais quoi factor that has the potential to turn them into superstars? Cotter lists, among other attributes, that Peloton instructors “are personalities—authentic, trusted, confident authorities who are highly skilled on-camera talent.”

But back to Cody and his influence on his followers, ahem, myself included. Was it the pandemic that helped anchor him so firmly in our hearts? Sabrina has a theory. “Even without the pandemic, [these classes] would have provided value, but this kind of skyrocketing stardom is of course tied to it,” she says. “The challenges around mental health have been exacerbated during this time. The fact that these instructors focus not just on exercise, but on well-being broadly? My time with Cody doubles as a meditation almost.”

It makes sense: Given the trauma of the past year and a half, we’re all trying to carve out space for self-improvement, connection and fun. But we also need a place where we can let loose and take care of ourselves for a minute. Cody embodies that: “It’s not that deep, boo!” (We will note that while the pandemic has taken these instructors’ popularity to new heights, many of them—Cody, Jess and Emma included—had ultra-devoted fanbases among folks who rode in-person at Peloton’s NYC studio pre-COVID.)

The fact that this naturally pivots to groupie status? Well, that’s just a fun, but totally enriching bonus. “I truly am someone who has fallen in love with a Peloton instructor during the pandemic,” Kristan laughs. “Did I ever imagine I’d become enough of a fangirl to add the #teamemmalovewell hashtag to my profile? Not ever, but here we are. I think it’s just the feeling that you’re hanging out with someone who isn’t judging you, but encouraging you to be stronger than you were yesterday, and that’s what I love. Also, the fact that no one can see you when you’re sweating and grunting and working it all out at home, however you’re ‘seen’? That’s incredibly validating and uplifting, too.”

The 40 Best Peloton Classes Every Subscriber Needs to Take, According to Die-Hard Fans