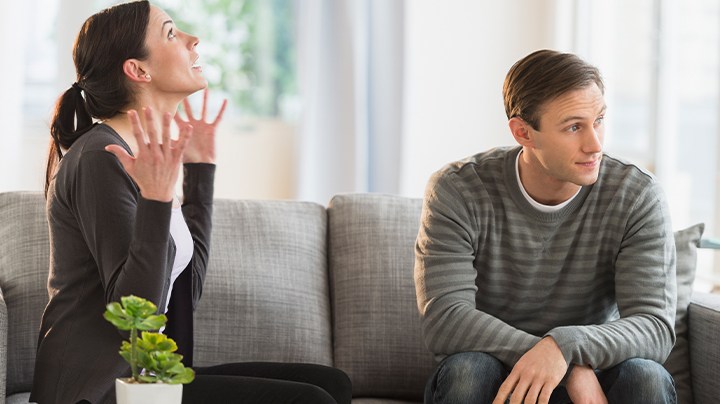 Most of the time, your relationship with your partner is #goals. You’re both kind and considerate, you laugh during all the same scenes of The Office (even though you’ve seen it a hundred times together) and together you feel safe. But even the most solid duos slip into a spat every now and then. It’s usually over something that’s quickly resolved, but this time it’s different. Your partner has resorted to the silent treatment: They’ve stopped responding to the points you’re making, they’re not even looking at you and it feels like you’re talking to the side of their head.

This super frustrating, juvenile tactic might seem familiar to you from your grade-school days. How the heck do you respond to something so childish? We consulted a team of professionals—relationship therapist Jean Fitzpatrick and individual and couples therapist Irina Firstein—to help us figure out how to respond to the silent treatment without regressing back to infancy ourselves.

8 Ways to Get Over Your Relationship Anxiety

1. Understand What the Silent Treatment Is

To one partner, the silent treatment is their way of dealing with an argument, but to the other, it’s a sign of shutting down. When your significant other refuses to speak to you or even acknowledge you, it’s not only infuriating but might also affect your bond. As Fitzpatrick says, resorting to the silent treatment can be just as harmful as yelling right in your partner’s face, and it’s certainly just as hurtful.

“Another name for the silent treatment is stonewalling, a term devised by researcher John Gottman, who calls it one of the most damaging behaviors partners can exhibit in a relationship,” Fitzpatrick tells us. “When you stonewall, you refuse to talk to your partner for hours or even days after a conflict,” which—as we’re realizing we might also be guilty of from time to time—“manifests in radio silence on texts and emails too.”

2. Then Why on Earth Is My Partner Doing It?

We’re going to go ahead and assume your partner isn’t actively trying to hurt you—better yet, your S.O. is likely trying to avoid a screaming match by clamming up in the first place. It might feel spiteful to you, but to them, it’s their way of responding to distress and they’re probably not even thinking about or considering the detrimental effect that this action is having on you.

“This is a defensive coping strategy to keep the other person away, and at the same time, hurt them back,” says Firstein. This sounds kind of harsh (and it is), but if your partner is acting like you’re not there in the moment of the fight, they’re not necessarily trying to turn that knife.

“It’s a destructive strategy to use in an adult relationship,” Firstein says, “but it’s also typically a learned response to dangerous or hurtful exchanges your partner experienced in childhood.” This isn’t an excuse, but it’s a possible insight into the why of it all, which could help lessen the sting.

It’s important to remember that your goal here is to help steer your partner out of their mute retreat and back into an open and constructive conversation with you. To get there, you might have to allow more time to pass than you think feels normal, but it will be worth it when they come back around to their usual bubbly self.

“If it’s happening after an argument, it’s natural to feel that your silent partner is slamming the door on you, but try to keep in mind that he or she is probably struggling to process painful or complicated feelings,” Fitzpatrick says. “Avoid attacking them or insisting they talk to you before they’re ready to.”

Try again after you’ve both cooled down a bit. But remember that the quickest way to get them to regress again is to play the blame game. “If your partner is still being distant after some time has passed,” Fitzpatrick continues, “let them know—calmly—that you are interested in hearing them out and would like them to share with you what’s going on in their head. It’s much more effective than trying to guilt or blame them into talking.”

4. Give the Silence a Deadline

Remember that you are a person in this relationship too, and it’s reasonable to need some clarity on when you can expect your partner to be open to talking again. Fitzpatrick suggests coming up with a timetable of sorts for arguments that reach this level in order for both of you to have a bit of what you need—them, time; you, structure.

“In an intimate relationship, my advice is to try to work together on it,” she says. “Talk about creating a time frame for the silent treatment to give the partner who’s choosing not to speak the space he or she needs to process their own emotions without hurting the other person. For example, instead of just going completely silent, the partner can say, ‘I need half an hour to myself. Let’s check in then.’ That way they don’t leave the other person feeling abandoned or shut out.”

But setting this expectation for communication isn’t always a foolproof plan. It’s possible that 5 p.m. will come and go and your partner still won’t be ready to talk. This is also OK, as neither of you should be forced into a dialogue that you might not be ready for. If another half hour is what it’s going to take, try to maintain a level of silent communication by acknowledging that the other person exists in your same space instead of responding with anger.

“When you’re both ready, you’ll talk,” Fitzpatrick says. “But in the meantime, it’s important to keep a little bit of your connection consistent, even if that means just making occasional eye contact.”

This might feel a little strange at first, but looking each other in the eye is an intimate action that—in itself—could defuse the tension. “Deep down, no one wants to not talk to someone who is important to them,” Firstein says. “It is important to acknowledge and respect this particular defense mechanism [the silent treatment] but also try to convey that it is safe to talk to you when they’re ready and that doing so won’t lead to something terrible.”

A strong relationship—like yours—is built to withstand tiffs, disagreements and, yes, even the silent treatment. Work through why it’s happening, set healthy boundaries around what you both need to stay sane, and argue better.