When you think San Diego, odds are retro amusement parks and the nationally renowned zoo come to mind. But have you heard of the tranquil-yet-buzzy Oceanside? Once a modest, blue-collar military town, this beach locale has undergone a serious cultural renaissance in recent years. Local businesses, innovative dining experiences and outdoor fun bring both Cali residents and out-of-towners to its welcoming shores. Not only does Oceanside deliver a San Diego experience with fewer crowds than the downtown area and touristy hotspots, but now is also a stellar time to visit, since the weather is still deliciously warm on the West Coast. Read on for details on where to stay, what to eat and what to do in Oceanside, California.

The 12 Best Things to Do in Memphis, from Music Studio Tours to Barbecue Joints 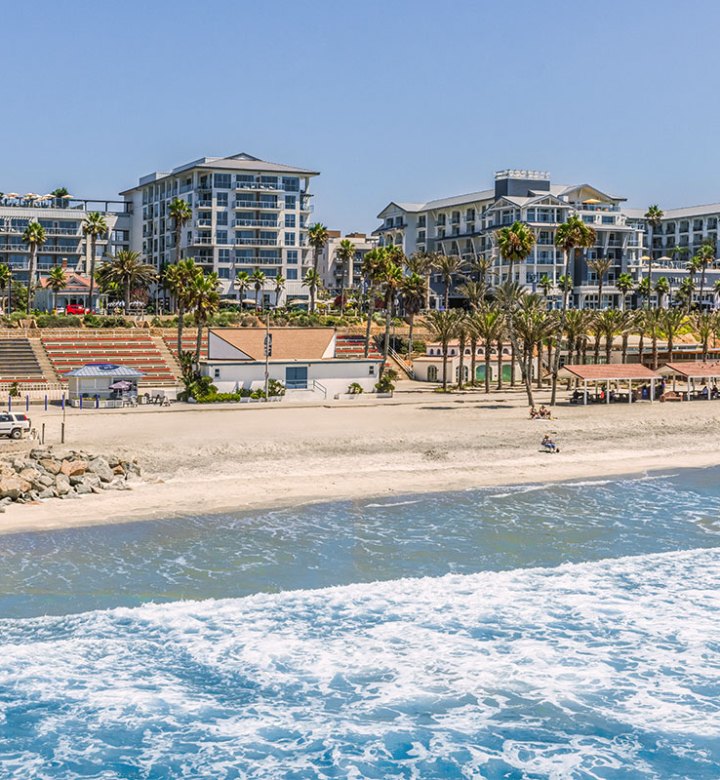 What Is Oceanside, California?

Referred to as O’Side by locals, Oceanside is a laidback beach town that exudes SoCal charm, minus the arguably uppity or pretentious feel of nearby locales like Del Mar, Venice, Newport and La Jolla. It’s a 90-minute drive from Los Angeles and 45 minutes from downtown San Diego, so Oceanside is a no-brainer for those embarking on a coastal road trip, as well as for first timers who want to make the most of their visit to SoCal.

Once home to missions and ranchos, the area that we now know as Oceanside has had many evolutions. Most notably, it became known as a military town once Camp Pendleton, the country’s largest Marine Corps base, was constructed. The base is still there, as are the several fishermen who keep Oceanside’s modest roots alive, but it’s now also a top destination for foodies and surfers alike. (We have low property taxes, biotech and medtech companies and agriculture to thank for the town’s recent growth.) In short, it’s a beach town with all the perks of a modern city without the cons of overpriced real estate and excessive crowds.

If you live somewhere that has cold winters, we recommend visiting during that time of year to escape frigid temps, but there really is no wrong time to visit Oceanside—the weather is gorgeous year-round, and there’s always something to do. (Although if you’re into surfing, go during the fall for the Super Girl Surf Pro, the world’s largest surf event and music festival.) 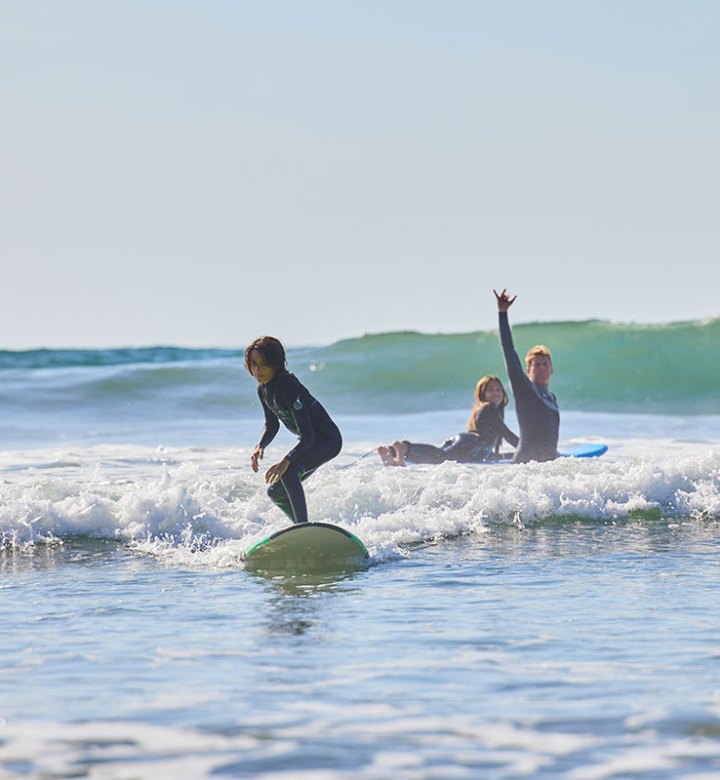 Things to Do in Oceanside, California

You’ll want to reserve plenty of time and energy to explore the town on foot (or via bike or skateboard), since it’s rich with public murals and historic sites. Get tickets for an O’Side Murals Walking Tour to get acquainted with the town’s creative spirit and local artists. Then, head to the Mission San Luis Rey to learn about the Franciscan friars and Native Americans that once inhabited it more than 200 years ago.

If surfing is your thing, make the trip to the California Surf Museum, where you can learn about the history of surfboards and wave-riding. (Of course, you can also ride the waves yourself with the locals if you dare…or just watch from your hotel room.) You can also spot whales and dolphins with Oceanside Adventures, kayak the day away on Oceanside Harbor or even get a bird’s-eye view of the water on a Waverider Helicopter Tour. Above all, be sure to make the 1,942-foot trek along the iconic 135-year-old Oceanside Pier, where you’ll find an old-school bait shop, local fishermen at work and countless (and surprisingly friendly) pelicans. 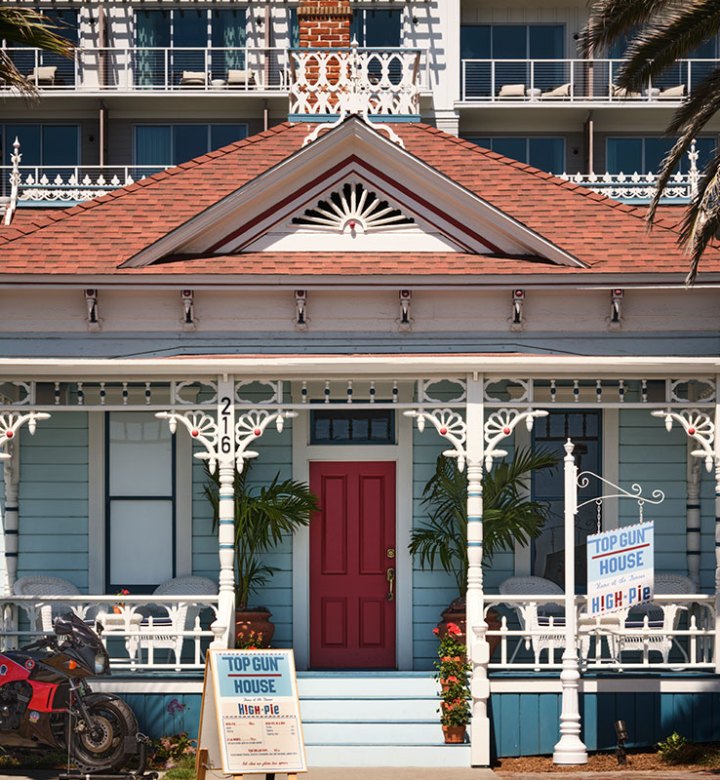 If you prefer land to sea, explore your surroundings on a bike or scooter, and be sure to make a stop at the Top Gun House, a 140-year-old landmark made famous by the movie Top Gun. The house was recently restored and updated to include HIGH-Pie, an old-school dessert lounge that’s beloved for its fruit-filled hand pies and creative dipping sauces. And to get all your steps in, try a hike at Guajome Regional Park, Buena Vista Lagoon Ecological Reserve Trail or Oak Riparian Park. 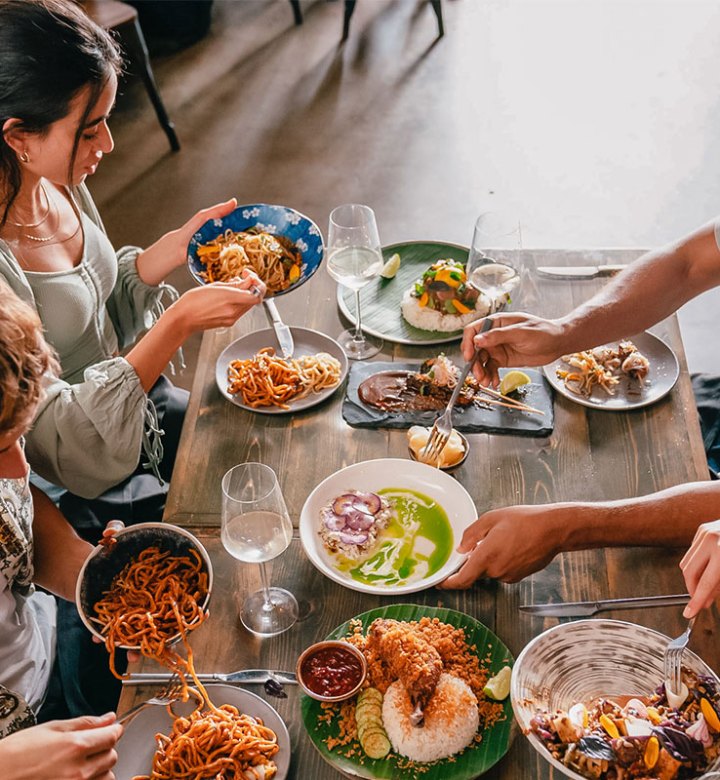 Dija Mara is an absolute must, due to its unique, Balinese-inspired menu and natural wine selection. Awarded Best Restaurant of 2019 by Eater San Diego and a Bib Gourmand nod from the Michelin Guide in 2021, your palate is truly not prepared for the deliciousness (and funky décor) that awaits. Our recs include the pillowy grilled roti with vegetarian rendang curry, the mie goreng spicy noodles with confit chicken and the pork belly skewers with peanut aioli, aka the most tender, succulent pork belly we’ve ever eaten. 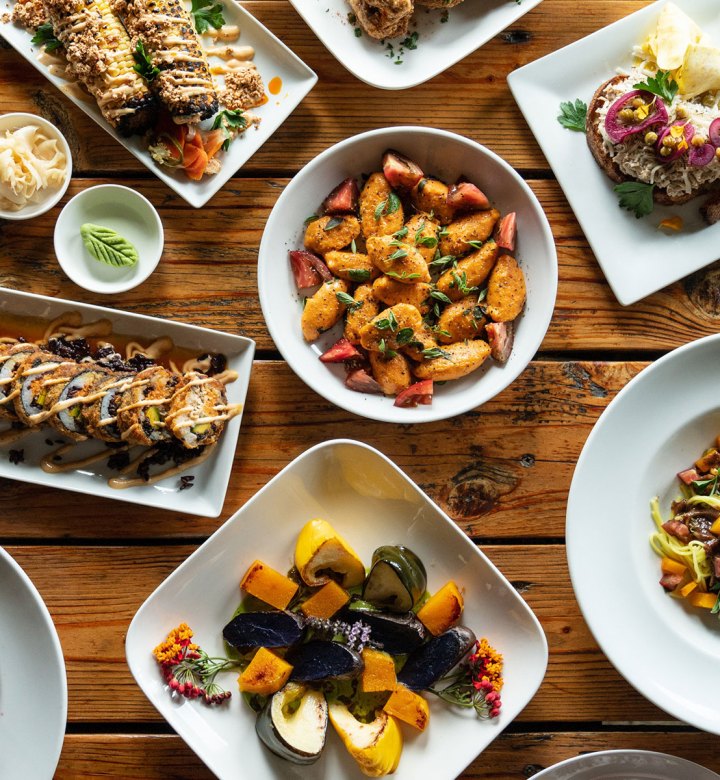 Visit Oceanside; an assortment of vegan dishes from The Plot

Plant-based folks will positively swoon over The Plot, a vegan restaurant that runs on an impressive zero-waste business model that will blow your mind. Herbs, flowers and even produce is grown in an on-site garden, and every crumb of food is totally utilized, down to the leftover Plot Cake crumbs that are repurposed into the house dairy-free cheesecake’s crust. Our favorites include the shockingly crispy carrotfish tacos, the cheesy truffle fries and the hot chicken sando with tarragon potato salad.

For date night, Piper’s All-Access chef’s tasting at The Seabird Resort’s The Pass won’t disappoint. For just $90—a fraction of what many restaurants charge for a five-course menu of this caliber, let alone one with a wine pairing—you’ll get a front-row seat at the resto’s open-air kitchen, where you’ll get to watch in awe as the hotel chefs prepare your meal and discuss with you their inspiration behind the courses. The menu is decidedly seasonal and highlights remarkably fresh local fare. Our favorites from the winter selection include a decadent butternut squash soup topped with pepitas and torched meringue, jellied chicken stock with crème fraiche and caviar and a modern twist on fruitcake. 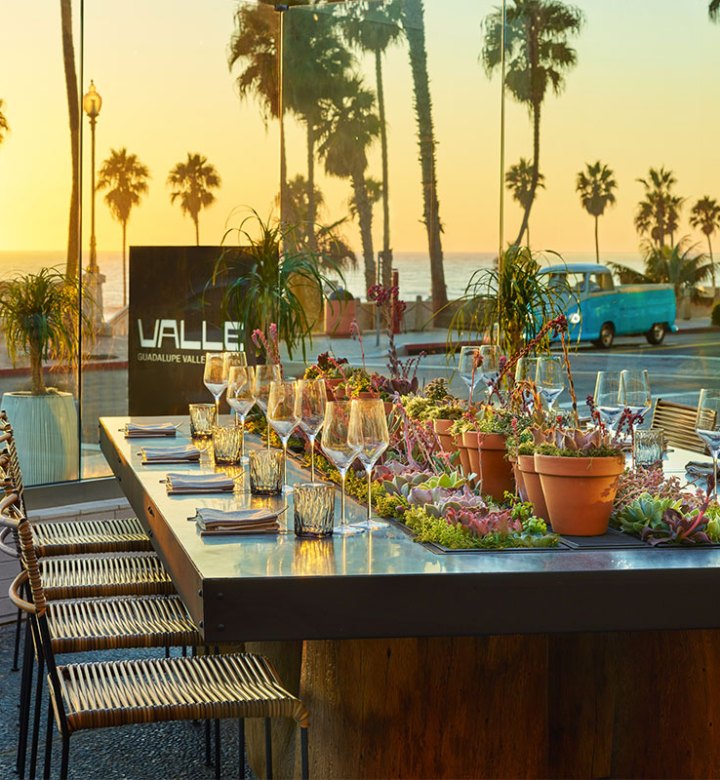 For a splurge, make a reservation at Michelin-recognized Valle, the brainchild of Chef Roberto Alcocer. Taste your way through a Baja-inspired menu that’s prepared with only the freshest local ingredients, including a rotating fish special made with the catch of the day. You can also opt for the eight-course tasting menu over a la carte to have the chef do all the choosing for you.

Early risers will adore the playful breakfast menu at Mission Pacific Hotel’s High/Low, which offers everything from tri-tip chimichurri breakfast hash to sourdough French toast, complete with local strawberries and rhubarb curd. They craft killer lattes with house-made flavor syrups, but if you’d prefer your java from a standalone shop, tackle Oceanside’s Craft Coffee Trail to find your favorite brew. 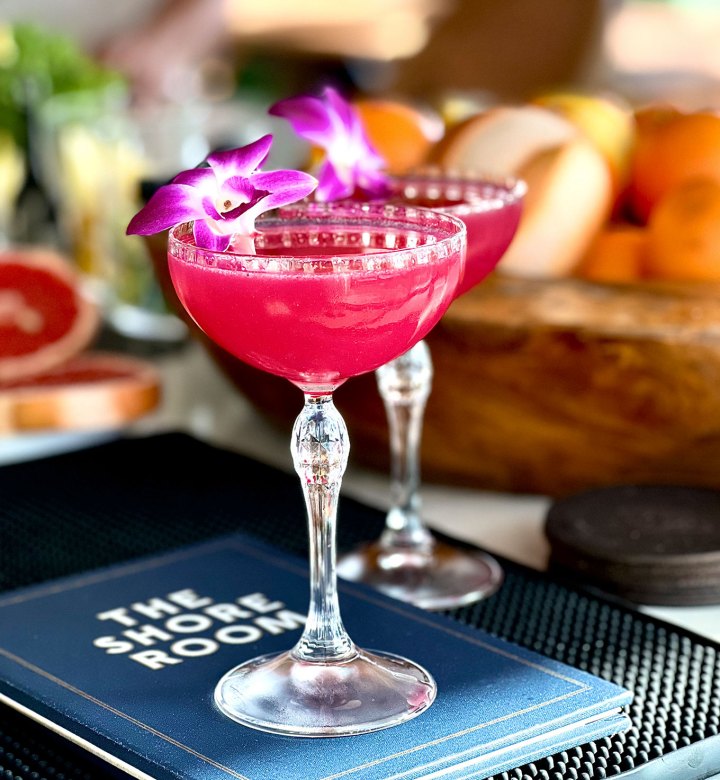 The Seabird Resort; The Maiden Voyage at The Shore Room

As for cocktails, we were blown away by the libations at The Shore Room at The Seabird Resort. Snuggle up in a cushy lounge chair on the toasty outdoor patio and take your pick from maritime-themed drinks like the Maiden Voyage—a mix of hibiscus vodka, lychee, prosecco and lime—and the Loose Cannon, a mix of seaweed-infused gin, Lillet Blanc, falernum, Drambuie and fire bitters.

(Oh, and lest our East Coast friends forget: You’re never too far from an In-N-Out.) 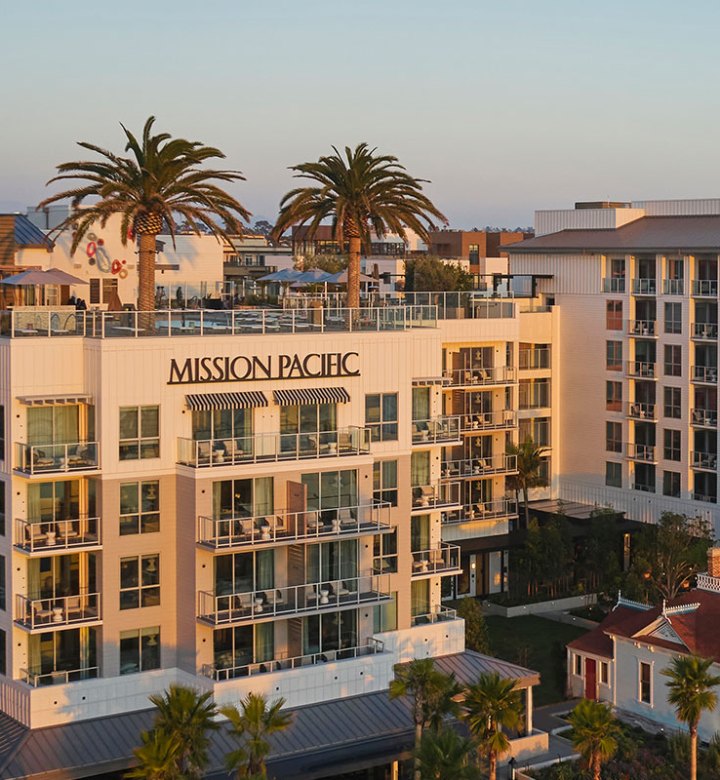 Where to Stay in Oceanside, California

If you’re traveling sans-kids, there’s no better option than Mission Pacific Hotel. Chic yet relaxed, warm and inviting, this boutique stay is brimming with local treasures to uncover. The ocean views are positively unmatched; nothing beats taking in the breeze from your room’s expansive balcony. The Mission Pacific is also home to The Rooftop Bar (among many other restos) where guests can soak up unobstructed views of the ocean, pier and sunset while enjoying next-level cocktails and bites. (The salmon crudo and pomegranate-kissed oysters are essential in our book.) 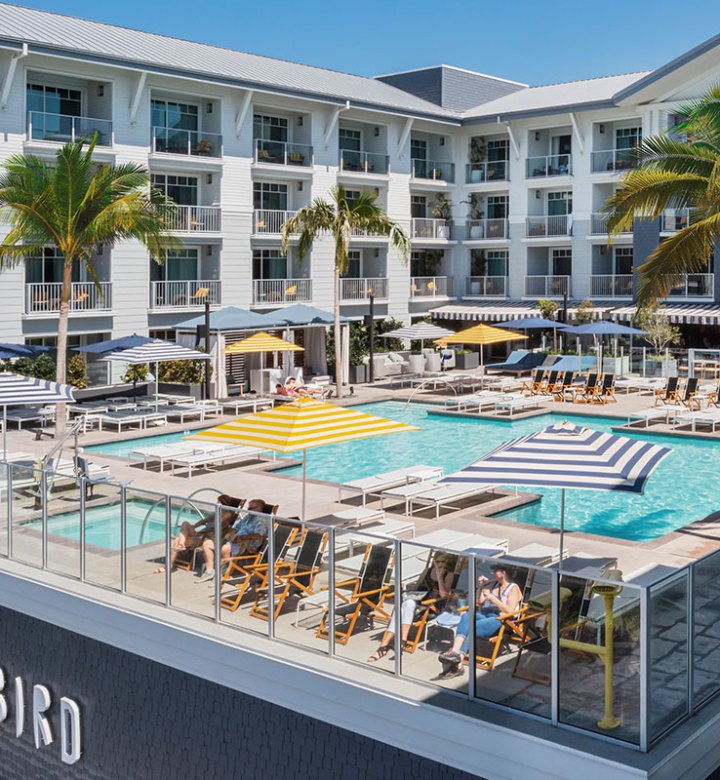 If you’re visiting as a family, stay at The Seabird Resort. Reminiscent of a cozy SoCal estate on a larger scale, this resort has a stunning outdoor pool complete with cabanas, a contemplative library, homey fireplaces and so much more. These sister hotels are both very new and as close to the beach as you can get in O’Side; they also pride themselves on working with local farms, artists and purveyors in order to give back to the community. Best of all, guests at either location can enjoy all amenities at both hotels, from the spa to top-notch eateries and bars. And since the hotels are located across the street from each other, you can take advantage of all they have to offer without venturing too far.