Lots of factors can inform your vacation plans: the ease of transportation, the accommodation options, the local food. And for some there’s an added dimension: How friendly, inclusive and just plain fun is it for LGBTQ travelers? From stellar nightlife to insider tours to community-focused programs, these destinations don’t just welcome non-hetero and non-cis visitors—they cater to them.

Your Next Weekend Escape Toronto 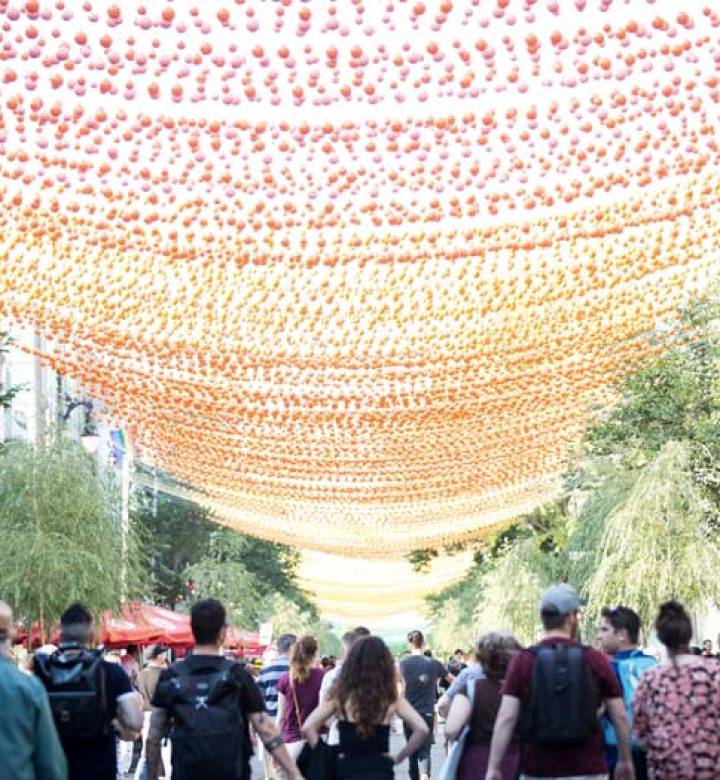 For a destination that feels farther away than it is—a 90-minute nonstop flight from NYC—head to Quebec’s largest city. Its cobblestoned streets, French-Canadian accents and serious culinary scene make it feel like a trip to Europe without leaving North America. The city’s Gay Village, thought to be the largest in North America, is home to tons of bars, restaurants and nightclubs that cater to the LGBTQ community, as do many of the city’s celebrations, including Montreal’s Fringe Festival and Piknic Électronik.

Stay: The glam W Montreal, centrally located between Old Town and downtown, gives you a chic weekend vibe amidst the city’s Old World feel. In addition to the sexy on-site cocktail bar and spa overlooking Victoria Square, the hotel hosts the “Queer Me Out” panel series, igniting conversations about the LGBTQ community in fashion, music, art and politics.

Do: Be sure to catch the infamous Drag Race at Montreal’s Fringe Festival, which runs from May 27 to June 16, 2019. The competition includes teams of drag queens competing in obstacle courses, audience makeovers and lip-sync battles. 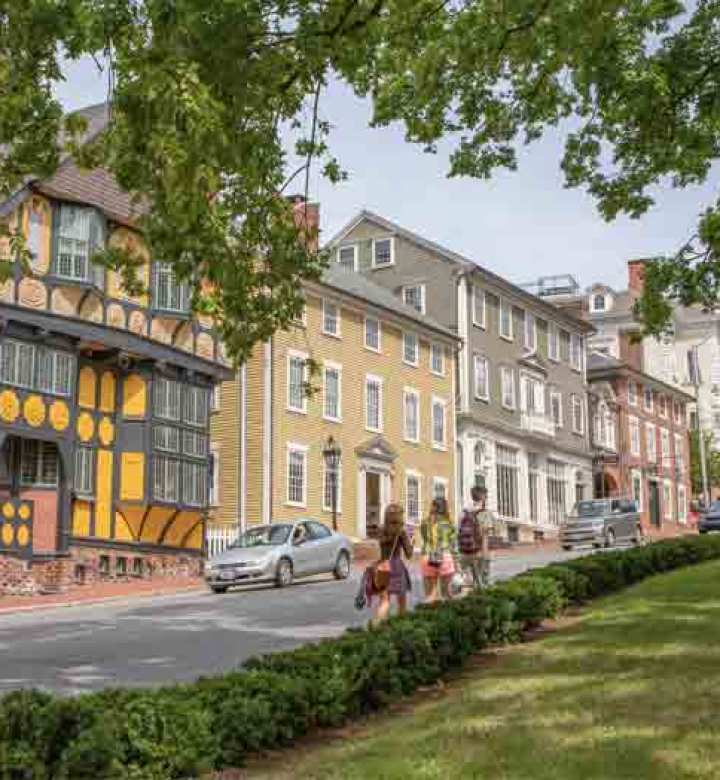 Get your fill of New England charm with a weekend in the historic capital city of Rhode Island. Though you might be more familiar with the yacht-filled seaside city of Newport, Providence offers that same laid-back Northeast lifestyle alongside some serious design eye candy. The city is home to the renowned Rhode Island School of Design, the annual WaterFire art installation festival and an LGBTQ Film Festival—as well as artisanal coffee shops, gay-friendly bathhouses and an underground music scene.

Stay: Inspired by art, creators and inventors, The Dean offers serious style. As they say on their website, “If you’re like me and enjoy a solid art history debate, a perfectly fluffed white duvet, a scotch—neat—and (after a few too many) a wee bit of karaoke, then The Dean is a place for you.” Take up residence at this boutique hotel and be sure to stop for a cup of Bolt Coffee in the morning.

Do: After taking a self-guided walking tour to see the 18th- and 19th-century architecture of the city, stop in the RISD Museum to view its permanent collection of more than 100,000 pieces of art. 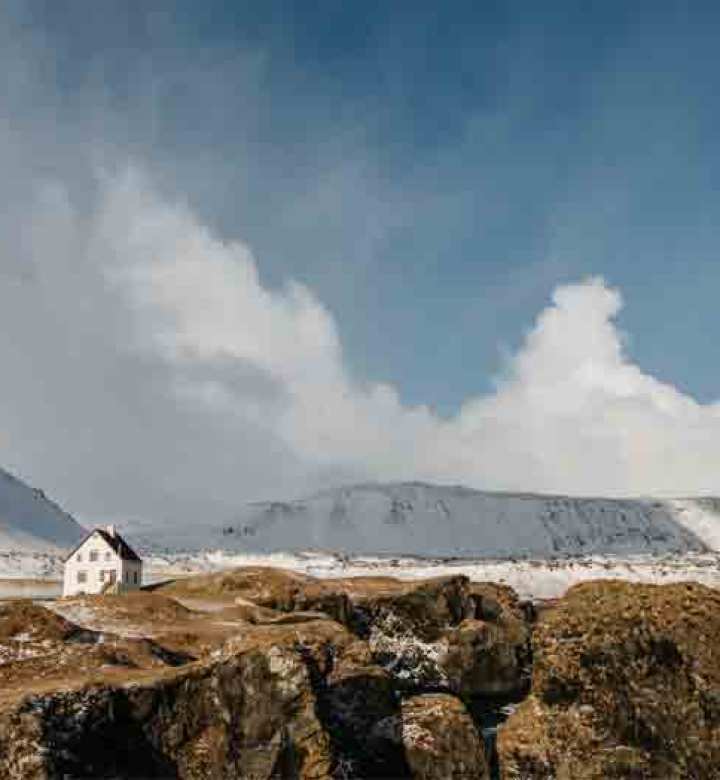 Hopping a flight to Iceland is almost as easy as grabbing the jitney to the Hamptons, but in just over four hours, you’ll land in this island nation where weekend activities include everything from hiking a glacier to spotting the northern lights and hitting a gay bar. In case you’re wondering about their LGBTQ community, listen to this: Iceland was the first country to have an openly lesbian head of government. Plus, 2019 is the 20th anniversary of Iceland’s Pride festival, making this a particularly celebratory year to head north.

Stay: If you’re going to stay in Iceland, you might as well exude Icelandic style, which takes you straight to Canopy by Hilton. The design- and tech-forward hotel makes seeing the city easy with its central location and complimentary bicycles for pedaling through the streets. Plus, there is a daily tasting in the bar of local beers and spirits, so be sure to toast with your fellow

Do: Pink Iceland is the country’s leading LGBTQ-owned tour operator, with gay-specific experiences, tours of popular destinations like the Golden Circle, and local LGBTQ guides to let visitors in on hidden gems. Fascinatingly enough, there’s no gay district in Reykjavik—the city is known for being so inclusive that you’ll find the gay community pretty much everywhere. 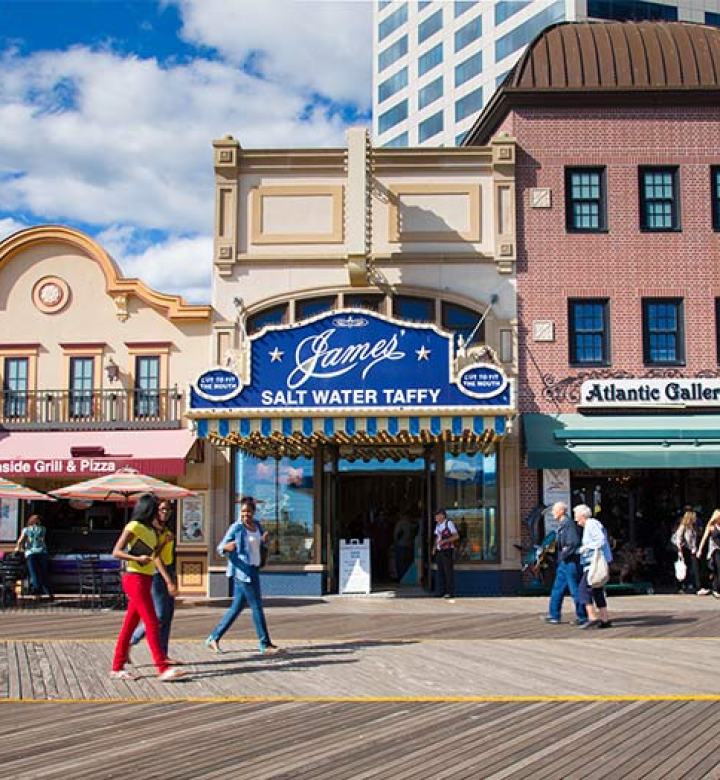 Looking for the escapism of Vegas without the plane ticket? Take the three-hour drive south to Atlantic City, home of resorts, casinos and seaside fun. Though the gaming culture is on the decline, the getaway experiences are growing. Some of the world’s top DJs play the city’s major nightclubs, high-end spas draw wellness travelers, and water lovers can partake in expansive beaches.

Stay: Borgata Hotel Casino & Spa offers everything a guest could ask for in a resort: on-site concerts, a pampering spa, cocktails, party-ready nightlife and packages—like Out at Borgata—geared toward elevating the LGBTQ vacation experience.

Do: After wandering the boardwalk, hitting the pool and sipping cocktails, plan to take in a show. Borgata hosts concerts from famed entertainers beloved by the gay community, like Lady Gaga, Boy George, Cyndi Lauper and Countess Luann de Lesseps. 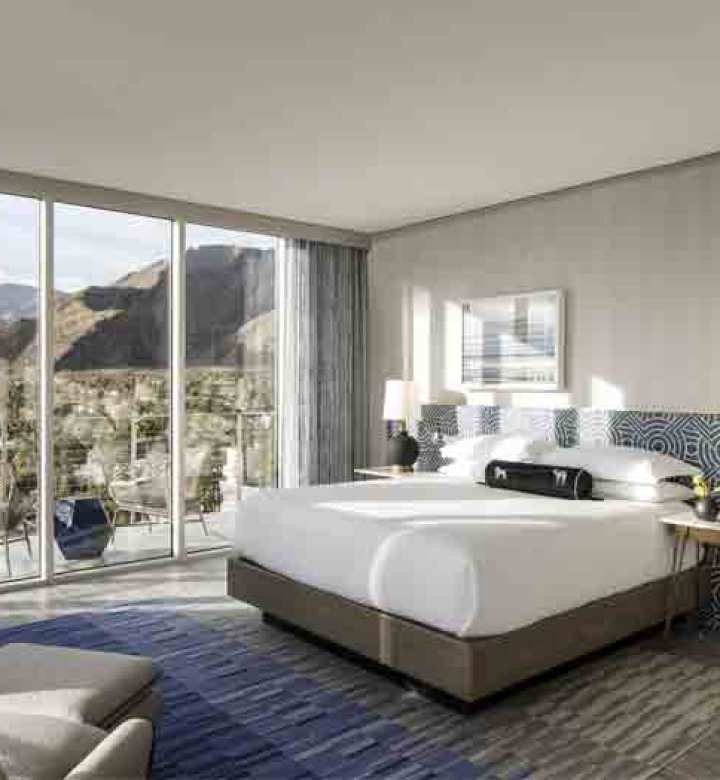 Though a five-hour flight may seem like a lot for a weekend getaway, we promise the journey is worth it to this historically gay-friendly destination in the California desert. From chic hotels to restaurants and shops, tons of the city’s establishments support LGBTQ rights (like Chad Gardner, chef-owner of 533 Viet Fusion, who’s been an outspoken advocate in the community). No wonder the town has become a popular place for same-sex weddings.

Stay: The newly opened Kimpton Rowan Palm Springs offers up quintessential mid-century modern Palm Springs design alongside urban details like the city’s only rooftop pool and, of course, plenty of Pride. The hotel partners with the Trevor Project and lays claim to the city’s Colette Miller angel wings from the Global Angel Wings Project.

Do: Take a day to head to the nearby Joshua Tree National Park, where fantastical trees paint the landscape and the whimsical Pioneertown makes the getaway truly an oasis. 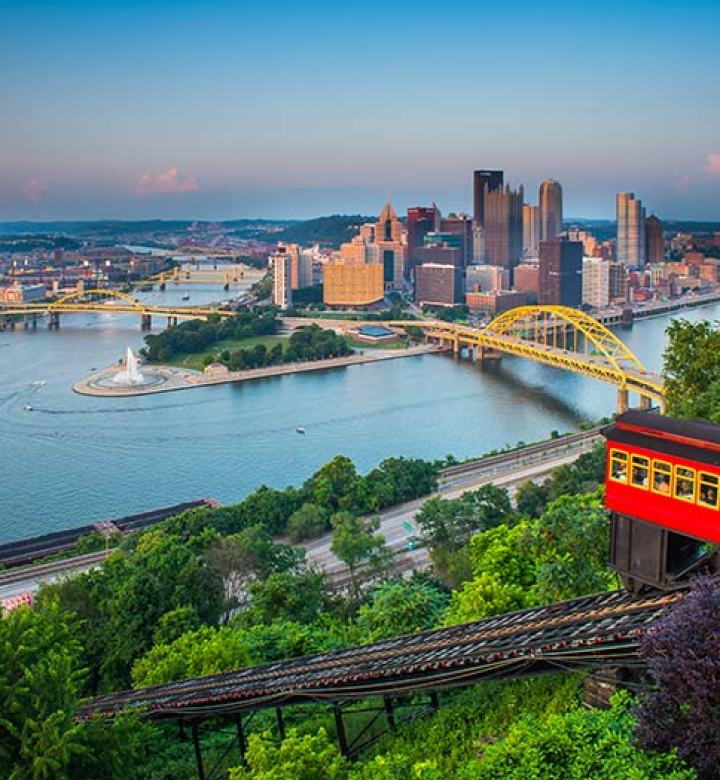 The Iron City has clearly loosened its grip—these days, it’s teeming with nightlife, chic restaurants and a vibrant cocktail scene. The hometown of Andy Warhol, just a 90-minute flight away, is closely tied to the arts, including music, theater and dance, thanks to endowments from 19th-century industrialists that sparked the city’s passion for everything from jazz and literature to Wiz Khalifa, who famously wrote the song “Black and Yellow” in tribute to his hometown.

Stay: The Ace Hotel brings its creative energy to the East Liberty neighborhood, where it has set up shop in a former YMCA building. The original gym now hosts the hotel’s events, including stand-up comedy performances, a speaker series and monthly dodgeball games.

Do: Pay homage to the inventor of pop art at the Andy Warhol Museum. Not only will you take in a curated collection of his art, including early drawings and films, but the organization supports numerous LGBTQ initiatives, like an LGBTQ Youth Prom and regular cabaret and contemporary queer performances. 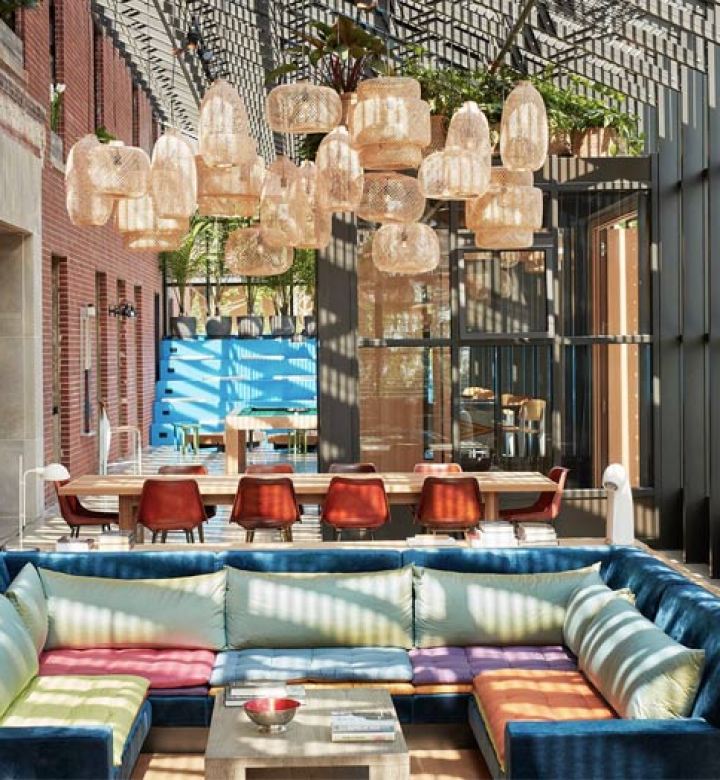 Courtesy of the Asbury Hotel

This popular Jersey Shore getaway draws city dwellers and young families to its idyllic setting on the Atlantic. A summer destination full of ice-cream shops and boardwalk fare, it’s long been known for its music scene, which gave us both Jersey native Bruce Springsteen and the Paradise Nightclub, housed in a gay-friendly resort. Today, the seaside town’s history is very much alive, but so is its reinvigorated resort culture, with newcomers like Asbury Lanes and MOGO Korean Fusion Tacos enticing a new generation of beachgoers.

Stay: With a rooftop lounge, outdoor movie theater and colorful, eclectic decor, The Asbury has become a hot spot for LGBTQ weekenders. The hotel hosts tea, dance happy hours, drag brunches and parties with appearances from entertainers like DJ Lina.

Do: Beyond relaxing on the beach and sipping cocktails while listening to live music, you can support services and programs dedicated to the LGBTQ community by attending the Garden State Equality Ball at Asbury Lanes on May 31. It’s a weekend getaway you can feel extra good about.

travel
by Dana Dickey
10 Travel Duffel Bags Our Frequent-Flying Editors Won’t Leave Home Without
travel
by Stephanie Sengwe
23 Cheap Family Vacations You Haven’t Thought of Before
travel
by Dana Dickey
Rare Superbloom Could be Coming to California This Spring—Here’s Where to See the Spectacular Display
travel
by Rachel Bowie
Why the ‘Buffer Day’ Is the Secret to a Better Vacation
travel
by Sarah Ashley
The 15 Biggest Ferris Wheels in the World, Ranked from Huge to Absolutely Massive
travel
by Lindsay Cohn
The 12 Best South Carolina Islands to Visit