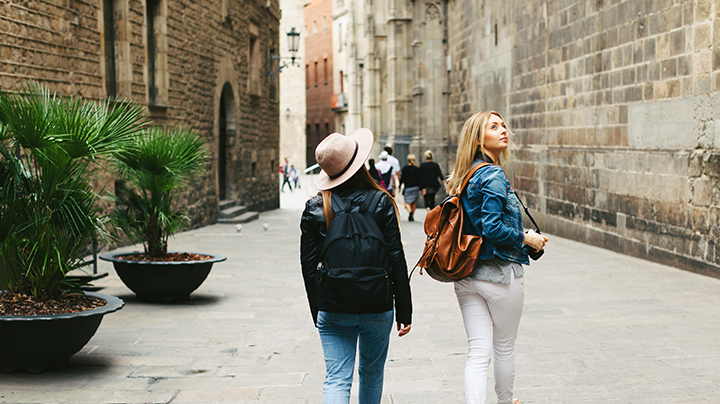 Whenever a friend starts describing her upcoming vacation plans—say, the adorable beach bungalow she rented or markets she’s planning to explore—it’s hard not to feel a twinge of envy. That is, until she asks, “Wanna come?”

That’s become a common refrain among many globetrotting 20- and 30-somethings, who are treating their travels like open houses: Here’s where I’ll be all week—feel free to join!

Take Sara, a friend of a friend and frequent traveler who decided to go to Paris over Thanksgiving week last year. She booked her flights first, then mentioned it to a handful of friends. By the end of the week, three other women had opted to tag along.

It’s a refreshing alternative to the Big Group TripTM, which requires syncing up everyone’s schedules, finding an Airbnb big enough to house a dozen people and fighting over the bathroom every morning. (Looking at you, destination bachelorette parties.) Solo travel, particularly among women, is on the rise, but that comes with its own set of challenges, from shouldering lodging costs on your own (particularly if your dirt-cheap hostel days are behind you) to more serious concerns about safety.

Think of the drop-in vacation as the middle ground between the two.

Here’s how it works: A host (or hosts, who might be a pair of friends or a couple) locks in the dates of a trip, including flights if applicable. Then she casts out lines to anyone she could picture joining her: a previous travel buddy, a sibling who lives in another state, a new work friend. And the kicker: The invitees are totally welcome to bring along friends of their own (within logistical reason, of course—you’re not aiming for a posse the size of a soccer team here). There’s no expectation to stay for the duration of the trip, either, so people can use as many or as few vacation days as they like.

Lodging with a little wiggle room is ideal—say, a house with a few bedrooms and fold-out couches, or an inexpensive hotel with plenty of open rooms—but it’s not the end of the world if everyone’s not under the same roof.

And from there, everyone…does whatever they want. Someone’s dying to hike up a volcano while everyone else lounges by the pool? Go for it. Strong opinions about the relative worth of the modern-art museum versus the anthropological institute? To each her own. Picky eaters not comfortable with the street-food tour you suggested? Don’t invite them on the trip. (Just kidding—they can hunt down the local vegan fare.) As I joked in a recent email chain about an upcoming Mexico City trip (with one person I know well and two I don’t): “Everyone should be able to have their ideal food journey!”

Yes, there’s always a chance that you won’t jibe with a few of your travelmates, but removing the burden of doing things together does wonders for minimizing conflict. And, more likely, you’ll get to know people quickly and closely in a way that only happens when you’re together in an unknown place, and maybe have your eyes opened to experiences you’d never have thought of. (Shout-out to my friend’s friend Arielle, who had the idea to go to a lucha libre fight.)

Granted, you have to be OK with the possibility that your chosen dates might not work for anyone else. In which case…you still get to take a vacation.

The 5 Destinations Travel Bloggers Are Dying to Visit This Year