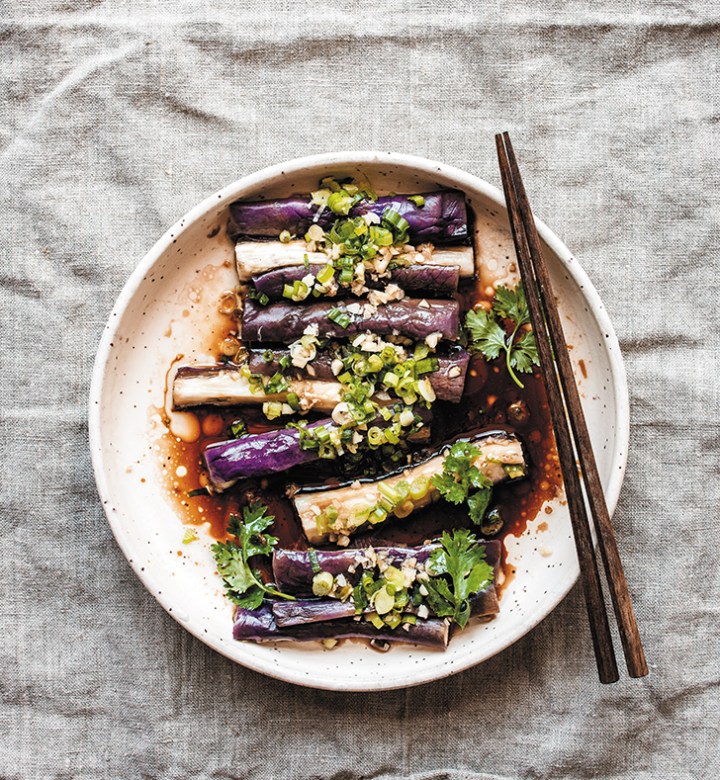 Eggplant is one of those polarizing vegetables—people either adore its soft, spongy texture…or absolutely detest it. For those in the latter camp, we recommend trying this recipe for liáng bàn qié zi, or seasoned steamed eggplant, from Betty Liu’s upcoming cookbook My Shanghai.

“I used to dislike eggplant,” Liu writes, “until I discovered the steaming method. Eggplant is often fried with a lot of oil and ends up being too heavy for my tastes, but steamed eggplant is light and a wonderful vessel to soak up sauce. It’s a fast way to cook eggplant, and even more important, the texture transforms and becomes silky soft, tender and creamy.”

According to Liu, the first step in this recipe—soaking the eggplant in vinegar water—is a trick to retain the vegetable’s gorgeous purple color (otherwise it will turn brown). If you’re short on time, you can skip it, since it has no effect on the taste.

From the book My Shanghai by Betty Liu. Copyright © 2021 by Betty Liu. Published by Harper Design, an imprint of HarperCollins Publishers. Reprinted by permission.

2 eggplants (about 12 ounces/350g total), such as Japanese or Chinese varieties

2 tablespoons neutral cooking oil, such as canola or grapeseed oil

1. Cut off the base of each eggplant, then cut each eggplant into 3 equal segments. Halve each segment lengthwise so that you have 6 pieces total per eggplant.

2. In a large bowl filled with water, add the white vinegar and the eggplant pieces. Let them sit in the vinegar water for 10 to 15 minutes.

3. Fill a wok or large, high-sided skillet with 2 inches of water, and set a bamboo steamer on top. Bring the water to a boil over high heat. Place a layer of eggplant skin-side down in the steamer, then pile the remaining pieces on top (see Note), working in batches if necessary.

4. Cover and steam the eggplant over high heat until soft and easily pierced with a chopstick, 5 to 7 minutes. The texture should be silky soft and creamy but still firm enough to hold its shape. Transfer the steamed eggplant to a colander to cool slightly.

6. When the eggplant is cool enough to handle, tear each piece lengthwise into strips about ⅜ inch wide. Arrange the eggplant strips on a plate. Pile the ginger, half of the scallions and the garlic in the center of the eggplant.

7. In a small saucepan, heat the oil until it bubbles when a chopstick is inserted, about 3 minutes. Pour the hot oil over the aromatics. They should sizzle and release a gorgeous fragrance.

8. Drizzle the soy sauce mixture and chili oil, if using, over the eggplant. Top with the remaining scallions, the toasted sesame seeds and cilantro leaves. Serve immediately at room temperature.

Note: When layering eggplant in the steamer, piling the pieces yields the best result. Place the bottom layer skin-side down to prevent oversteaming, then pile the other eggplant segments on, crisscrossing them to create air pockets so steam can reach every piece.