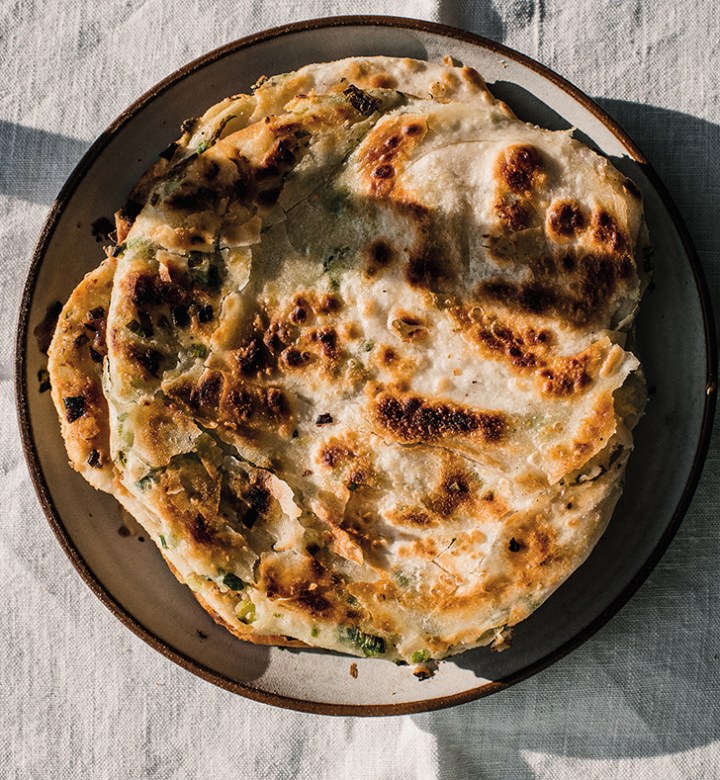 Behold cōng yóu bǐng, aka scallion pancakes: They’re crispy on the outside, chewy and layered on the inside, and speckled with savory, oniony flavor, waiting to be dipped in a gingery, garlicky sauce. Make this Chinese flatbread at home with Betty Liu’s recipe, from her new cookbook, My Shanghai.

“Everyone has a favorite version of scallion pancakes,” she writes. “It’s one of those popular treats that people get into arguments about because there are so many versions. This my favorite scallion pancake, modeled on the street-style ones I’ve had in Shanghai.” Because of recent crackdowns on street-food vendors in Shanghai, Liu explains, only a few traditional vendors are left. “There are always long lines of locals and tourists waiting for their happy pancakes. I love them, too, but sometimes after eating them, I feel as if I’m covered in grease. This recipe is my happy in-between: It has all the scallion flavor but less grease.”

“The secret,” she says, “is 油酥, you su or ‘oil paste,’ which holds all the flavor. I use scallion oil as the base of my you su, so the scallion flavor is doubled without doubling the number of scallions in the pancake. Too many raw scallions can expel too much water, causing the pancake to be soggy. This way, both the flavor and the texture are optimized.” Genius, if you ask us.

From the book My Shanghai by Betty Liu. Copyright © 2021 by Betty Liu. Published by Harper Design, an imprint of HarperCollins Publishers. Reprinted by permission.

15 Traditional Chinese Food Dishes You Need to Try, According to a Chinese-Malaysian Chef

4 tablespoons vegetable oil, plus more for the work surface

Neutral cooking oil (such as canola or grapeseed oil), as needed for greasing and frying

1. Make the Dough: In a large bowl, mix together the flour and salt. Slowly stream in the water while stirring with chopsticks. Continue to mix until a workable dough forms.

2. Knead until the dough is smooth and shiny (光滑, guang hua) and begins to pull away from the side of the bowl, 15 minutes by hand or 7 to 10 minutes in a stand mixer fitted with the dough hook attachment. If the dough feels too sticky to knead, very lightly flour your hands. If the dough is too dry, add more water, a teaspoon at a time, and work it into the dough completely before adding more. Wrap the dough in plastic and let it rest at room temperature for 1 hour, or in the fridge for up to 1 day.

4. Make the Dipping Sauce: In a small bowl, whisk together the black vinegar, soy sauce, sugar, garlic and ginger and set aside.

5. Assemble and Cook: Preheat the oven to 200°F. Set a wire rack onto a baking sheet and place it in the oven. Divide the dough into four equal parts. Work with one quarter at a time, keeping the other parts covered with plastic wrap or a damp dishtowel. Use your hands to shape a piece of dough into a log. On a lightly greased work surface, use a rolling pin to roll out the log into a rectangle that is approximately 12 by 4 inches. The precise dimensions don’t matter too much; the important thing is to roll the dough into a thin rectangle, with a long side nearest you.

6. Thinly spread one-quarter of the oil paste on the surface of the dough, avoiding clumps. (It’s okay if you have some spots without oil paste.) If using, place ½ teaspoon of the lard in the center of the rectangle. Evenly sprinkle one-quarter of the scallions over the dough in an even layer.

7. Fold the rectangle into thirds as if you were folding a letter. Starting from one of the short sides, roll up the dough into a short log. Stand the log vertically so that the spiral faces up. Place your palm over the spiral edge and press down to flatten it into a circle.

8. Use the rolling pin to gently roll the dough into a 7- to 8-inch round, about ¼ inch thick. If the dough springs back, reverting to its original size before you fry the pancakes, let it sit, covered, for 5 minutes, then roll it out again. Repeat with the remaining dough to create 4 discs.

9. In a skillet large enough to comfortably hold an 8-inch pancake, heat 2 tablespoons of oil over medium-high. It’s important not to have the heat too high, as you don’t want to burn the pancake or create scalded spots. When the oil shimmers, gently slide in a disc of dough. Cook for about 1 minute, then reduce the heat to medium-low and cook with the lid on for about 2 minutes more. The bottom should be golden and slightly puffed.

10. Using a spatula, carefully flip the pancake and cook for about 2 minutes more with the lid on. Remove the lid, increase the heat to medium-high, and cook until crispy on the bottom, about 2 minutes more. Use tongs or two spatulas on opposite sides of the pancake to expose more layers. Remove the pancake to the rack in the oven to keep warm. Repeat with the remaining discs of dough. Serve the pancakes hot, cut in wedges—or simply ripped apart—with the dipping sauce. Keep leftovers in the fridge. Reheat in the oven or on the stovetop.