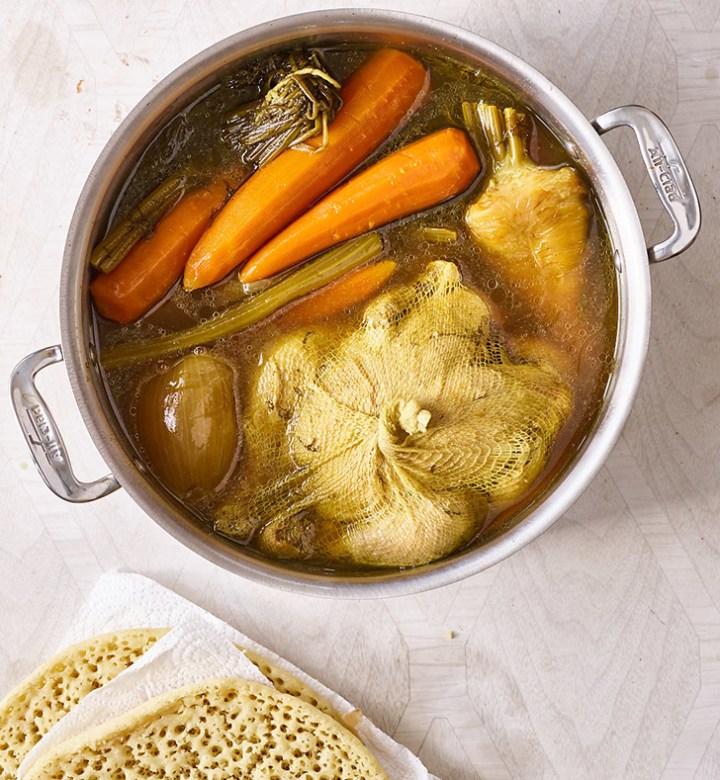 Two things we love: A good soup recipe and a good cause. You’ll find both in the upcoming JASAEats Recipe Book, which includes this overnight chicken soup from chef and cookbook author Adeena Sussman.

It’s all to benefit JASA, an agency that serves older adults in New York City, and its JASAEats Campaign, which raises awareness about food insecurity among seniors and critical funds to provide meals for older New Yorkers. (FYI, since March of this year, JASA has seen the number of urgent requests from seniors and their families triple, with 95 percent of these requests about food.)

The book will feature recipes like this nourishing (and super easy) soup, all submitted by JASA seniors, staff and volunteers; chefs like Sussman, Mandy Silverman and Alejandra Ramos; influencers like Alexa Matthews of @eatingnyc; and beloved NYC restaurants. Psst: You can submit your own recipe for a chance to be included in the book or on JASA's Instagram by filling out this Google form by December 21st.

Now…about that soup. We’re going to need a bigger bowl.

50 Winter Soups You Can Make in 30 Minutes

2. Add the carrots, celery, onion, parsnip, turnip and garlic to the pot, and add enough cold water to cover everything by 3 inches. Bring to a vigorous boil over high heat, and boil, skimming and discarding anything scum that rises to the top, 15 to 20 minutes. Reduce the heat to a simmer, add the dill, and cook, checking every so often that the soup is moving with very small bubbles but not boiling.

3. After simmering for about 2 hours, add the salt. Cover with a tight-fitting lid and cook for a total of 12 hours (either a whole waking day or overnight). Skim off the fat from the top occasionally, reserving that fat and broth with it in a bowl in the fridge. (When it hardens, tip the bowl back into the soup; the broth slips out from underneath the disc of fat, which you can use as schmaltz (chicken fat) in other recipes.

4. When ready to serve, remove and discard the dill. Transfer the chicken to a bowl, cut the cheesecloth open to help it cool, then tip any broth back into the soup. Remove and discard the skin and cheesecloth. Take all the meat off the bones, discard the bones and portion the meat into bowls with the broth and vegetables (leave them whole, or cut them into large pieces if you like). Season with more salt if needed.