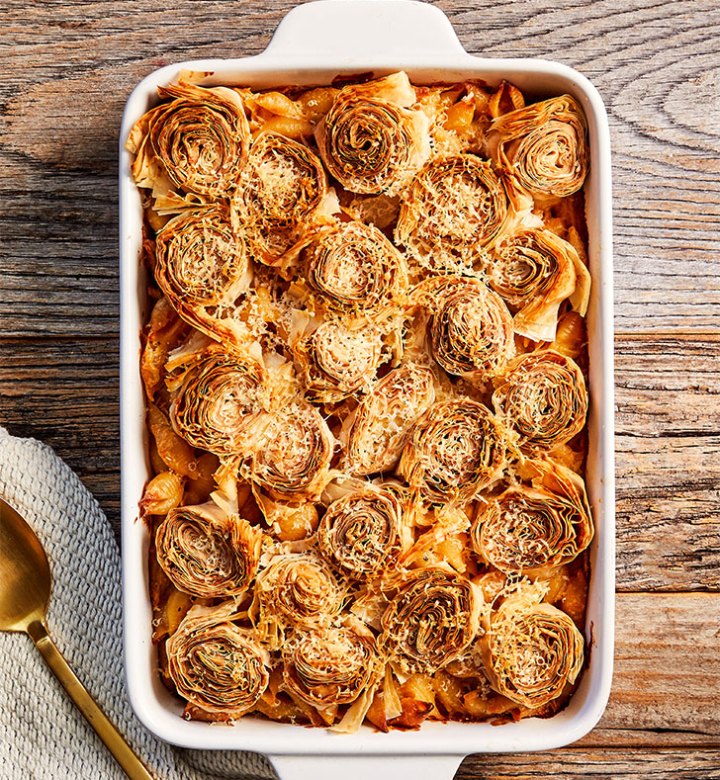 It may be frigid outside, but our hearts are warm, thanks to recipe developer Erin McDowell’s mac and cheese with crispy Parmesan-phyllo crust. The decadent, cheesy pasta is just waiting to emerge from that gorgeous blanket of phyllo rosettes.

“Sometimes when mac and cheese has a crispy topping like bread crumbs, there’s either so much of it and it’s dry, or there’s not enough,” McDowell says. “With all the layers of phyllo, you feel like you’re getting enough topping, but it doesn’t dry out.”

To really impress, McDowell rolled the phyllo into really beautiful (but easy to execute) rosettes, but for an easier take, after you make the layers, you could just put the whole thing on top and bake it that way.

“Every layer of phyllo is brushed with butter and sprinkled with Parmesan cheese,” she continues, “so it gets crispy on the top but almost stays soft in the center, and as you go to eat it, the phyllo crumbles in the same way a garlicky bread crumb would but stays moist and absorbs the flavor of the cheese as well.”

Is it weird that we want to marry this dish?

1. Make the Mac and Cheese: In a large saucepan, melt the butter over medium heat. Add the onion and sauté until translucent, about 5 minutes. Add the garlic and cook until fragrant, about 1 minute more.

3. Bring a large pot of salted water to a boil. Add the pasta and cook until al dente, or according to the package’s instructions. Drain well.

4. Put the sauce back on the stove over medium-low heat. Stir in the cheese until it melts, then season with salt, pepper, paprika and mustard. Remove from the heat and stir in the pasta

5. Pour the mixture into a 9-by-13-inch baking dish. Preheat the oven to 350°F. Set the dish aside while you prepare the crust.

6. Make the Phyllo Crust: Unfold the phyllo sheets and cover them with a damp towel. Have ready the melted butter and a pastry brush.

7. Place a sheet of phyllo on your work surface (keep the remaining sheets covered so they don’t dry out) and brush it all over with butter. Grate Parmesan cheese lightly over the whole piece of phyllo.

8. Place another piece of phyllo on top. Brush with butter all over and sprinkle with more Parmesan. Repeat with 2 more pieces of phyllo. Working across the long side, cut the phyllo into ½-inch strips, then roll each strip into a rosette and place it on top of the mac and cheese.

9. Repeat steps 7 and 8 with the remaining 12 sheets of phyllo, placing the rosettes on the mac and cheese until it’s completely covered.

10. Transfer to the oven and bake until the crust is evenly golden brown, and the mac and cheese sauce bubbles up at the edges, 40 to 45 minutes. Cool for about 5 minutes before serving.

Note: For a simpler crust, you can simply lay the strips of phyllo over the mac and cheese with the layers facing up (instead of making rosettes), until it’s completely covered.