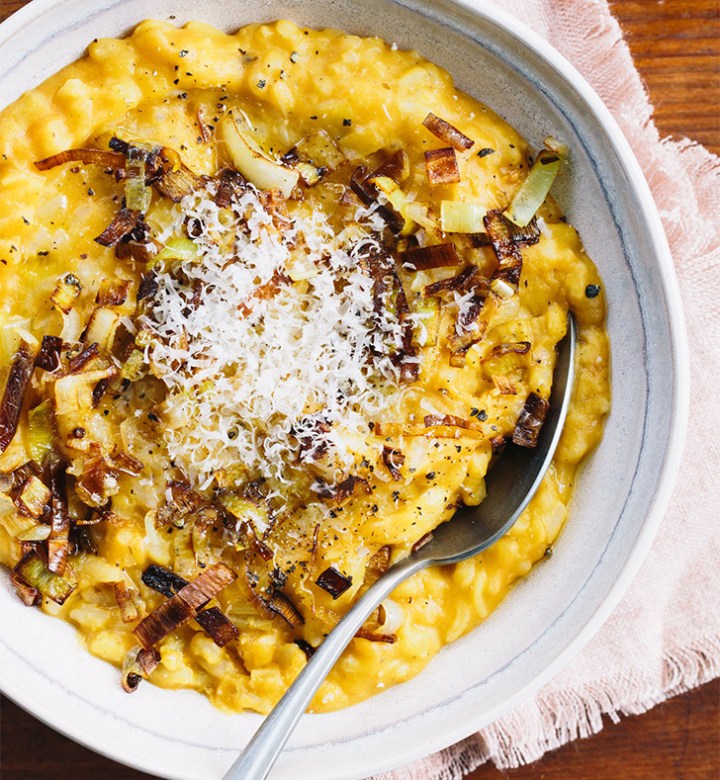 Risotto is the ultimate comfort food, even when unadorned. But recipe developer Erin McDowell just fall-ified the dish with butternut squash and a crispy leek topping, and now we officially can’t get enough. Thankfully, her method is foolproof.

“You roast butternut squash, then puree it with chicken broth and use that as the liquid to make the risotto,” McDowell tells us. It’s an extra step, yes, but worth it when the final result is so creamy and savory-sweet. (Want to make this vegetarian? Just use vegetable broth.)

“I grew up eating lots of leeks,” she continues, “and my parents grew them in their garden, so I love using them in the fall when they’re in season. They are very sweet and go well with the texture of the rice, but I also like to save some for a crispy topping. Because they’re so papery, leeks crisp up faster than onions. It seems like a time-consuming step, like caramelizing onions, but it’s actually very quick and they make a great garnish.”

Our weeknight plans? You already know.

1. Make the Risotto: Position a rack in the lower third of the oven and preheat it to 375°F. Place 2 tablespoons (30g) of the olive oil on a baking sheet and spread it around to coat the tray evenly.

2. Place the butternut squash halves cut side down on the prepared baking sheet and move around to coat the surface well with oil. Roast until the squash is very tender, 40 to 45 minutes. Use tongs to gently turn the squash over on the baking sheet. Season with salt and pepper, then spoon any remaining oil in the pan over the squash, letting it collect in the place where you scraped the seeds away.

3. Let the squash cool until it’s easy to handle, then scoop the flesh into the bowl of a food processor. Add the broth and puree until smooth. Transfer to a small saucepan and keep warm (not simmering) over low heat.

5. Add the rice and cook, stirring constantly, about 1 minute. Add the white wine and bring to a simmer over medium-low heat, stirring frequently.

7. Meanwhile, Make the Crispy Leeks: While the risotto cooks, melt the butter in a medium skillet over medium heat. Add the leeks and cook, stirring occasionally, until they are browned and starting to crisp, 9 to 11 minutes. Season to taste with salt.

8. Stir the final ½ cup broth into the risotto as needed. Stir the remaining 4 tablespoons (56g) butter and the Parmesan into the risotto until fully combined. To serve, spoon the risotto onto plates (if the risotto firmed up too much while the leeks cooked, add about ½ cup warm water and stir to loosen and make the mixture creamy again) and garnish each with the crispy leeks.