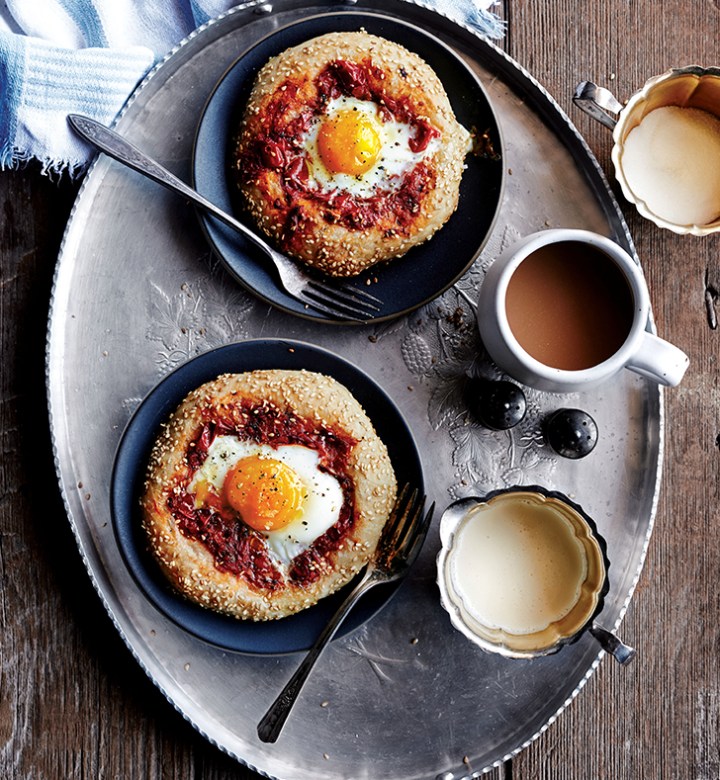 Traditional shakshuka involves cooking eggs in a spicy tomato sauce and serving it with crusty bread for dipping. This version, from Alexandra Stafford’s Bread Toast Crumbs, bakes the dish directly on a round of fluffy, sesame-studded bread for an ultra-satisfying, all-in-one breakfast.

If you find working with yeast intimidating, fret not: This simple dough requires no kneading and can even be prepared the night before. You’ll keep the proportions the same but use cold water in place of lukewarm, allowing it to rise at room temperature for 8 to 10 hours. In the morning, proceed with the recipe as directed. (The sauce can be made in advance, too, and stored in the fridge for up to a week.)

1. Make the Dough: In a medium bowl, whisk together the flour, salt and instant yeast. Add the water. Using a rubber spatula, mix until the liquid is absorbed and the ingredients form a sticky dough ball. Cover the bowl with a damp tea towel or plastic wrap and set aside in a warm spot to rise until the dough has nearly doubled in bulk, 1½ to 2 hours.

2. Make the Sauce: Meanwhile, in a medium skillet, heat the oil over medium heat. When it begins to shimmer, add the onion and sauté until soft and lightly golden, about 5 minutes. Add the garlic and cook until fragrant, about 1 minute. Season with the salt, pepper flakes, cumin and za’atar; stir to coat. Stir in the tomatoes, cover the pan and reduce the heat to low; simmer until the tomatoes begin to break down, about 5 minutes. Uncover the pan and cook until the juices have evaporated and the sauce has thickened, 5 to 10 minutes more. Stir in the cilantro. Taste and adjust the seasoning as needed. Remove the pan from the heat and set aside to cool.

3. Assemble the Shakshukas: Position the racks in the upper and lower thirds of your oven and preheat it to 350°F. Line two baking sheets with parchment paper. Spread 2 tablespoons flour over a clean work surface. Make three 1-teaspoon oil puddles on each sheet pan, spaced apart evenly. Sprinkle ½ teaspoon of sesame seeds into each puddle.

4. Using two forks, deflate the dough by releasing it from the sides of the bowl and pulling it toward the center. Rotate the bowl quarter turns as you deflate, turning the mass into a rough ball.

5. Using the two forks and working from the center out, separate the dough into two equal pieces. Use the forks to lift one half of the dough onto your prepared clean surface. Use a bench scraper or knife to cut the dough into three equal pieces. With floured hands, roll each portion into a ball, using the pinkie-edges of your hands to pinch the dough underneath each ball. Place each ball directly on top of an oil puddle; roll to coat. Repeat with the remaining dough on the second baking sheet. Let the dough sit undisturbed for 20 minutes.

6. With oiled hands and working from the center out, gently stretch each dough ball into a 6-to-7-inch round. As soon as the dough begins resisting, stop stretching it, let it rest for 5 minutes, then stretch again.

7. Spoon about 2 tablespoons of sauce over each round of dough, leaving a ½ inch border, pressing down lightly in the center to create a slight cup. Brush the edges of the dough with water and sprinkle with the remaining sesame seeds.