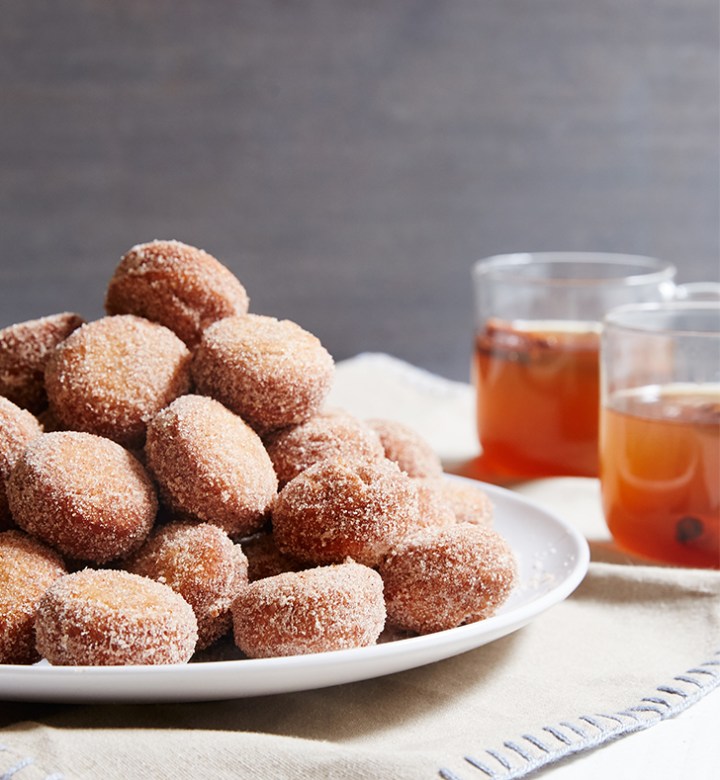 News flash: It's fall. So chances are you have some apple cider in your fridge. (And if not, chances are your local market has gallons aplenty.) And that's fantastic, because it's the key ingredient in our recipe for apple-cider doughnut holes. It adds a seasonal touch—and also happens to make the mini doughnuts perfectly moist.

1. Make the doughnuts: In a large pot, bring the cider to a boil over medium-high heat. Boil until it is reduced to 1 cup, about 8 to 10 minutes. Let cool to room temperature.

2. In the bowl of an electric mixer fitted with the paddle attachment, mix the flour with thebaking powder, cinnamon, nutmeg, salt and sugar on low speed to combine.

3. Add the cooled cider, butter, buttermilk and eggs, and mix until a smooth batter forms, 3 to 4 minutes.

4. Transfer the mixture to a parchment-lined baking sheet and wrap directly with plastic wrap. Refrigerate until firm, 30 minutes.

5. Heat about 3 inches of the oil in a medium pot over medium heat until a thermometer reads 350°F. Line a baking sheet with two or three layers of absorbent paper towels.

6. On a lightly floured surface, roll out the dough to ½ inch thick. Using a 1-inch circle cutter (or the rim of a small glass), cut circles out of the dough.

7. When the oil is hot, fry the doughnut holes in batches until golden brown on both sides, 6 to 8 minutes. Drain the finished doughnuts on the prepared baking sheet. Let cool for about 1 minute.

8. Make the coating: In a small bowl, mix the sugar with the cinnamon. While the doughnuts are still hot, toss them in the cinnamon sugar to coat. Serve immediately.