All the Details of Princess Beatrice's Engagement Ring

There's another royal wedding to look forward to, thanks to Princess Beatrice's, 31, and Edoardo Mapelli Mozzi's, 34, recent engagement. The two will wed in 2020, according to an announcement from Buckingham Palace.

The two lovebirds (who have dated for just over a year) got engaged in Italy earlier in the month. But they only recently shared pictures from the moment, as well as snaps of the gorgeous engagement ring that Mozzi himself designed. Here, all the details of BeaBea's new bling. 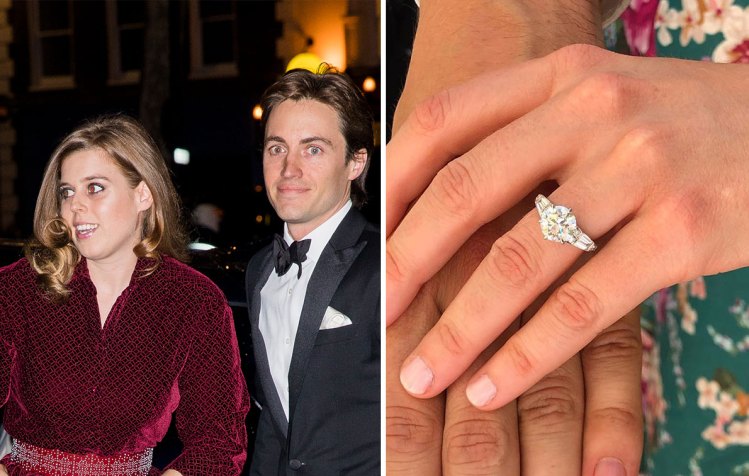 According to a spokesperson from Brilliant Earth, the center stone is a stunning 3.5 carat round brilliant diamond set on a platinum band flanked by tapered diamond baguettes on either side.

The ethically-sourced jewelry company estimates the ring to cost about $75,000-$100,000 (a hefty price tag for an engagement ring, but chump change for Mapelli Mozzi, who is a millionaire property and real estate tycoon and son of an Italian Count).

In the third photo in the Instagram slideshow above (posted by Beatrice's younger sister Princess Eugenie, who took the photos), you can clearly see the ring.

Largest privately owned U.S. jewelry company Shane Co.'s VP of Merchandise Alicia Davis also said there are two smaller round diamonds on either side of the main center stone and next to the tapered diamond baguettes, which you can see if you squint at the image above. That makes five diamonds in total, NBD.

According to Beatrice's dad, Prince Andrew, Mapelli Mozzi designed the ring himself.

The ring was "designed by Edo in collaboration with the British jewellery designer Shaun Leane," the Duke of York wrote in a caption on Instagram.

“I worked with Edo closely for the past four to five months: He wanted the fusion of two elements in one ring, his love of Art Deco and Princess Beatrice’s love of Victorian style, so it’s a mix of both aesthetics,” Leane said in an interview with WWD. “There are also other elements in the ring that reflect the unity of the two of them.”

British jewelry designer Leane posted photos of Beatrice's magnificent ring to Instagram, and confirmed the design influences in the caption.

"Bespoke design for Princess Beatrice-The platinum and diamond engagement ring is a fusion of Victorian and Art Deco designs and is accompanied by two additional matching bands in the distinctive Shaun Leane aesthetic."

Does that mean they already have their wedding rings, too? These lovebirds move fast, guys.

The wedding will take place in 2020, and Prince Andrew and Sarah "Fergie" Ferguson said they are "thrilled that Beatrice and Edoardo have got engaged, having watched their relationship develop with pride. We are the lucky parents of a wonderful daughter who has found her love and companion in a completely devoted friend and loyal young man."

A big beautiful rock fit for a princess? Sounds like a (royal) fairytale.