Kelly Ripa and Mark Consuelos have officially reunited back in New York. However, according to Ripa, her hubby is a “changed man” because he just broke his own bedroom rule. Allow us to explain.

On Monday, the Live with Kelly and Ryan star shared a video on her personal Instagram account featuring the 50-year-old Riverdale star laying in their shared bed at their home in NYC. “I have broken @instasuelos,” she wrote alongside the clip, “Notice Lena in bed.”

Yup, it sounds like Consuelos has a strict no dogs in bed policy (or should we say he used to). But it didn’t stop there. The All My Children alum shared a second vid which featured not one, but two dogs—Lena and Chewie—cuddling with Consuelos in bed. “@instasuelos a broken man,” she wrote. “2 dogs in bed.” 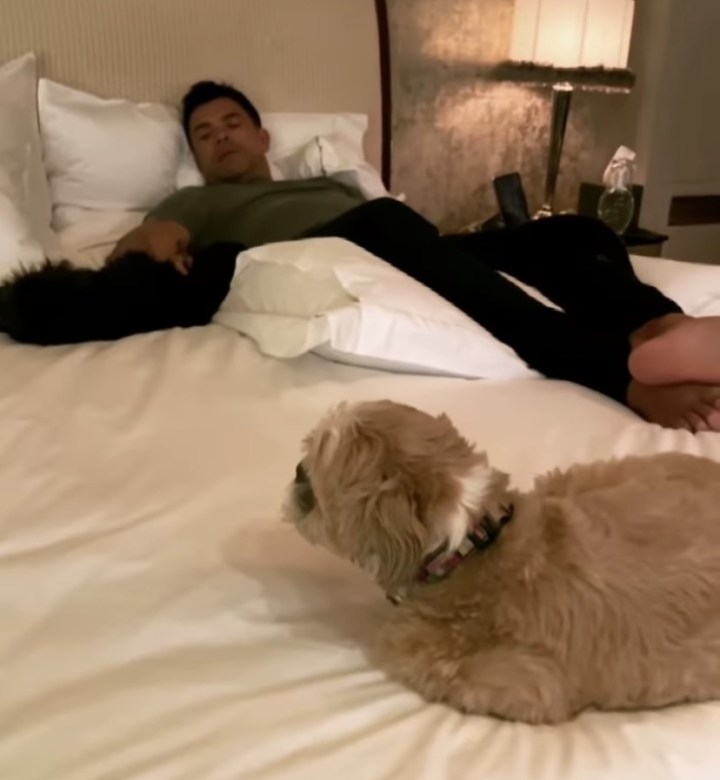 While Chewie has been in the family for a while, Ripa revealed in March that the family decided to adopt Lena, a Maltese/Shih Tzu that first appeared on the talk show as part of their Happy Pets segment. Ripa told Ryan Seacrest on an episode of Live, “The Consueloses have made a decision to adopt Lena."

She also stated that her biggest fear was Lena not getting along with her other dog. Luckily, the two dogs instantly hit it off and when Ripa checked to see how Lena was doing in her crate, Chewie was “outside the crate, sitting next to her with their noses together.” And even though the pups have hit a few bumps in the road along the way, these two look very happy to have their dad home.

Hey, sometimes rules are meant to be broken.

news
by Lex Goodman
The 15 Most Shocking and Memorable Grammys Moments of All Time
news
by Karelle Mckay
Reese Witherspoon Radiates in Vibrant ‘Netflix Red’ Dress for ‘Your Place or Mine’ Promo
news
by Karelle Mckay
This Is Not a Drill: The ‘A Simple Favor’ Sequel Is Expected to Start Filming Very Soon
news
by Greta Heggeness
Nick Jonas & Priyanka Chopra’s Daughter, Malti, Makes Her Public Debut in a Tweed Outfit
news
by Greta Heggeness
Kate Middleton Just Proved This Royal Rule No Longer Applies (at Least to Her)
news
by Karelle Mckay
Kelly Ripa & Mark Consuelos Warn Daughter Lola About Entering Their Room Without Knocking: ‘It’s Freaky Week’