Kacey Musgraves is getting in the holiday spirit and she has the sparkly suit to prove it.

Musgraves donned a silver-green metallic iridescent two-piece number from Christian Siriano’s spring 2020 collection for her visit to the show, during which she chatted with Fallon and performed her brand-new holiday song, “Glittery.” 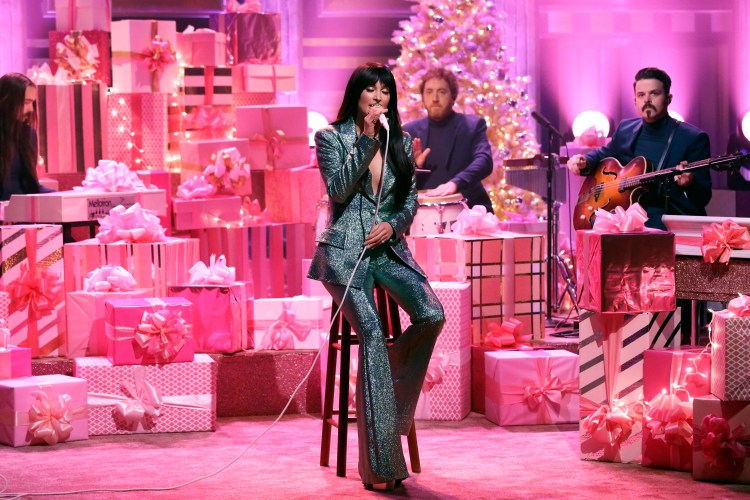 The singer really let her suit stand out and skipped a shirt for the occasion. In addition to a low neck, the ensemble featured wide bellbottom pants, which Musgraves complimented with massive silver platform heels. Under the stage lights, she almost looked Christmas tree-esque, which was fitting given the fact that she was trying to spread holiday cheer with her new tune. Musgraves completed the look with iridescent makeup and debuted a fresh set of curtain bangs. All in all, it was a fabulous look that, thanks to the sparkles and figure-flattering cut and shape, totally reminded us of Parton.

Coincidentally, Parton herself stopped by the show last night, too, and told Fallon a joke about that one time an old man not only forced her to buy his dinner but accidentally caused her to grow “two big lumps” (aka her boobs).  She also revealed that she recently saw Jolene (yeah, that one) and she’s “not that hot anymore.” Good golly, Dolly.

Between Musgraves’s suit and “Glittery” new song and Parton’s rib-ticklers, it was quite the episode of The Tonight Show.

We’ll be using all of the above as inspo for our company holiday party vibe.