Get ready for more than a few unexpected twists in three, two, one… 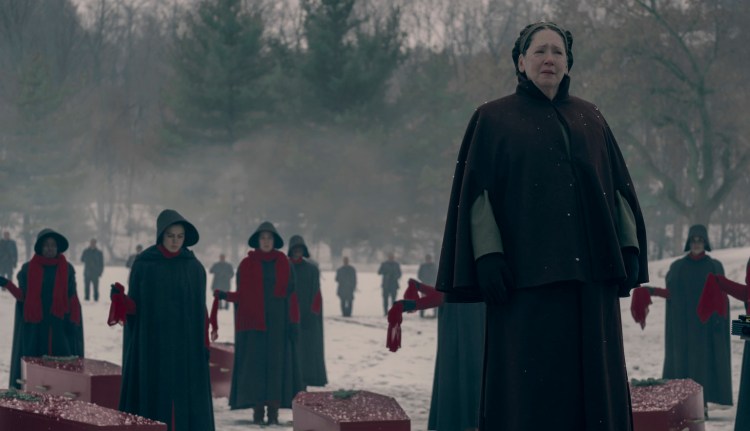 There’s A New Sheriff In Town

Episode seven opens with Aunt Lydia (Ann Dowd) presiding over a mass handmaid funeral. Offred (Elisabeth Moss) and her fellow handmaids are also there, wearing black coats and mourning their fallen friends. “I wish I could give you a world without violence, without pain. That’s all I’ve ever wanted,” Aunt Lydia tearfully says. It’s a very somber scene.

After the service, the handmaids pile into a van and are driven back to their respective homes. They discuss the information they’ve gathered about Ofglen’s, aka Lillie Fuller’s (Tattiawna Jones), bombing: 26 commanders and 31 handmaids dead. As they drive through the streets of Gilead, they can’t help but notice the bodies hanging from awnings and trees like they’re macabre Christmas lights.

We cut to the hospital, where Commander Waterford (Joseph Fiennes) lies badly burned and drifting in and out of consciousness. Serena (Yvonne Strahovski) is by his side. Nick (Max Minghella) arrives and offers to drive her home, but she’d prefer to stand watch over her ailing husband.

Meanwhile, in the Colonies, the miserable unwomen trudge through extreme wind. Suddenly a fleet of black SUVs pull up and Guardians bearing handy-dandy cattle prods force specific gals into the cars—including Emily (Alexis Bledel) and Janine (Madeline Brewer). TBD on whether this is really good or really bad. 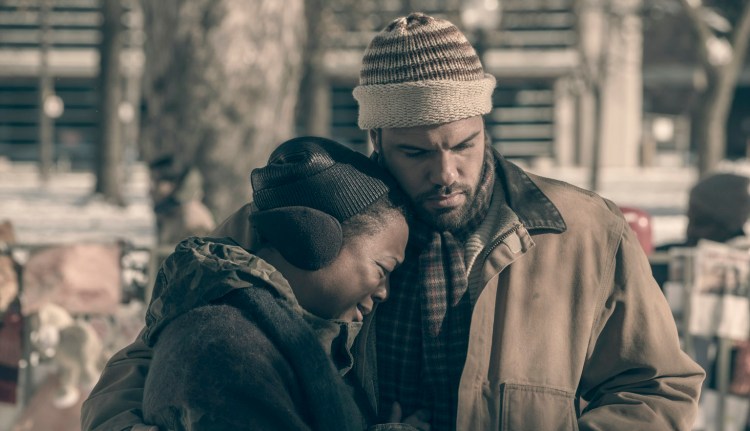 A Devastating Walk Down Memory Lane

Up in Canada, a government official announces that a terrorist attack has occurred in Gilead. Moira (Samira Wiley) asks if any handmaids were harmed, and although she’s grief-stricken to hear that the answer is yes, she’s even more concerned that Luke (O.T. Fagbenle) doesn’t seem to care. She asks why he’s so apathetic about his wife’s safety, and he quips back, “She’s alive. She’s not OK.” Touché, dude.

Moira begs the official for help and says she’s looking for her fiancee, Odette. (Um, we haven’t heard that name since the first episode.) The woman takes pity on her and escorts her to the record room where there’s a disturbing amount of filing cabinets filled with lists of dead people.

She searches through the archives past nightfall, and Luke brings her some tikka masala. He tries to convince her not to put herself through this trauma, but she says she wants to know if Odette died alone. She muses that it might be worse if she can’t find her name on the list, and Luke can definitely relate.

Though a series of flashbacks, Moira remembers her pre-Gilead life. Turns out, long before she was a handmaid, she opted to become a surrogate and looked forward to paying off all her student debt with her “giant pile of money.” She attends her first ultrasound and is reluctant to take a photo of the embryo home for fear of getting attached. Guess who’s her ob-gyn? Odette.

In another scene, June accompanies Moira to an Odette-led Lamaze class and patiently endures a tongue-lashing about her “perfect marriage.” June sets the record straight and says that Luke is merely an “infant” who doesn’t know how to fill the dishwasher. Her marriage is by no means “perfect.” Later, Moira gives birth to a boy, Gavin. After an emotional beat, she hands him over to Odette, who takes him to his new family. June senses her pain and tries to lighten the mood with a joke about childbirth and the joys of incontinence.

Time passes and Moira runs into Odette in a store. They strike up a conversation about recuperating vaginas and Malbec, and there’s chemistry…which makes it even more heartbreaking because back in the present, Moira learns Odette is dead. Cue all the ugly crying.

The next day, Canadian officials share the names of the handmaids who have been killed in the bombing. After the press briefing, Moira visits a memorial and places a photo of her and Odette under a tree. They looked like the epitome of a happy couple. Luke comes up behind her and they mourn the loss of the people they loved most. 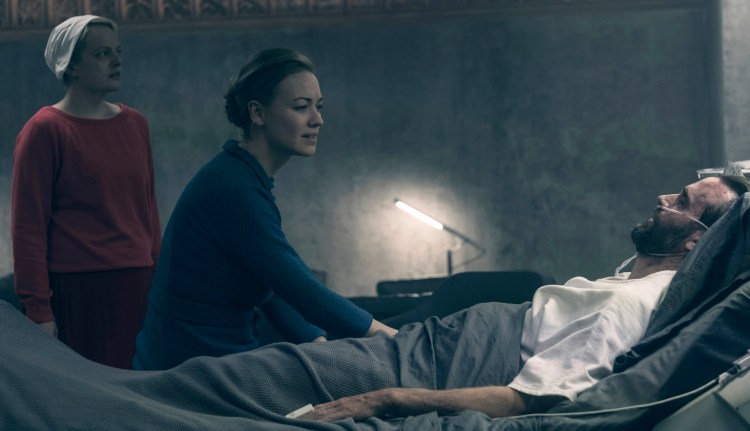 Two Visitors: One Welcome, One Not

After the service, June is packing up her mourning outfit in her room when Rita (Amanda Brugel) comes in and says there’s someone here to visit her. It’s creepy Commander Cushing. He asks Rita to leave the room, congratulates Offred on her pregnancy and dives into some questions about her shopping partner Ofglen and the attack she carried out. She explains that they didn’t know each other well, but that she “always seemed quite pious.” Offred tries to excuse herself but Commander Cushing tries a more direct technique and confronts her about trying to escape Gilead. Guess he knows she wasn’t kidnapped. She maintains that she was kidnapped, and he replies, “Offred, you can trust me.” He ventures to suggest that Commander Waterford helped her escape, then goes on to say, “Our nation is under siege. We do not have the luxury of fairy tales.” Nonetheless, Offred sticks to her story.

Before Commander Cushing leaves, he feels her pregnant belly, grabs her chin and sneers, “If your house has been infected with terrorists, I need to know.” Suddenly, there’s a disturbance outside. He leaves and Offred peers out the window and sees the Websters’ Martha shot and killed by Guardians.

Later, Offred visits the Waterfords in the hospital and Serena is grateful to see her. She whispers, “Fred, our baby is safe. It’s here,” and places his hand on Offred’s stomach. She’s excused shortly after and passes Nick as she leaves. They find privacy in an empty hallway and catch up. A wave of emotion hits her and she tells him about the murdered Martha and about how hellish Gilead has become since the attack. They embrace, and through her tears, she reveals that Commander Cushing is insisting she tell him who helped her escape. Nick promises to keep her safe, but when she asks about how he’s protecting himself, he passionately kisses her instead. She succumbs to her feelings, but soon pulls away and leaves.

Later, Offred is alone in the house and Serena returns. It’s late and Serena tells her to go to bed, reasoning that “the baby needs rest.” Offred replies that the baby actually needs Twinkies but that they’re improvising. They chat about Commander Waterford, and Serena admits that he needs to get back in the office before Commander Cushing causes an apocalypse.

She opens up and reveals that they used to vacation with Commander Cushing pre-Gilead. They even went to Antigua together, but she sure as hell doesn’t like him. Offred sees her chance and tells Serena that he came to speak to her about her “kidnapping” and suspects it was more of a failed escape. “You need to answer his questions very carefully. Make sure that he understands the truth,” Serena coaches her.

Offred goes on to reason that if Commander Cushing executed Ofglen’s entire household, then he’ll surely kill all of them—even the baby—if he learns about her connection to Mayday. Serena scoffs and says Commander Waterford would never allow that, but Offred reminds her that he’s out of commission. Time to step up, Serena.

Nick arrives home later and finds Serena at his kitchen table. She sent Eden (Sydney Sweeney) and Rita over to the Websters’ to check on the family in the wake of their Martha’s murder. Serena asks him point-blank if he ever helped Commander Waterford submit warrants to the Consular of Divine Law (i.e., the equivalent of bills submitted to Congress). He says that he has but that they need the Commander’s signature. She insinuates that she’ll forge the Commander’s signature if Nick will help her. 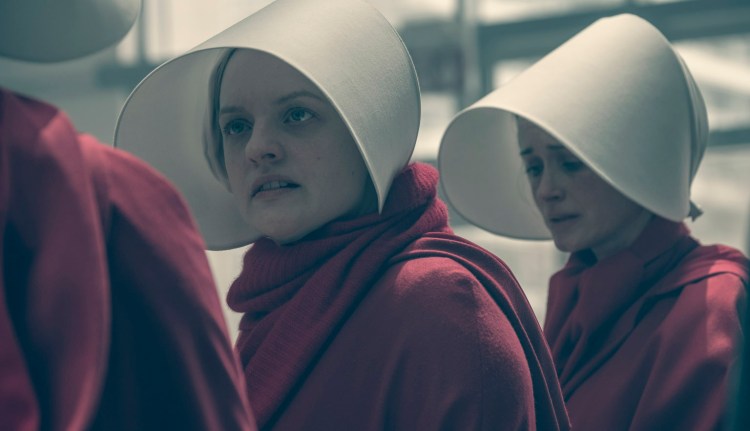 Later, Commander Cushing arrives at the Waterford home and learns that he’s been stripped of his command and labeled a terrorist by order of Commander Waterford…even though he’s still bedridden and unconscious. Serena, Nick and Offred look on as power-hungry Commander Cushing is arrested.

Offred celebrates Commander Cushing’s incarceration with a victory lap at the grocery store with Eden. The child bride steps away and, suddenly, Janine sneaks up on Offred and says that she’s been brought back to Gilead because so many handmaids died in the bombing. But wait, that’s not all. Emily is back in her red cloak, too. Their reunion is emotional and Offred finally tells her something she was never able to before: her real name. Emboldened, Offred pulls another handmaid aside and introduces herself as June. The handmaid is stunned but reciprocates and says her name is Brianna. Brianna then continues over to Alma (Nina Kiri), and introduces herself. A ripple effect continues through the store, and handmaids whisper their names to one another. Praise be! We needed some positivity, but judging from the look on Eden’s face, it might not last long.

That night, Serena calls Offred into the Commander’s office to talk, but it’s not to reprimand her for the whole grocery store thing. “Commander Cushing turned our streets into a war zone. These are drafts of new security orders,” she says. Turns out Serena has been writing warrants under her husband’s name to get Gilead back on track. She asks Offred, a former book editor, to read over the new orders for her. Offred is shocked (remember: Women can’t read or write in Gilead) but is down for the task. She grabs a red pen and gets to editing.

Is it just us or are Serena and Offred suddenly becoming oppression-fighting besties? Hey, we’re not mad at it.