How to Make a Freddo Cappuccino, the Latest Drink to Take Over TikTok

Whipped coffee (aka dalgona coffee) took social media by storm at the start of the pandemic. And it’s no secret why: What’s not to love about coffee, sugar and milk that’s whipped to frothy perfection? Whipped strawberry milk and whipped lemonade followed soon after, and now, there’s yet another coffee-based bev to whip up at home: the freddo cappuccino. Read on for details on the latest trending java sipper, plus an easy recipe for making it at home. 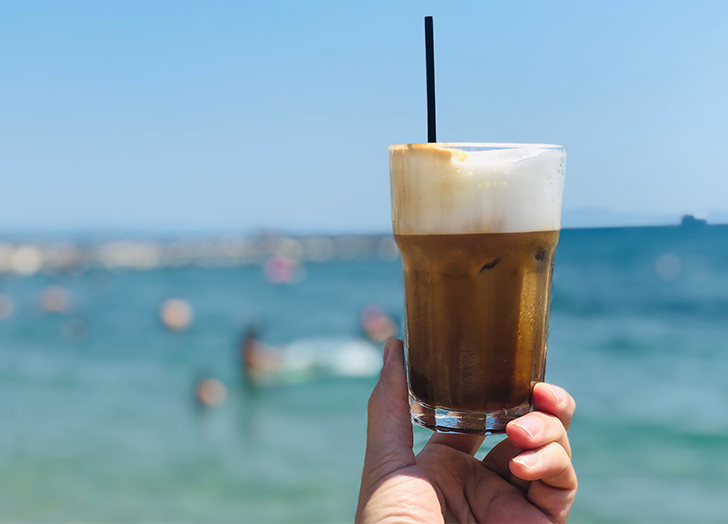 What Is A Freddo Cappuccino?

The freddo is a Greek beverage that’s been sipped for decades. It’s an iced coffee drink made from fresh espresso and frothed milk, and it combines the refreshment of a cold coffee with the robust flavor of a double espresso. It’s no surprise that this drink is served cold by default, since Greece is pretty warm and sunny year-round.

Espresso first hit the Greek coffee scene in the ’90s, just when the frappe was becoming popular stateside (though it had been commonly found in Greece since the late ’50s). The freddo is essentially the same drink as the frappe, except it’s made with espresso instead of instant coffee. Both drinks are also prepared in a similar fashion, but a frappe can also be served blended. You may not see a freddo espresso or freddo cappuccino at an American Starbucks, but there’s no doubt that the chain’s increasingly popular cold foam-topped beverages were inspired by the Euro drink.

The freddo cappuccino is not to be confused with freddo espresso. Both iced drinks have many variations, but a popular version of the freddo espresso calls for blending a hot double espresso with ice and sugar in a drink mixer, which creates a layer of foam on top of the drink. The freddo cappuccino is alternatively finished with a layer of cold, foamy milk. There’s also such a thing as a freddo flat white, which is served with un-aerated milk on the bottom and a layer of aerated espresso on top. (It’s also served cold, but not over ice.)

The freddo cappuccino has been making the rounds on both Instagram and TikTok thanks to Food52 resident and content creator Carolina Gelen’s viral recipe, which calls for instant espresso or coffee instead of freshly pulled shots (meaning anyone can make this bev, even without an espresso machine or grinder).

How To Make A Freddo Cappuccino

Using quality espresso that you enjoy is key to making a delicious freddo cappuccino. Traditionally, the recipe starts with freshly pulled espresso shots on ice, but some viral renditions of the drink call for instant espresso powder instead, which requires hot water. You can add sugar to the espresso after it’s prepared, but purists will tell you that leaving the drink unsweetened will better allow the coffee’s aroma and flavor to shine. Either way, try to use a full-bodied espresso with low or medium acidity.

Also, creating the beverage in a drink mixer (or, like Gelen, in a cocktail shaker) is not only less fussy than using a blender, but it also turns the coffee cold in a flash without crushing the ice, and consequently diluting the espresso. Skim milk is often the preferred dairy of choice since it creates a more enduring foam, but you can use cream, whole milk or even non-dairy milk if you’d prefer.

Finally, resist the urge to stir the milk and espresso together once you top the glass. Drinking a freddo cappuccino with distinct layers allows the milk to incorporate itself into the drink at its own pace, so the texture and flavor of the drink will change as you sip it. (Plus, it looks *so* much prettier layered than mixed.)

Step 1: Add two hot shots of espresso to a cup. (If you’re using instant espresso powder or instant coffee, add hot water to the powder and stir until dissolved. Add the sugar as well, if you want it sweetened.) Fill a cocktail shaker or jar with ice. Add the espresso to the cocktail shaker and lightly shake to chill the espresso. Pour the chilled espresso and ice into a drinking glass and reserve.

Step 2: Add three parts heavy cream and one part milk to a lidded jar or cocktail shaker. Shake until the milk is frothed enough to hold soft peaks.

Step 3: Pour the frothed milk over the iced espresso and enjoy.

15 Iced Coffee Recipes That Are Well Worth Waking Up For