Blue Apron Sells a Complete Thanksgiving Dinner for $140, and It Rivals Your Grandma’s Best Recipes

When it comes to cooking Thanksgiving dinner, it isn’t the prep work, the planning or the baking that gets me: It’s the shopping. The endless searching for every ingredient on our list, the checkout lines, the leftover seasonings cramming my already-jammed shelves. So, when we saw Blue Apron sells a complete Thanksgiving dinner—dessert included—that feeds six to eight people, delivered to your door, we had to try it.

Could it live up to Dad’s obsessive turkey-roasting techniques, honed over watching Food Network nearly 24 hours a day over the past 20 years? Would the recipes be so labor-intensive we’d regret ever opening the box? Or worse, so bland that we’d wish we’d ordered takeout instead?

Thankfully, we were pleasantly surprised across the board. Here’s what stood out—and what we’d humbly request to change, in the Everyone’s a Critic Suggestion Box known as the internet.

As with our other meal kit tests, we focused on following the company’s instructions to a T. We considered the box as a whole (its delivery, packaging, the thoroughness of the menu), and had seven people test each dish and rate them on the following:

*Our taste score is an average of the scores from each dish in the kit. 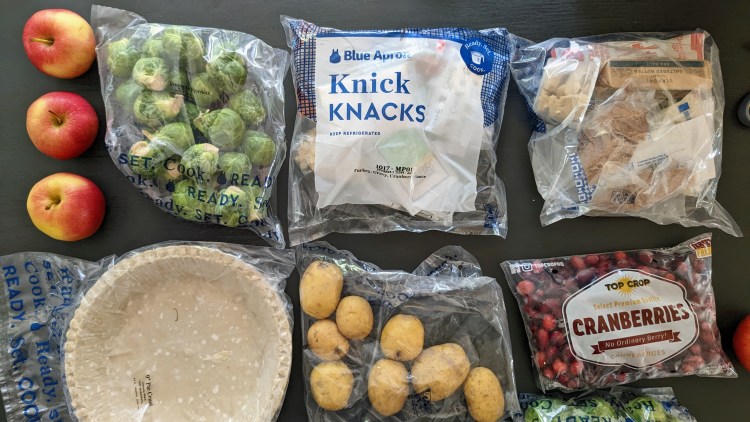 The entire meal arrived quickly, in a box roughly the size of a Barbie Dreamhouse. Everything was well chilled, without excess packaging, and I appreciated that the “knick knacks”—AKA small ingredients, like seasonings and sauces—were bagged together for each dish. The kit even included butter, something other meal kits require you to have on your own.

Another perk: The recipe cards came in a folder that included a full breakdown of steps you could make ahead, giving you a basic run of show so you know what to make and when. With this directive, we spent about two hours the night before baking the apple pie, cranberry sauce and mashed potatoes, and slicing up the Brussels sprouts. It made the day of much less frantic—still about two to three hours’ work, but not such a scramble that you couldn’t catch up with company. 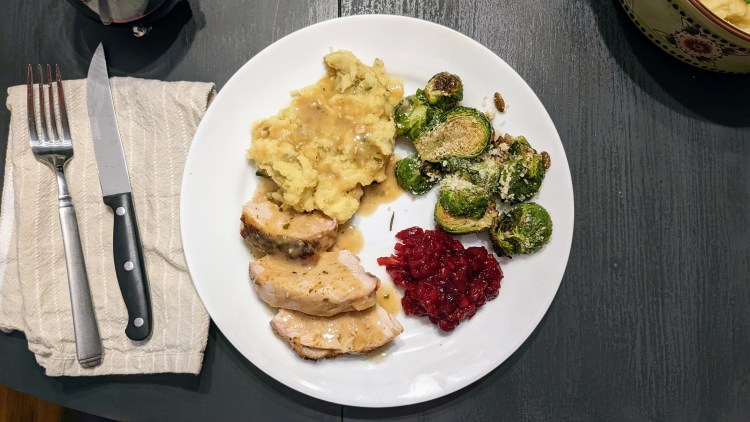 Dark meat fans may be disappointed to learn you're only roasting a turkey breast, but it results in a quick-cooking bird. Preparation is simple--you season it with salt and pepper the night before, and the day of, you whip up an easy compound butter with Blue Apron's signature Weeknight Hero Spice Blend, a combo of onion, garlic, parsley and paprika. Coat the bird, cook it for roughly an hour and 15 minutes (timing our meat thermometer confirmed), and you're good to go.

The turkey stayed juicy, thanks to tenting it in the last half hour of roasting, with a crisp skin that didn't burn. It wasn't revolutionary, but it was pretty foolproof and made for an excellent base for the incredibly flavorful sides. (Also, props to Blue Apron for including a QR code for a turkey-carving tutorial.)

Ok, wow. Garlic, herb butter and a little vinegar are the keys to a complex, savory yet slightly tangy gravy you'll want to pour over everything. Best of all, it takes just 5 minutes to whip up. 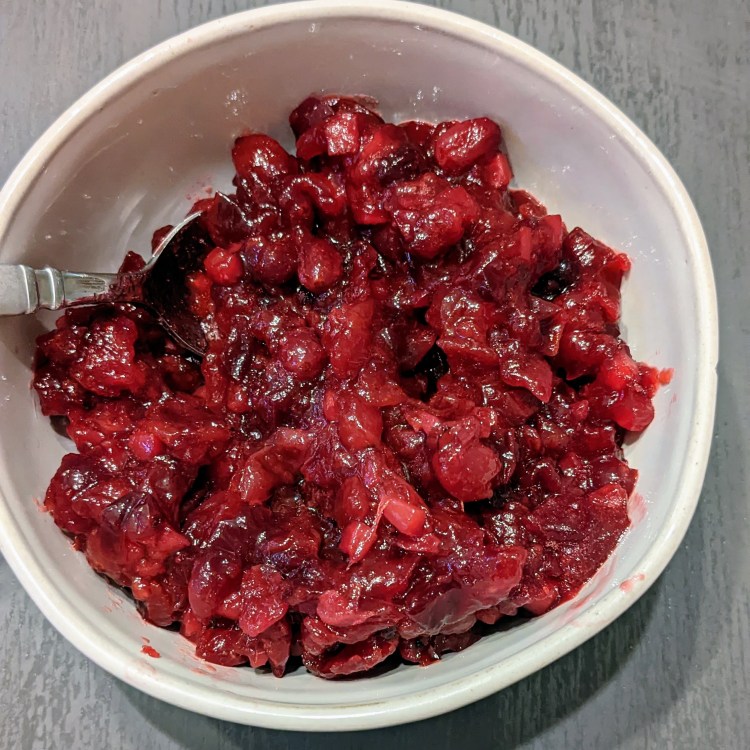 Back away from the jarred stuff. Watching the cranberries break down as they cook is oddly satisfying, but what made this side stand out is the addition of orange marmalade and candied ginger. It's sweet, it's tart, it's got a little zing to it; you won't even miss that can-shaped log of jelly on your table. 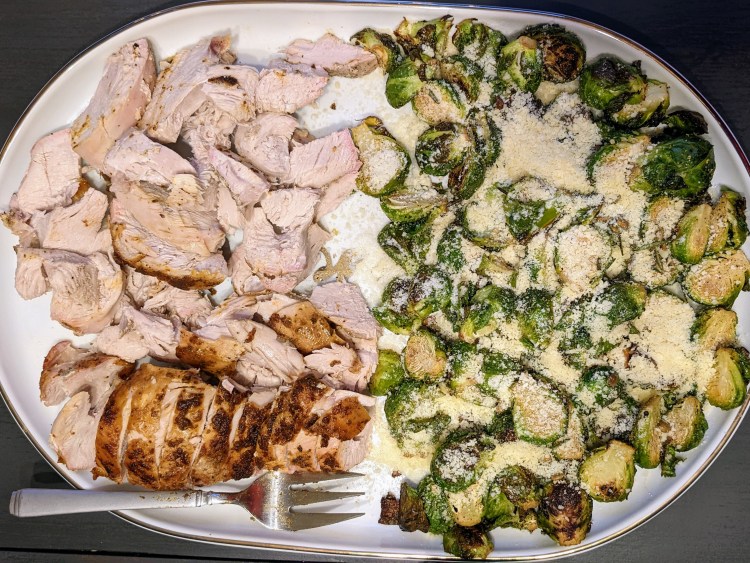 Roasted Brussels sprouts are a delight on their own, but when brightened with lemon and tossed with fried rosemary, crunchy pepitas and salty parmesan, they're next-level. Even those who swear they don't like sprouts will reach for seconds. I'd make this again all winter long, only I'd let the Brussels sprouts roast a bit longer to caramelize and crisp up a bit more. 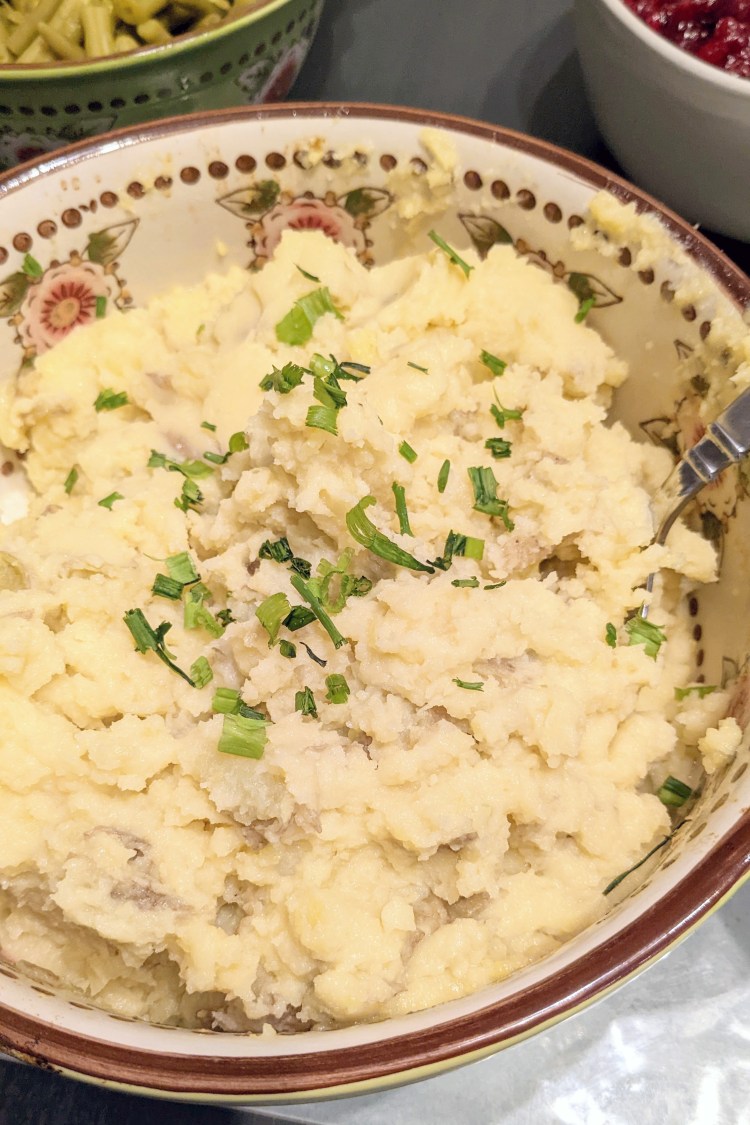 The sides are where Blue Apron really shines. The brand pulls out all the stops for its Cheddar Mashed Potatoes, and the extra effort (we're talking about 35 minutes total, all of which can be done the night before) is worth it. You're folding in brown butter! You're mashing in cheddar and cream! You're garnishing with chives and Romano! This dish isn't for the faint of heart, but it's so creamy and layered with cheesy flavor that it makes for the kind of side people talk about days later.

We had our reservations about reheating; Blue Apron's suggestion of whisking in milk and warming it on the stovetop worked like a charm. No lumps, no clumps, no loss of flavor. 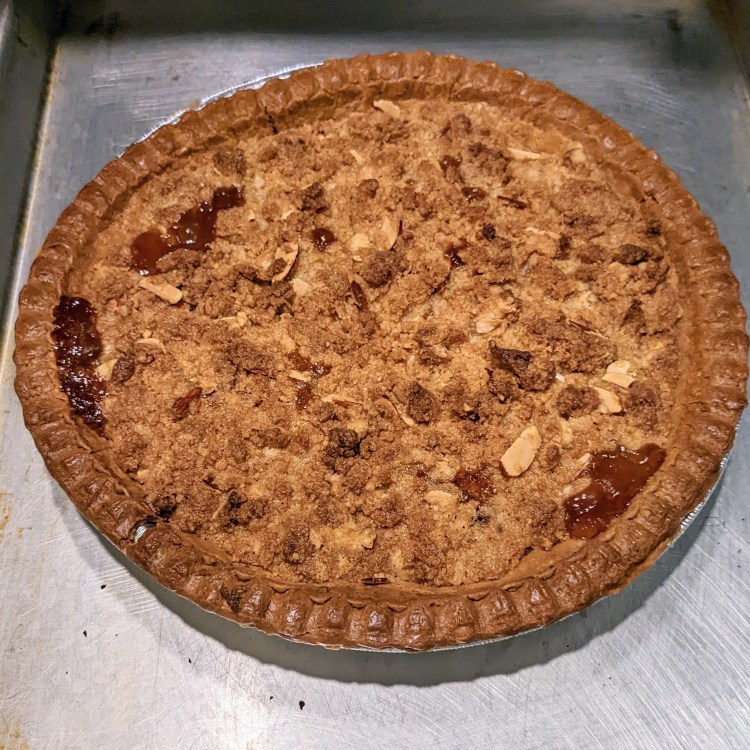 As much as we love homemade apple pie, we would've gladly swapped this dessert for another side (like stuffing), if given the chance. It's easy to prepare and results in a gloriously caramel-rich treat, but tasters remarked they wished it contained more fruit and had a flakier crust.

The portions were generous for feeding six adults and two kids; for eight grownups (or more), you may want to throw in an extra side—might we suggest stuffing? Our meal felt incomplete without it, especially considering that we could get a comparable-tasting pie from a local supermarket for less than $10.

However, the turkey, gravy and sides were so easy to prepare—and incredibly tasty—that we’d gladly recommend this meal to anyone cooking their first (or even fortieth) Thanksgiving dinner.

The PureWow100 is a scale our editors use to vet new products and services, so you know what’s worth the spend and what’s total hype. Learn more about our process here.