What Are the Benefits of Pickle Juice? We Asked a Nutritionist 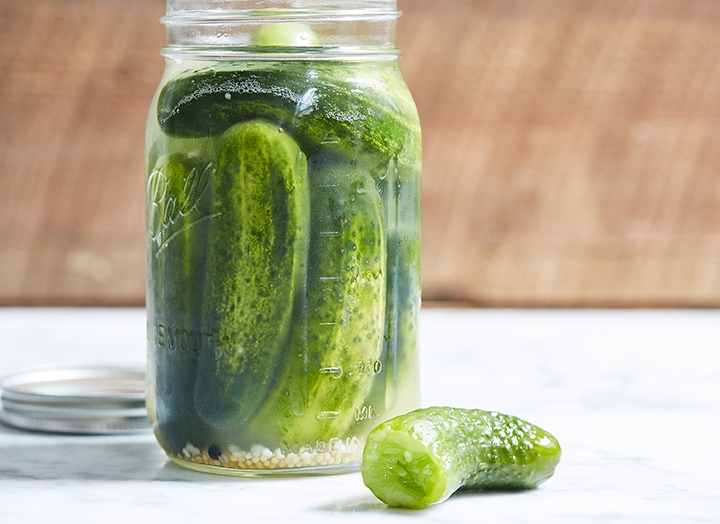 Not only are pickles crunchy, refreshing and downright delectable, they’re pretty healthy for you too. Pickle juice is no different, and odds are you’ve scrolled past a few gym rats on your Instagram feed who swear by its health perks. But is it just a baseless trend? We spoke to Dr. Felicia Stoler, DCN, a registered dietitian, nutritionist and exercise physiologist, about the benefits of pickle juice—and its limitations.

The Benefits of Pickle Juice

Just about all fermented vegetables can aid in gut health if they’re made in saltwater brine. That’s thanks to healthy bacteria, much like what’s found in other probiotic-rich, gut-healthy foods like pickled onions, yogurt and kimchi. Naturally-pickled and fermented foods have been said to suppress inflammatory responses to allergies, heart disease and cancer, plus aid in immune response.

But you’ve likely seen pickle juice being sipped as a means to hydrate (ya know, when you’re not at a bar). “People use pickle juice as a means of getting electrolytes. Think Gatorade without the sweet,” says Stoler. “It’s great for those individuals who get fatigued from sweet sports drinks.” That probably explains why you can buy canned pickle juice that’s ready to drink.

Here’s the catch: Only some pickles and pickle juice boast these potential perks. First of all, vinegar kills most of the healthy bacteria that benefits the gut, so brines containing it aren’t as good for you. Processed pickles typically contain vinegar and more sodium than homemade ones, plus they’re commonly treated with preservatives. Homemade pickles made in saltwater brine usually have more probiotics and less sodium, so if you’re pickle-obsessed, go the DIY route whenever possible. More on that later.

But even if you’re sucking down homemade pickle juice, it can still contain *hella* salt. “Pickles and cucumbers are a great low, almost zero-calorie snack. The issue is the sodium level,” says Stoler. “We know that high sodium intake contributes to hypertension, water retention and more.”

According to the American Heart Association, nine of every ten Americans consume too much sodium, more than 70 percent of it in the form of processed or restaurant foods. Excessive salt intake can lead to water retention, which can cause puffiness, bloating and weight gain. Long-term high sodium consumption puts you at risk for everything from headaches and osteoporosis to high blood pressure, stroke, kidney disease and heart failure. Limiting your sodium intake, as well as your consumption of saturated fat, trans fat, red meat and sugar, can work wonders for your heart, especially if you’re also getting your daily recommended fruits, vegetables, whole-grains and lean proteins in.

TLDR: Sure, pickle juice has some perks, but its negatives make regular consumption pretty fruitless and excessive consumption dangerous. Stoler says there’s no benefit to routine pickle or pickle juice consumption, namely because of high sodium levels. But a post-workout glug or a spear and a swig with lunch every so often won’t hurt—just do so sparingly if you have high blood pressure.

There are also plenty of solid alternatives that will replenish your electrolytes without all that bloat-inducing salt. Stoler recommends smartwater, which she says has electrolytes in a more manageable level without any briny flavor. P.S. If you find yourself craving the salty sipper (or pickles) all the time, it can mean your body is dehydrated. Sodium is a crucial electrolyte that boosts hydration, and a hankering for salty food can mean you’re lacking it.

How to Make Easy Homemade Pickles

Sure, you can pick a jar off the supermarket shelf and call it a day. If you do, we taste-tested the best dill pickles you can find at the grocery store ourselves and found five brands that blew 15 others out of the water. But it’s easier to make homemade pickles than you may think. Here’s how to make a quart of three-step pickles. (FYI, our recipe is basically foolproof.) You can swap cucumbers for red or pearl onions, jalapeños, radishes, beets, carrots, cabbage or even Brussels sprouts too. No matter how you tackle the recipe, feel free to leave the vinegar out completely if you plan on eating the pickles and drinking the brine for health reasons. It’ll kill the gut-friendly probiotics you’re seeking in the first place.

If you can’t wait 48 hours for your pickle fix, there’s always quick pickling. Just briefly add the cucumbers to the boiling brine to soften them a bit before transferring them to the jar and let them marinate there for as long as you can before enjoying.