Pamela Anderson Is the Surprise Fashion Icon of 2022

Britney Spears, Monica Lewinsky, Paris Hilton, Jessica Simpson—each of these women were torn apart by the media at the peak of their fame, labeled in unforgiving terms by the public and forced to live as the punchlines of crude jokes. Twenty years later, however, they’ve regained control of their narratives and have garnered apologies, or at least acknowledgment, for the sexist, patronizing and reductive criticism they faced at the time. Britney ended her conservatorship. Monica reframed her ordeal courtesy of new TV shows and documentaries. And Paris, well, she kept on Paris-ing, new husband in tow.

So it came as no surprise to me when Pamela Anderson joined their ranks as a once vilified female celebrity finally earning her due respect. Hulu recently released Pam & Tommy, a miniseries that recasts the duo’s infamous sex tape as a story about invasion of privacy and public trauma. Netflix is planning an upcoming documentary about her life (this one sanctioned by the actress). And Pam herself is getting juicier roles than she ever did in her heyday, recently starting an eight-week run as Roxie Hart in a Broadway production of Chicago—to pretty great reviews, I might add.

The bigger surprise is that Pam’s signature sense of style is also getting an updated, more dignified resurrection. Because, let’s be honest, in the ‘90s and early aughts, she wasn’t exactly what you would call haute couture.

“I hate to say it—I wish there was a better word for it—but at the time, Pamela Anderson’s style was pretty trashy,” remembers my mother, who tried to shield my sisters and me from her charms, but to no avail. “She wasn’t really anyone’s idea of fashionable or stylish.” While her most iconic look will always be the red one-piece she sported for six seasons on Baywatch, Pamela Anderson’s off-duty style was much louder, and no more modest. Cropped, torn baby tees with low-rise jeans and minidresses that barely covered her butt were her bread and butter. As were her perfectly undone updos and brown-lined pout. And, of course, we can’t forget her penchant for wild hats. It was not what you would call high fashion or chic. In fact, words like “trashy” or “sleazy” would have been more likely descriptors for her rhinestone-emblazoned tanks and boobalicious frocks. (Though, to be honest, most headlines at the time focused entirely on Pam’s body, and less on what she put on it.) 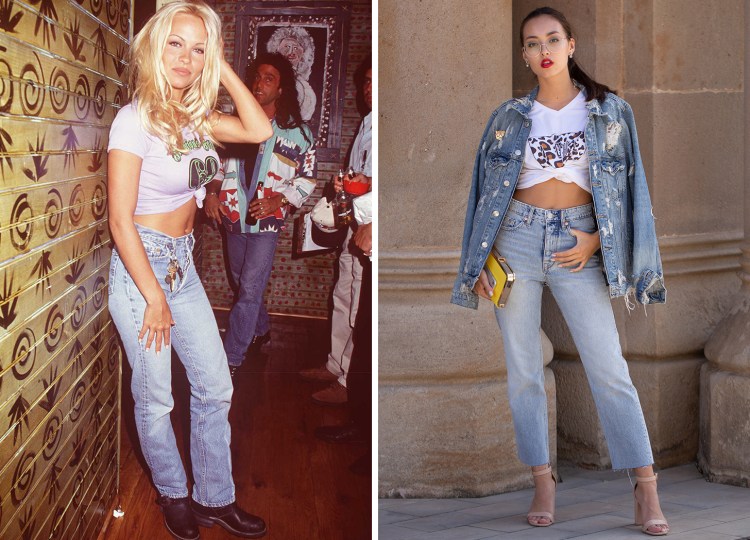 And yet, these days, the Pam look is definitively back in vogue. In recent months, Cardi B and Kim Kardashian have both been spotted rocking Anderson’s signature curly updo. Brown lip liner and thin eyebrows are making a shocking comeback both on and off the runways. Spend 15 minutes in the Lower East Side, and you’ll spot low-rise jeans and '80s and ‘90s graphic tees (specifically those featuring beer brands and heavy metal bands), cropped to barely below under-boob territory. And cleavage-forward lace-up and corset tops might primarily be attributed to the Bridegrton effect, but there’s no denying that most trendsetters are wearing them in Pam-like style, with distressed jeans or cut-off shorts, rather than with empire-waist dresses and opera gloves. 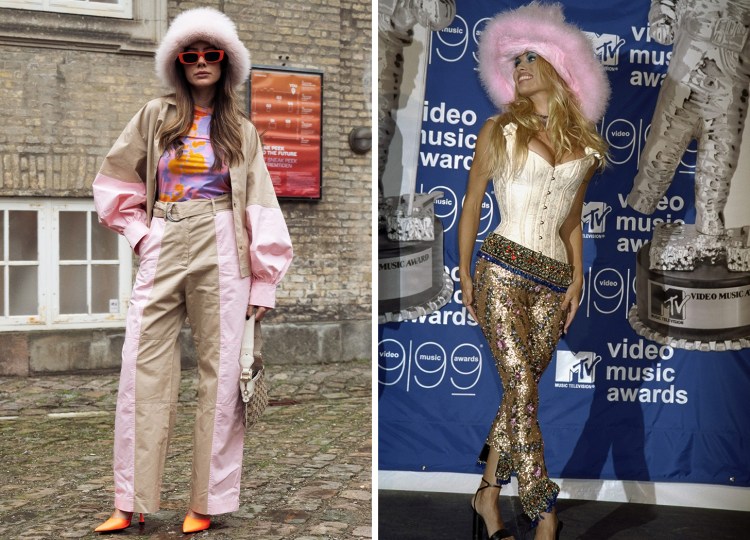 Even her fuzzy bucket hat from the 1999 VMAs would now be considered a fun throwback piece, albeit on a smaller scale, to be worn with a babydoll dress or chic matching set. Cut-out dresses, open crochet knits, little slip dresses, foxy bodysuits—Pam wore them all, and now we are too.

It makes sense, of course, that the resurgence is most popular among Gen Z and younger millennials, who never experienced her in her prime. They weren’t old enough to have the message that “Pam Anderson = bad role model” drilled into them, and moreover, they grew up in a world where Kim Kardashian had solidified herself as a fashion icon and defied the media’s attempts to vilify her, despite a rocky start replete with sex tape. 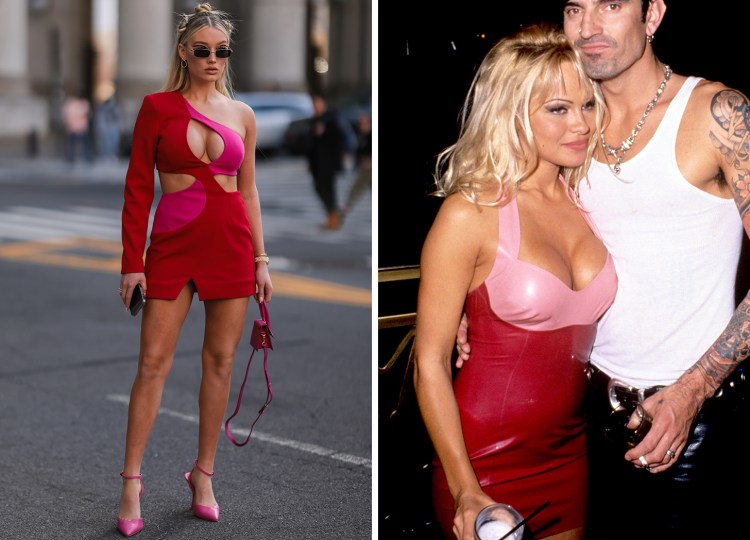 I was just seven years old when Anderson ended her turn as C.J. Parker on Baywatch and I have no idea when I first learned who she was. But by elementary school, even I knew she was dangerously hot. PureWow’s Executive Editor, Dara Katz, has similar memories of how this sexiness seeped into her young consciousness. “I don’t think I had formed my own opinion of her because I was so young, but what others thought of her definitely left an impression on me. I remember boys in my 4th grade class talking about how hot she was. I remember Howard Stern being obsessed with her (why was I, a 4th grader, listening to Howard Stern??). I don’t know if I understood she had a sex tape, but her fame was so tethered to her sexuality that even as a kid I knew Pam Anderson = Sex.” Bottom line: She was someone who should serve as an example of what not to do—and how not to dress. That’s a message that’s hard to shake, even as an adult.

Watching Pam & Tommy, I found myself outraged, as did many people, on Pam Anderson’s behalf—any woman should be able to do with her body whatever she damn well pleases. What’s been harder for folks to agree on is whether dressing in sexy (or even trashy) clothing is empowering or not. Am I reclaiming my body and image by wearing a latex mini dress that leaves little to the imagination? Or is it simply another tool for over-sexualizing women and playing to male fantasy? Should I be taken less seriously if wear cropped, tight tees with beer logos or purposely over-line my lips? The obvious answer is “no, of course not” but that doesn’t mean it won’t happen anyway. 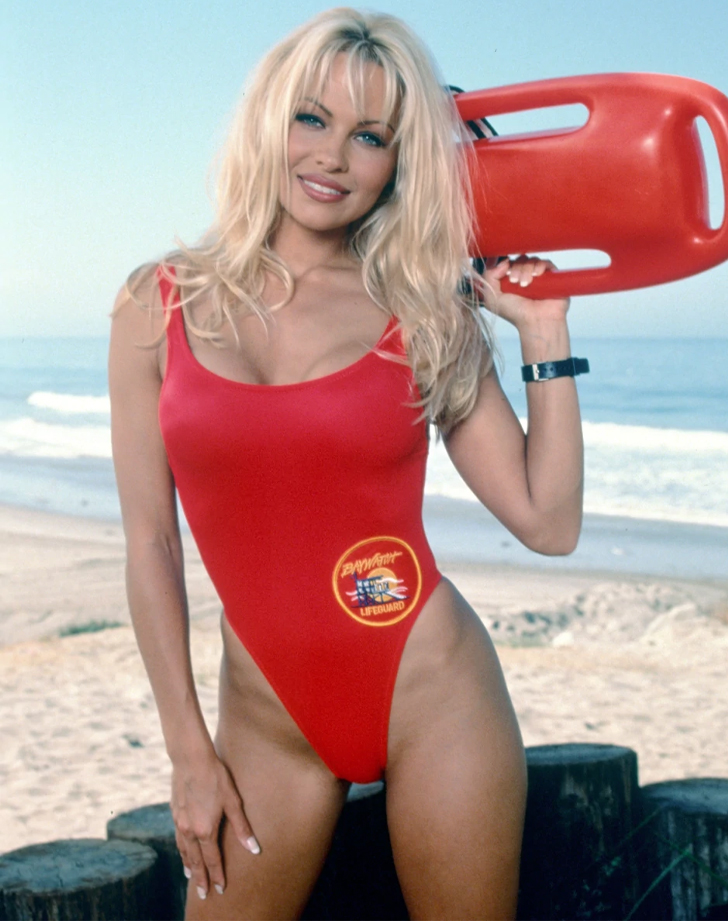 But maybe I’m losing sight of the point. Maybe more important than determining if Pamela Anderson’s fashion was empowering is determining if it was fun. Is it fun to wear a minidress that flirts on the edge of a wardrobe malfunction? Is it playful to pair an über-sexy push-up bustier with loose, distressed denim? Is it a sly screw you to the establishment to wear a crazy hat or bag or pair of pants that no one else would expect? Yes, yes and yes. Because ultimately, the joy in a nostalgic fashion resurrection comes not from exactly replicating an era, but in taking the best parts (say, ’80s day glow) and scrapping the bad ones (shoulder pads and bright blue eyeshadow). And with an icon like Pam, there’s actually quite a lot to love.

fashion
by Rachel Bowie
The 53 Best Gifts for Mom from $10 to $1,500 (Even Though She’s Totally Priceless)
fashion
by Stephanie Meraz
6 Winter Date Night Outfits That Are So Easy to Copy
fashion
Sponsored
SOREL Boots Are Taking TikTok by Storm—Here’s Where to Snag ’Em
fashion
by Destinee Scott
Reformation Canada Goose Outerwear Just Dropped—Here's Why It's Worth Every Penny
fashion
by Abby Hepworth
27 Ugly Christmas Sweater Ideas to Try This Holiday Season (Including Some DIYs, If You’re Feeling Crafty)
fashion
by Stephanie Meraz
 10 Stylish Winter Skirts to Give Your Overworked Jeans a Break (Plus How to Wear Them)