It’s a winter wonderland outside and your dog has a hankering for an icy cold treat. So, why do dogs eat snow? And, perhaps more importantly, is this quirky habit OK for your canine’s health? We spoke with Dr. Kurt Venator, chief veterinary officer at Purina, for the full scoop. As it turns out, there are a few different reasons why your pooch could be chowing down on snowflakes, including thirst and simple curiosity. But as for whether or not it’s dangerous? Well, that depends. Find out more below. 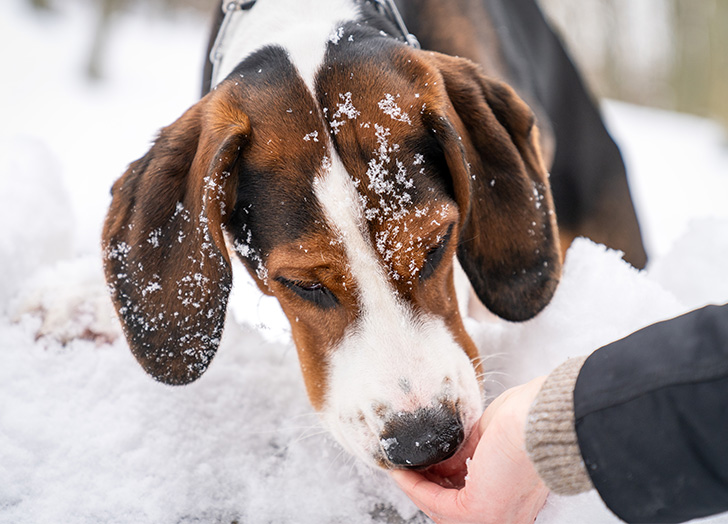 Why Do Dogs Eat Snow?

So your pup just had a grand ol’ time at the dog park (winter be damned!) and stops to chow down on some snow en route to the home front. Per Dr. Kurt, sometimes the best explanation for said phenomenon is the most obvious one: “It’s possible that your dog is just thirsty or if they have been exercising outside, possibly dehydrated and looking for a source of water.” Unless your pup is wearing a CamelPak this makes a lot of sense, no?

Hold up: Before you get too precious and start worrying that your pup is severely dehydrated from that walk around the block, you might also consider that eating snow is simply what your dog was born to do. Dr. Kurt tells us that some dogs have “an evolutionary need to rehydrate” while others simply indulge because they’re curious, or because they’re attracted to the texture, cold temperature and taste of the snow.

Although eating snow is generally harmless (more on that later), a pup who’s regularly going to town on the stuff and cannot be stopped might need to see the veterinarian for a health check-up. As with excessive thirst, excessive eating of snow can, in some cases, indicate dehydration caused by an underlying health condition like diabetes or kidney disease, cautions Dr. Kurt.

Is it bad for dogs to eat snow?

According to the expert, eating snow is not a problem in and of itself. Indeed, “the prevailing scientific opinion is it’s OK for your dog to eat clean, fresh snow in small amounts,” says Dr. Kurt. However, that doesn’t make it an entirely risk-free behavior. In fact, eating snow can be downright dangerous when the snow in question is concealing foreign objects (i.e., rocks, sticks or garbage) or contaminated with toxic chemicals, like those used to prevent freezing on roads and sidewalks. For this same reason, Dr. Kurt also advises dog owners to be on the lookout for green or blue puddles of liquid on the ground, which could be antifreeze—a sweet-tasting chemical that’s extremely dangerous when ingested.

Furthermore, Dr. Kurt cautions against allowing your dog to dig into hard-packed snow or chunks of ice, which “can be difficult for dogs to chew and could potentially cause dental issues.” The takeaway? A mouthful of freshly-fallen snow is fine every once in a while, but if you do allow the behavior, you’ll need to keep a watchful eye, as dirty snow can be seriously bad news for dogs. 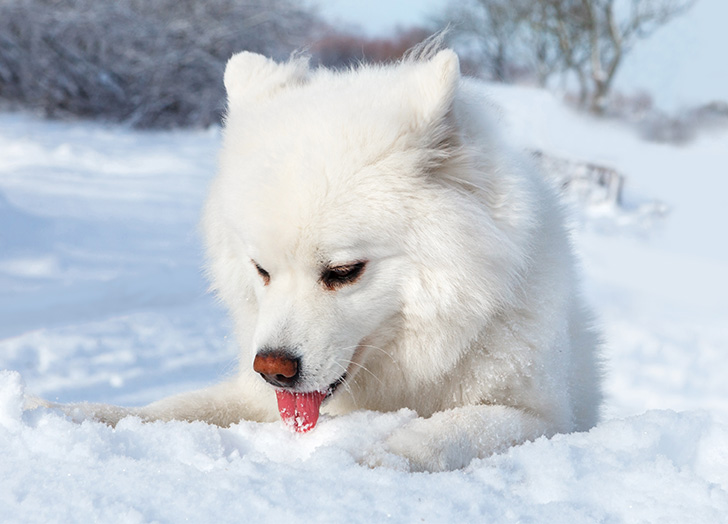 How to stop dogs from eating snow

Not too keen on the idea of carefully inspecting snow for potential contamination every time you take your dog on a winter walk? We don’t blame you. Fortunately, there are a few steps you can take to keep your four-legged friend away from snow (and spare yourself the worry). For starters, the vet suggests offering your dog a large bowl of fresh water prior to every walk so thirst is not a factor. (Makes sense, right?)

Aside from that, the best way to discourage the behavior is simply to keep your dog on a leash during walks, as Dr. Kurt says this will allow you to “easily direct them away from high traffic surface areas that may have been treated with de-icing products,” or otherwise contaminated. Finally, Dr. Kurt recommends preventing dogs from tracking in, and potentially licking off, any salt or chemicals they may have stepped in by making use of paw protection (i.e., pet-specific booties) or training them to thoroughly wipe their paws after walks.