18 French Dog Breeds That Have Us Saying Oui, Please!

Stop bingeing Emily in Paris for just a second to admire the chic chiens from the country that brought us Champagne and L’Occitane. In addition to thanking France for its high fashion and gourmet cuisine, we must thank its indigenous canines. French dog breeds have spent hundreds of years keeping farms, families and livestock safe from predators. More than anything, France excelled in churning out dedicated hounds with strong noses and stubborn demeanors. Another trait you’ll notice among French dog breeds? They’ve got minds of their own.

Anyone who’s seen Les Miserables or Marie Antoinette understands a lot went down in France in the 18th and 19th centuries in terms of class wars. Until that time, aristocrats and royals in the country owned hordes of scent hounds and pointers used for hunting everything from deer to boar to pheasant. Since these rich folks could afford to hunt on horseback, they bred tall, elegant dogs who could keep up with a galloping horse.

Peasants, on the other hand, not only couldn’t afford horses, they could barely afford caring for more than one dog. So, according to the American Kennel Club, several basset breeds (“bas” means “low” in French) were developed to accompany hunters on foot. Beyond that, French dog breeds had to fulfill many roles if they were the only pup on the farm, which is why you’ll notice many dogs on our list have served multiple purposes over the years.

Different regions eventually developed different breeds well-suited to particular terrain, though most dogs had wide expanses to roam and explore. This is also why so many dogs descended from French breeds have independent streaks. While they had to be devoted and loyal companions, they were also given lots of space to kind of do their own thing (or as much time as they wanted to track a scent).

One piece of advice: Be careful mixing a French scent hound with smaller pets like cats or rabbits. Some are such avid hunters they may mistake another pet for prey, despite having grown up alongside it.

20 Most Expensive Dog Breeds That Are Worth Every Penny 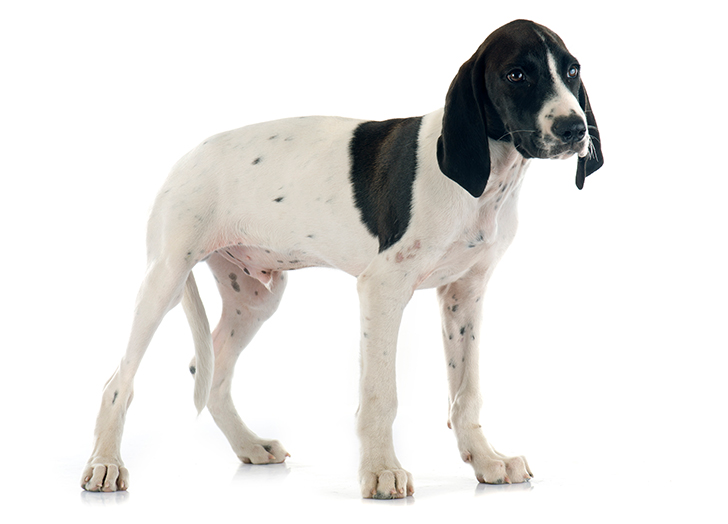 Also known as the Braque d'Auvergne, the Auvergne Pointer is an incredibly devoted and sensitive dog bred to hunt right alongside its humans. Originally bred in the 18th century, Auvergne Pointers have Dalmatian-esque coats, covered in tiny white spots. They’re rare these days, which is a shame because these pups love people and kiddos. The Societe Centrale Canine says Auvergnes adapt well to a variety of environments. 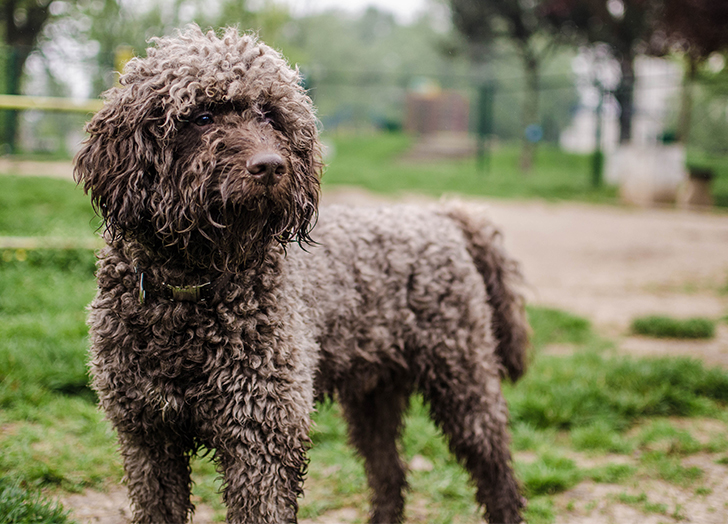 Sure, Barbets only debuted at Westminster last year, but they’ve spent about 500 years roughing it in the chilly marshlands of France retrieving ducks and geese for hunters. Their name is pronounced “bar-bay” and comes from the French word for beard, “barbe,” which makes sense when you see their long, curly coat. Fun-loving and family-friendly pets, Barbets are active and intelligent pups. 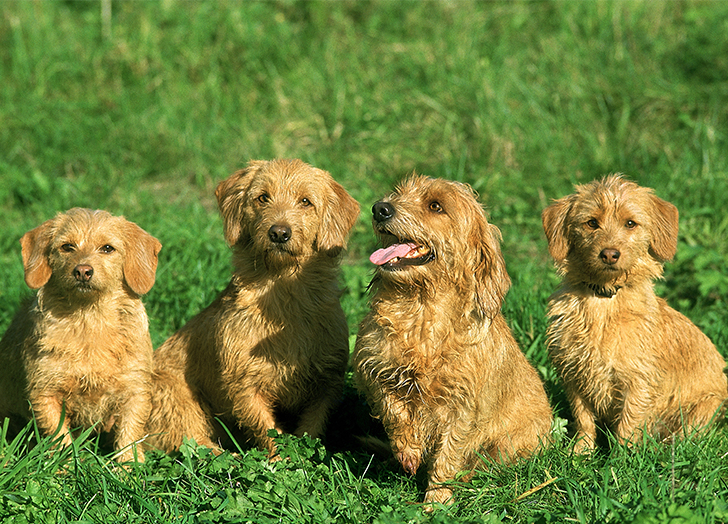 Basset Fauve de Bretagne translates to Fawn Colored Brittany Basset, but could easily stand for “cheerful and active companion!” These canines have been around since the 1500s and are closely related to the now extinct Grand Fauve de Bretagnes (a larger hound version of the Bassets). These dogs need lots of exercise and playtime, ideally in a fenced-in yard. They’ll follow their noses anywhere. 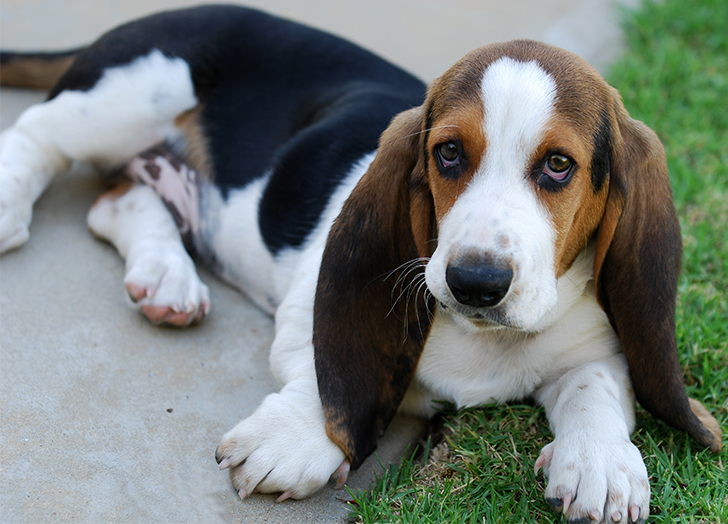 Unlike some French Bassets, the Basset Hound is incredibly popular in the United States. It ranks 39th out of 202 breeds on the American Kennel Club’s list. Developed way back in the 6th century in France as hunting dogs, today these hounds still have keen noses and powerful—albeit short—legs. They’re definitely on the lazier side, but daily walks are necessary to keep them in good health. Get a good grip on that leash, because Basset Hounds won’t stop chasing a scent once they’ve caught it (aka, stubbornness is inevitable). 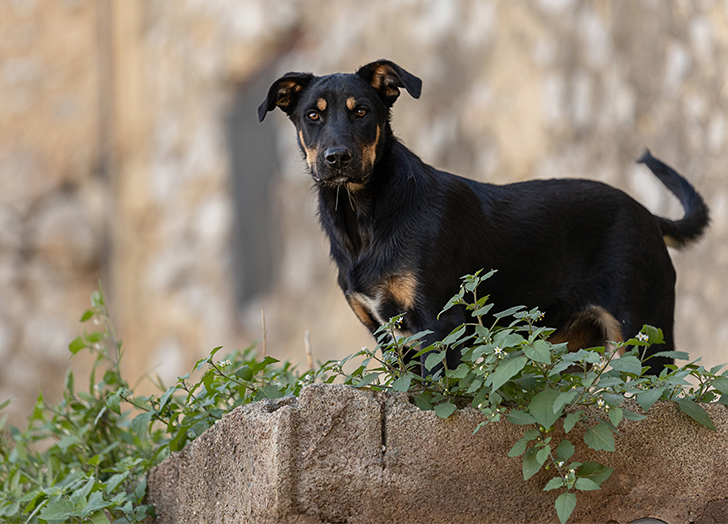 Talk about an overachiever! Beaucerons are not only ancient dogs (they were originally bred in the Middle Ages), they’ve dabbled in a little of everything over the years. Beaucerons have acted as guardians, rescuers, herders and even soldiers carrying messages during wartime. The American Beauceron Club says their versatility and intelligence means lots of early training to ensure a well-behaved pet. 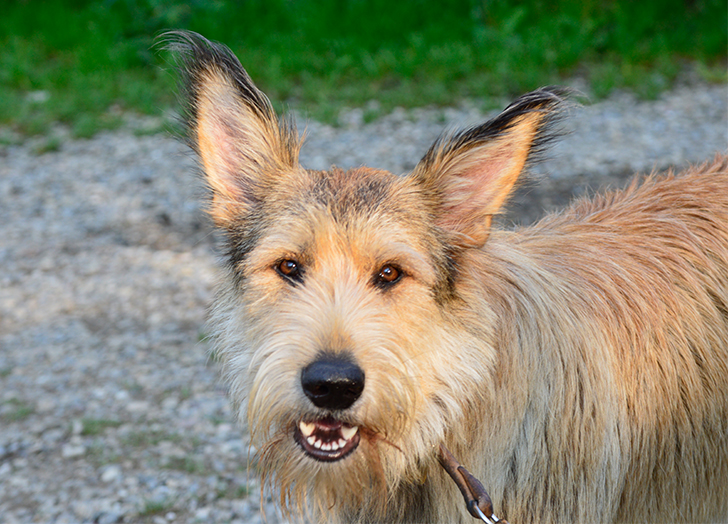 Known as a pasture dog, the Berger Picard is a valiant sheepdog with centuries of herding experience. These are high-energy dogs! Get ready for spending lots of time outdoors and finding new ways to blow off steam. While stubborn, Berger Picards do enjoy pleasing their humans, so if you train early and often with positive reinforcement, you should have no trouble corralling your pup. If you want to see one in action, watch 2005’s Because of Winn-Dixie. 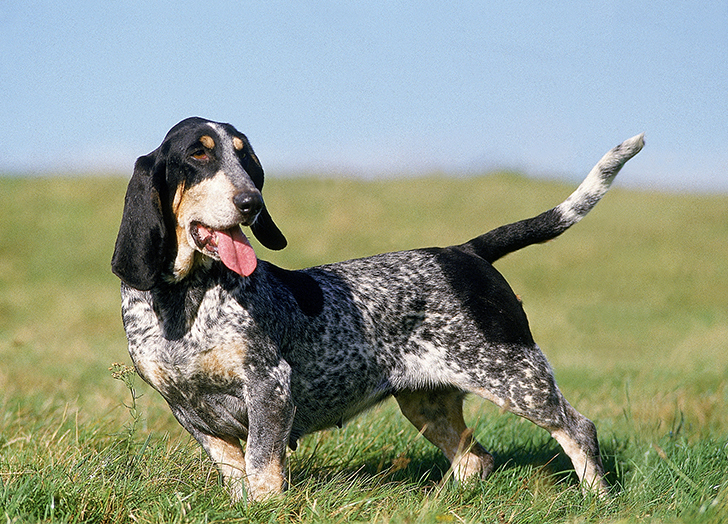 Similar to Auvergne Pointers, Blue Gascony Bassets (Basset Bleu de Gascogne in French) have speckled black and white coats that almost look blue. Shaped like Basset Hounds, these dogs hail from Gascony in the southwest of France. Though they’ve participated in wolf and deer hunts (wow) since the 12th century (wow!), Blue Gascony Bassets almost went extinct in the late 1900s. Independent and protective, these dogs will be trickier to train, but well worth the effort. 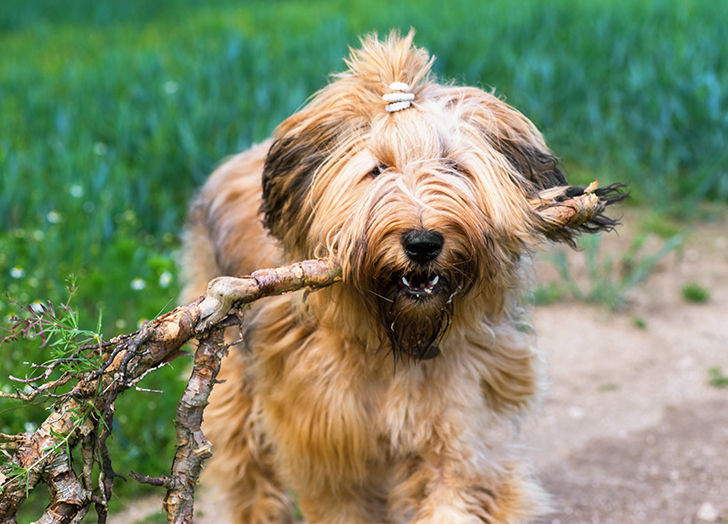 A relative of both the Berger Picard and the Beauceron, the Briard is a breed with the confidence of a seasoned professional and the liveliness of a puppy. They’ve been dedicated workers (for the French army) and protective family pets. As smarties, Briards learn quickly and love having a job to do. Maybe this is why both Napoleon and Thomas Jefferson were fans! 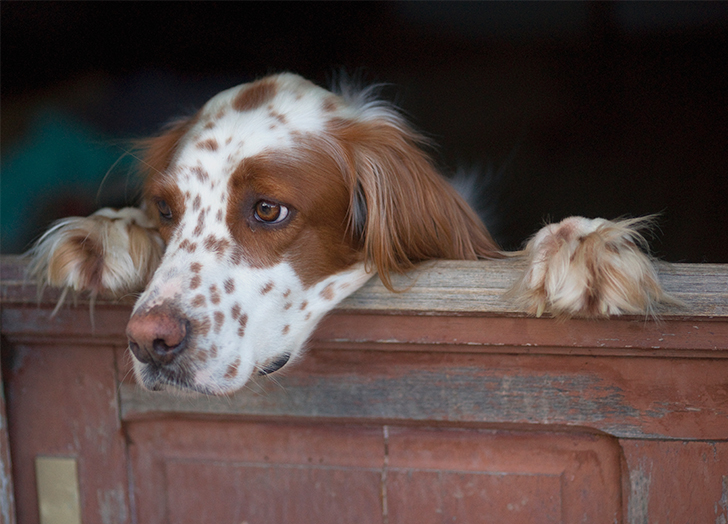 Brittanys are smart dogs with sweet personalities. While they love being outdoors exercising with their favorite people, they are more than willing to snuggle up at night and relax. Named for their origins in western France, Brittany pups were primarily pets for peasants in the 17th century who needed versatile animals to hunt and herd. Today, they are awesome, obedient family pets. 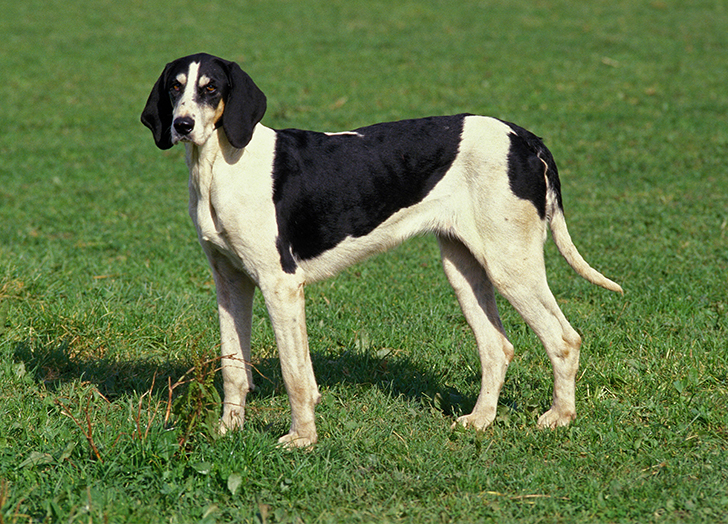 The Chien Français Blanc et Noir (French White and Black Hound) is not a dog for inexperienced dog owners. These hounds and their long legs are avid deer hunters and thrive in households with other dogs (but aren’t so great with smaller animals like cats). While they train well, they’ll chase anything (especially deer) and have very loud barks.

Corsica is an island and French territory in the Mediterranean Sea between France and Italy. The Corsican Dog is its national symbol and a gorgeous one at that! Their brown and tan brindle coats and floppy ears signal their calm, yet regal disposition. In the 16th century, they were primarily sheep herders and guard dogs; today they are rising in numbers and popularity around France as family pets. 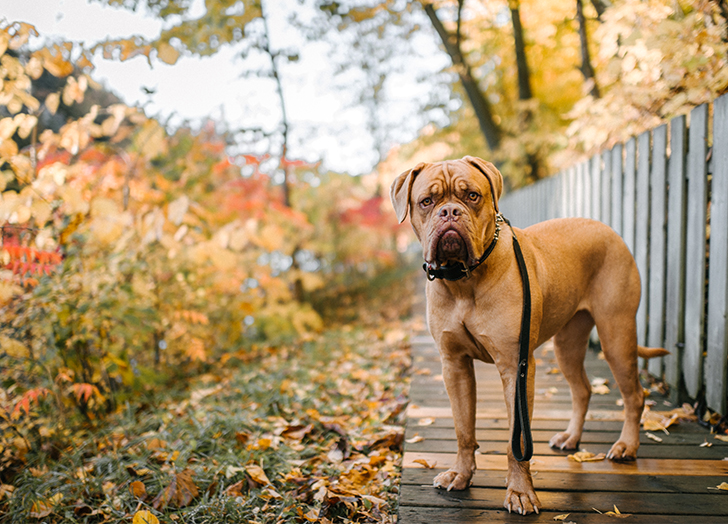 Talk about a dog who loves their family! The super affectionate Dogue de Bordeaux isn’t afraid to protect his home and humans. Big, mastiff-style canines, they unfortunately are prone to bloat and many other health issues. Reminiscent of and similar to Bulldogs, these pups were used as fighters centuries ago but have since earned a reputation for loyal family pets. Be sure to train early and firmly to instill good behavior habits. 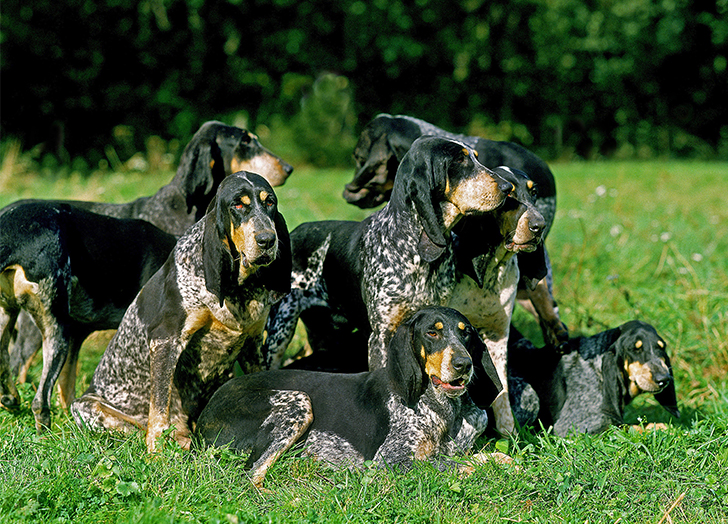 These scent hounds, though adept at hunting, are actually known for being lazy! Grand Bleu de Gascogne dogs are very skilled when it comes to picking up and tracking scents, but prefer low energy activities to running amok. They still require plenty of space to roam and need to be trained well to ensure they don’t wander off or ignore commands. For centuries, these pups and their cousins the Blue Gascony Bassets have thrived in groups of other dogs. 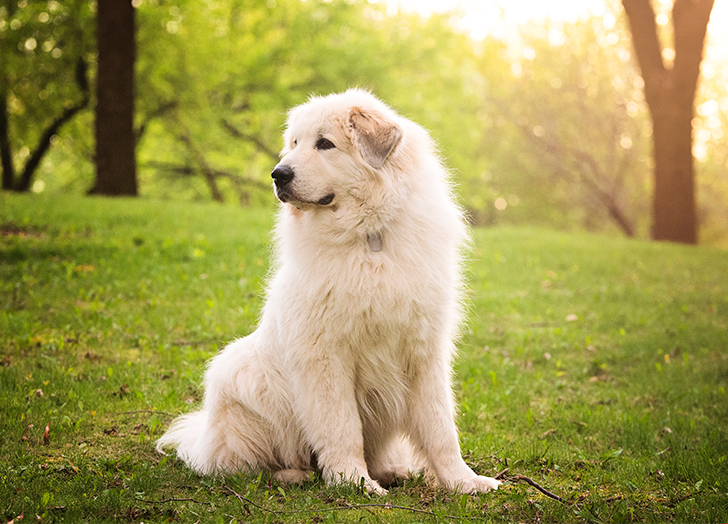 There aren’t enough great things to say about the Great Pyrenees! These are giant, sweet, lovable animals who do well with kids and have a rich history of guarding everything from sheep in the Pyrenees Mountains to the castles of King Louis XIV. Mellow yet protective, these dogs have thick, white, weatherproof coats and do well in cold climates. Unlike most other dogs on this list, their prey drive is low. 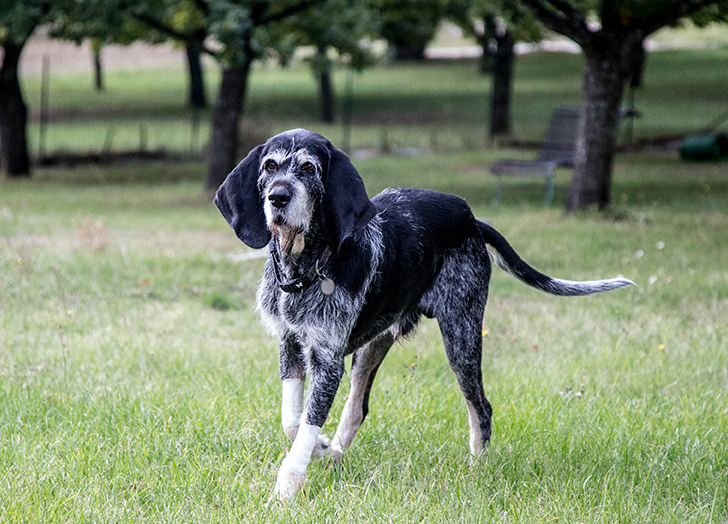 The Griffon Bleu de Gascogne is another of the Blue Gascony dogs bred to hunt. This pup has a longer coat and more rugged look, but still maintains a good working sensibility. Reserved with strangers, at home Griffon Bleus are gentle and kind. A family who enjoys hiking or camping is ideal because these dogs love their exercise and the outdoors. 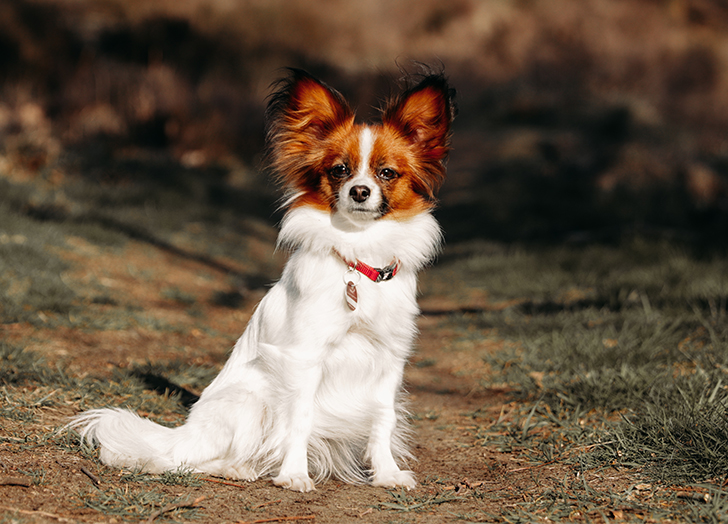 Papillon is the only toy breed on our list (aside from Phalène, which is an earlier variation of the Papillon). Thought to be descendants of the Continental Toy Spaniel, these pups emerged in the 16th century and over time developed their signature “butterfly ear” look. Today, they are lively, happy companions who love to play with the big dogs and go everywhere with their favorite humans. (They’re also one toy breed that does exceptionally well with kids!) 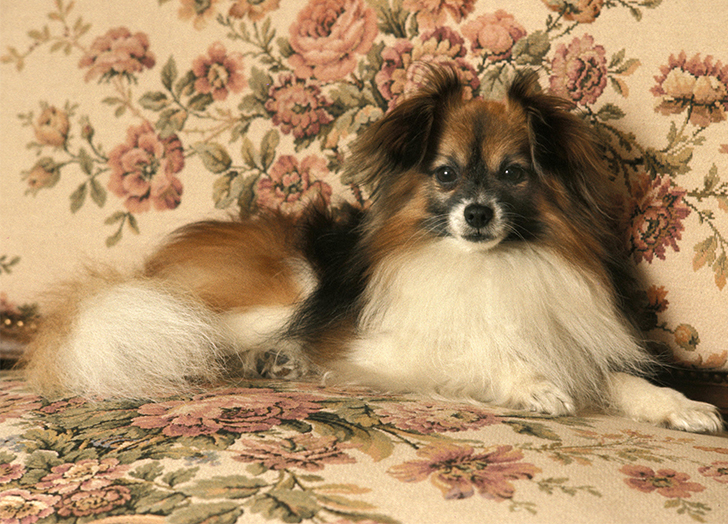 Like Papillons, Phalènes are tiny toy dogs with big personalities. Considered a predecessor of the Papillon, both versions can be born in the same litter today and are essentially the same dog and judged by the same standards at dog shows. Both breeds were favorites of nobility years ago and can be found in many paintings from the 16th and 17th centuries. Consider agility and course training for these tiny pups! They love it and excel at it. 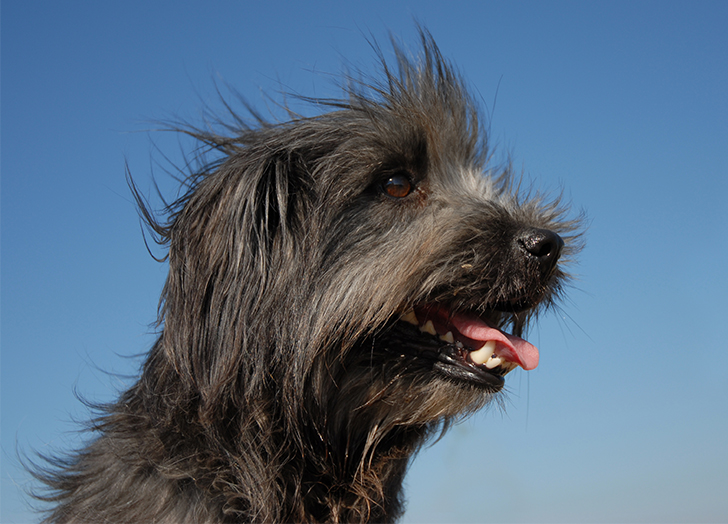 Along with the Great Pyrenees, Pyrenean Shepherds herded sheep and livestock in the mountains between France and Spain. They are incredibly eager to please and thus train very well. They come in both rough- and smooth-coated varieties, though every Pyr Shep you meet is playful and diligent when it comes to tasks.