Get ready for more games, because Netflix has officially renewed Squid Game for a second season.

Netflix's Co-CEO, Ted Sarandos, just confirmed that the smash-hit series, which beat Bridgerton as the most-watched debut show in the streaming platform's history, will be returning with more episodes.

﻿Variety ﻿reported that Sarandos was asked if there would be a second season of the show during Netflix's fourth quarter 2021 earnings interview, to which he said, “Absolutely. The Squid Game universe has just begun.”

Now, as we gear up for more episodes, we've been combing through fan theories that circulated following the explosive first season, and there's one that we think could change everything. Many viewers believe that the main character, Seong Gi-hun (played by Lee Jung-jae) is actually the son of Oh Il-nam (AKA Player 001, played by Oh Yeong-su). 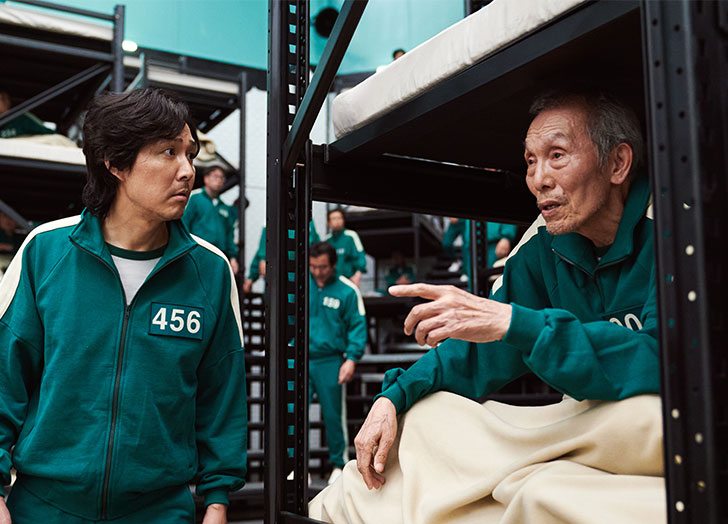 That's right—as CBR pointed out, there seem to be many signs pointing to this surprise twist. For instance, when Il-nam gives his jacket to Gi-hun, it acts as a symbolic passing of the torch, especially since we later learn that Il-nam was running the horrific competition the entire time.

Also, at one point, Gi-hun asks for chocolate milk, saying he can't digest regular milk properly, to which Il-nam says, “As a kid, I’m willing to bet you got spanked a lot.” And when Gi-hun asks, “How did you know?” Il-nam replies, “My son did too. He was just like you, friend.”

﻿PopBuzz ﻿also notes that we learn these two characters grew up in similar areas, based on the neighborhood diorama Il-nam creates for one of the games (based on his own home), which causes Gi-hun to say, “And you know something? Our alleyway looked very similar.”

While Gi-hun and Il-nam developed a strong relationship during the games, their bond seems to extend further than just mere friendship. Even when Il-nam passes away in the final episode, it is ultimately Gi-hun who is there by his side, which may have been an effort by Il-nam to spend his final moments with his son. It is also important to note that we only ever see Gi-hun's relationship with his mother and never his father.

Although, this theory wouldn't entirely make sense, because you have to wonder why Il-nam would want to risk his son's life by entering him into the games. However, if this plotline turns out to be true, this could be a shocking revelation for Gi-hun in season 2.

We can't wait to see what twists await us.

﻿Details on Every Single ‘Virgin River’ Season 4 Theory Out There