I am an absolute wimp when it comes to gore and violence in TV shows and movies. But something about the candy-colored images and funny name of Netflix’s new Squid Game intrigued me enough to stop and watch the trailer. The premise is like a Nickelodeon game show turned fatal, with “contestants” playing a series of children's games where they get murdered if they lose. It is pretty much immediately made clear that this show involves plenty of violence and yet I, a person who couldn’t even stomach the Wikipedia descriptions of movies like Saw or Final Destination, needed to know more—I needed to watch the show.

While the first episode was wonderfully compelling (if a bit jarring at times), it was the premiere episode’s abrupt end and the twists of episode two (and beyond) that really pulled me in and led a gore-averse pacifist like myself to devour all nine episodes. And I am not the only one—the show is currently the number one Netflix show in the U.S. 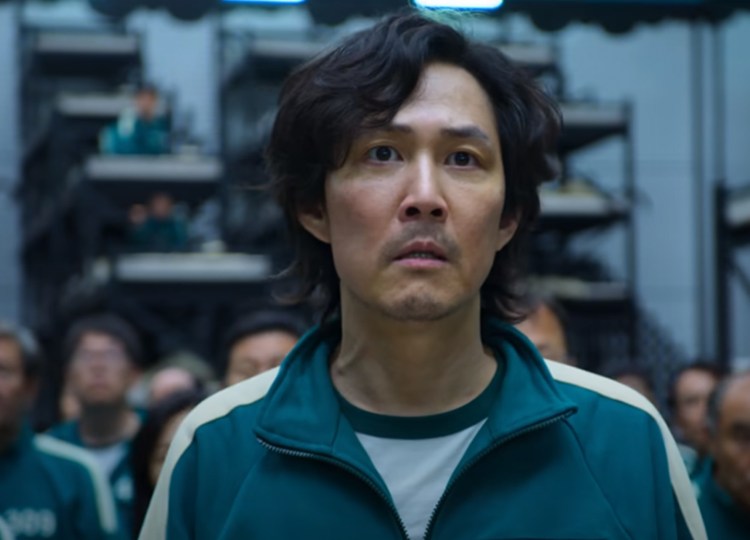 The first episode of this Korean thriller opens with an explanation of a charming playground game called “the squid game,” cluing us into the origin of the show’s title. (Don’t worry if you don’t grasp the rules of the squid game right away, all the games are explained in full later on.) We then jump to Seong Gi-hun, our main protagonist, eating at his mother’s house. Despite her advanced age, she works very hard trying to provide for herself and her adult son, while Gi-hun appears entirely ungrateful, going so far as to steal her debit card to pull money from the bank before heading off to bet on horse races. We learn he has an immense amount of debt, most owed to violent loan sharks who threaten to steal his organs if he cannot repay them (yeah, you should accept the horrifying absurdity of deals like this early on, as there are even more to come).

We see Seong Gi-hun take his young daughter out for a birthday dinner, gifting her with a neatly wrapped box won in an arcade game—another demonstration of his gambling addiction—that turns out to be an all too realistic looking water gun. On his way home, he meets a well-dressed stranger who offers him 100,000 won if he can win a game of ddakji (another simple playground game), but if he loses the man will slap his face. Gi-hun plays for god knows how long, losing round after round until his face is red and bruised before he finally wins just once and is gifted with the money as promised as well as a business card and an offer to play more games for cash if he so chooses. While it’s clear that our lead has a lot of issues, he’s also frustrated with his dwindling role in his daughter’s life and the burdens he places on his mother. He decides to take the stranger’s offer and play another game. Oh, how he’ll come to regret that decision.

Now we enter the dystopian Hunger Games-esque competition promised in the trailer. Gi-hun and 455 other players, all of whom are revealed to owe massive amounts of money to the government and more nefarious organizations, find themselves waking up in a warehouse dressed in matching green tracksuits with numbers attached. We meet the rest of the ensemble cast, including Cho Sang-woo (a “successful” businessman and Gi-hun’s friend from childhood), Kang Sae-byeok (a pickpocket who earlier stole money from Gi-hun) and Oh Il-nam (an old man recently diagnosed with a brain tumor and by far the most interesting of the side characters). Masked individuals prompt them all to sign a contract with just three clauses—a player is not allowed to stop playing, a player who refuses to play will be eliminated and games may be terminated if the majority agrees—and then the horrifying and deadly “games” finally begin. 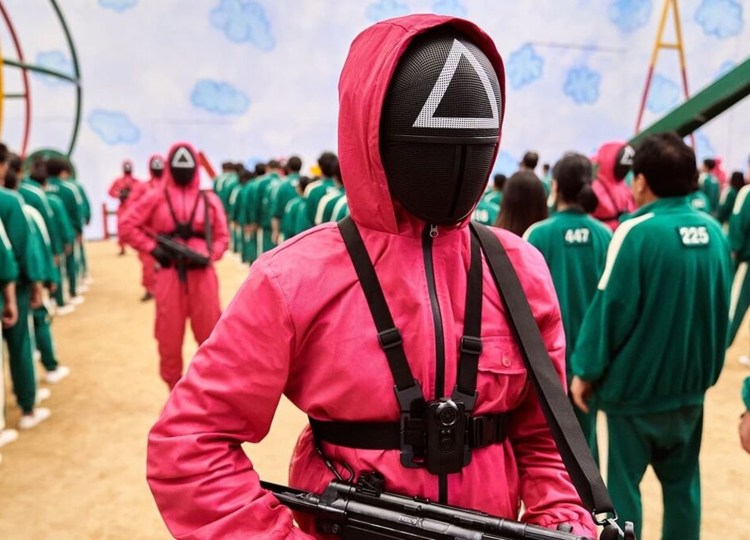 There were absolutely scenes where I squirmed in my seat, but realistically there isn’t all that much gore as compared with shows like The Walking Dead or Game of Thrones. The discomfort came much more from the disturbing juxtaposition between the candy-colored sets and nostalgia-filled games with folks being shot in the head with very little warning. The premise is obviously quite similar to The Hunger Games and Battle Royale, and the evil mastermind behind this gruesome setup feels vaguely similar to Jigsaw (in that they wear a mask and murder people through games) from Saw, but even if you watched and loved those films you won’t be able to guess where Squid Game is headed.

The sets are absolutely incredible and the music choices are perfection, but it’s the performances by Lee Jung-jae as Seong Gi-hun and Oh Yeong-su as the old man that really sold me and made me want to watch episode after episode. (HoYeon Jung also deserves high praise for her portrayal of Kang Saw-byeok, who is much more than just a rebellious pickpocket.) It isn’t made immediately clear whether or not the series of games must culminate in a single winner or if multiple people can split the prize money—a whopping 456 million won—and it isn’t so easy to decide who to root for. The thought of any of the main ensemble dying, as some must eventually do, is heartbreaking. ﻿Regardless, I must say congratulations to Netflix for transforming this scaredy-cat viewer into a horror-bingeing believer.

Squid Game is best watched as a 9-hour long movie so I highly suggest binging multiple episodes at a time. The episodes all vary in length and most end in what feels like the middle of a scene (don’t worry, they feel more like cliffhangers and less like frustratingly random breaks). Simply by the structure of the game setup, things become somewhat predictable or at least inevitable. But even though I could see where the show was headed, it didn’t detract from my enjoyment of watching and it was still exciting to see it play out all the way to the end. ﻿