We all know that Prince Harry isn't a typical royal. The Duke of Sussex went from being a rebellious party prince to a proud husband and father who resides in California—but that doesn’t mean he hasn’t been making an impact.

In case you haven’t noticed, the royal is keeping busy with charity work, alongside his wife Meghan Markle. And if you’ve been paying close attention to his interviews and public statements, you’ll notice that Harry has also been dropping some major insightful gems, whether it be about philanthropy, mental health or gender equality. Keep reading for 20 inspiring Prince Harry quotes.

16 Meghan Markle Quotes About Work, Feminism and Staying True to Yourself 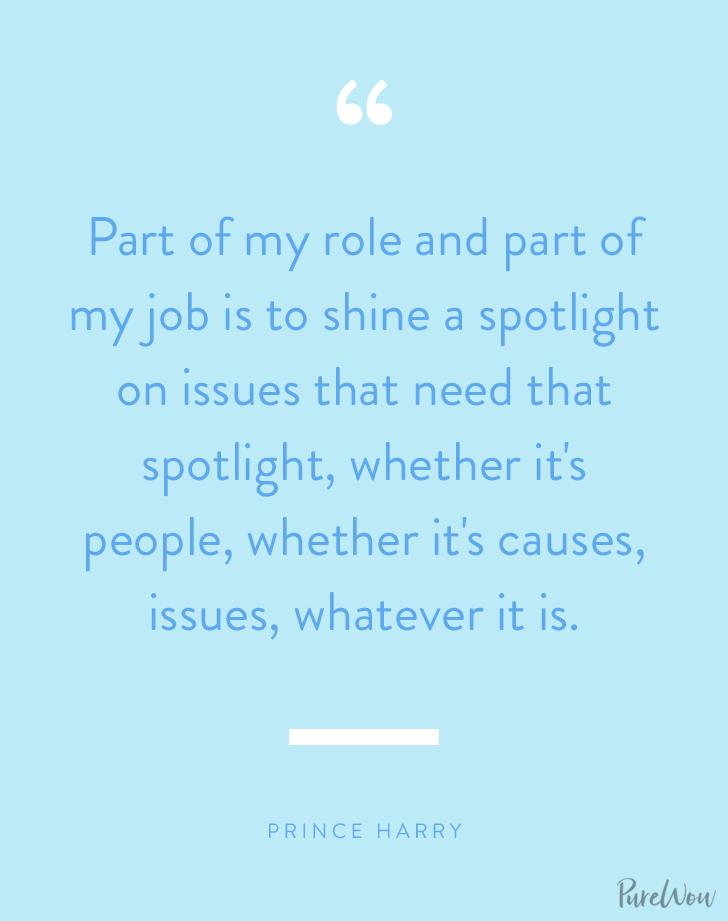 1. “Part of my role and part of my job is to shine a spotlight on issues that need that spotlight, whether it's people, whether it's causes, issues, whatever it is.” — Prince Harry 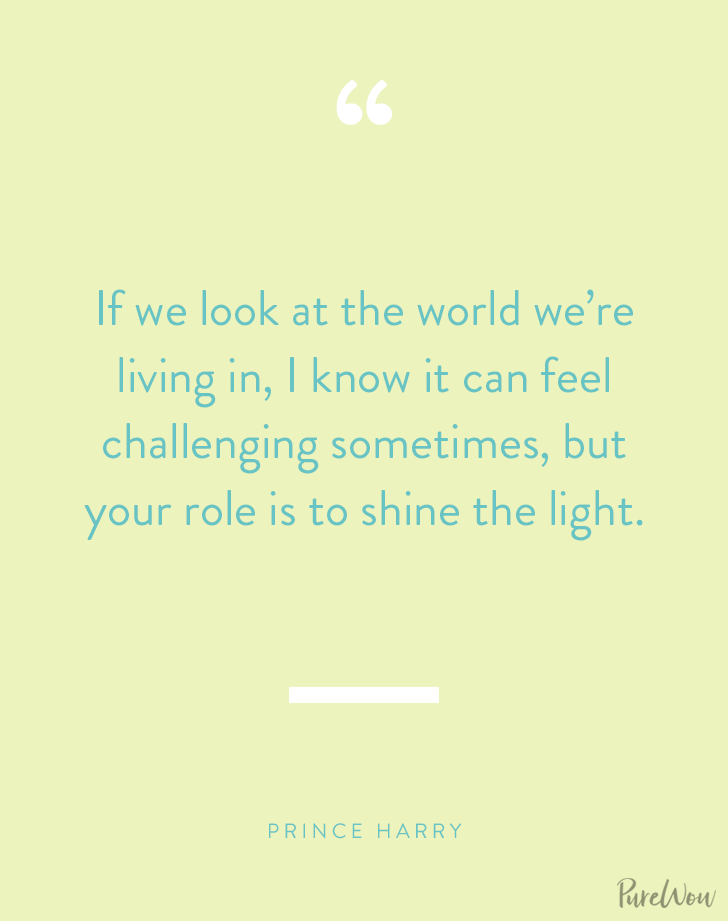 2. "If we look at the world we’re living in, I know it can feel challenging sometimes, but your role is to shine the light." — Prince Harry 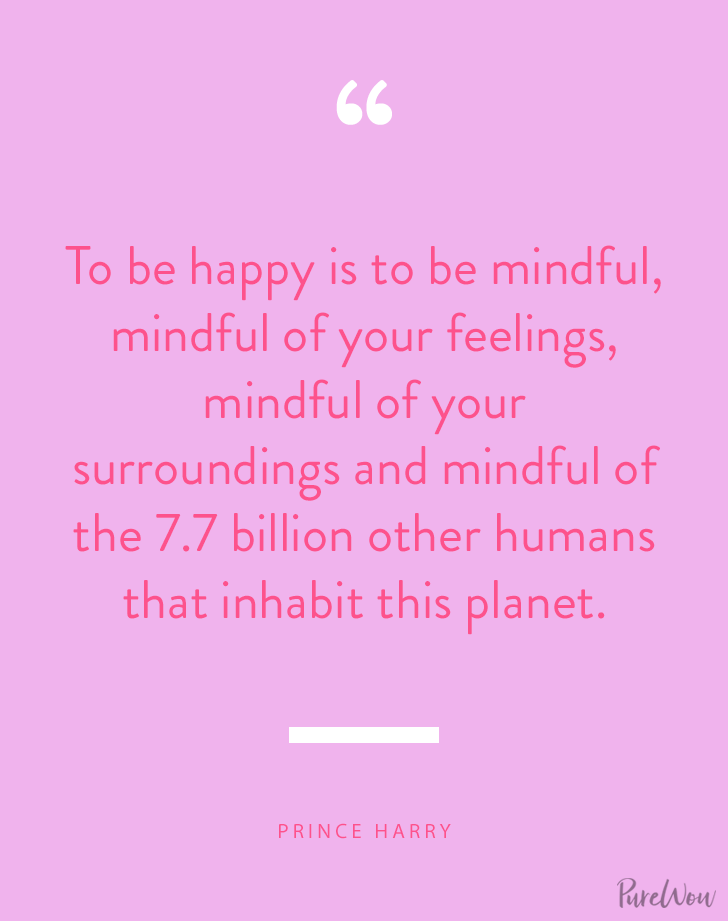 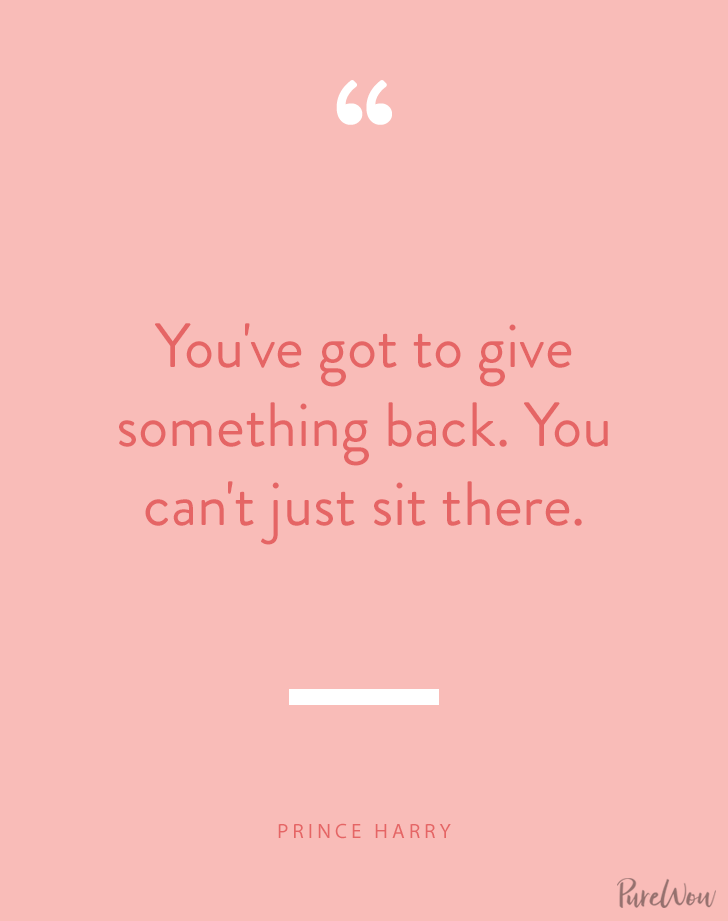 4. “You've got to give something back. You can't just sit there.” — Prince Harry

5. “Climate change is a humanitarian issue, not a political one, and one where we’ve been far too slow in waking up to the issues and acting on the damaging impact our ways of living are having on the world.” — Prince Harry 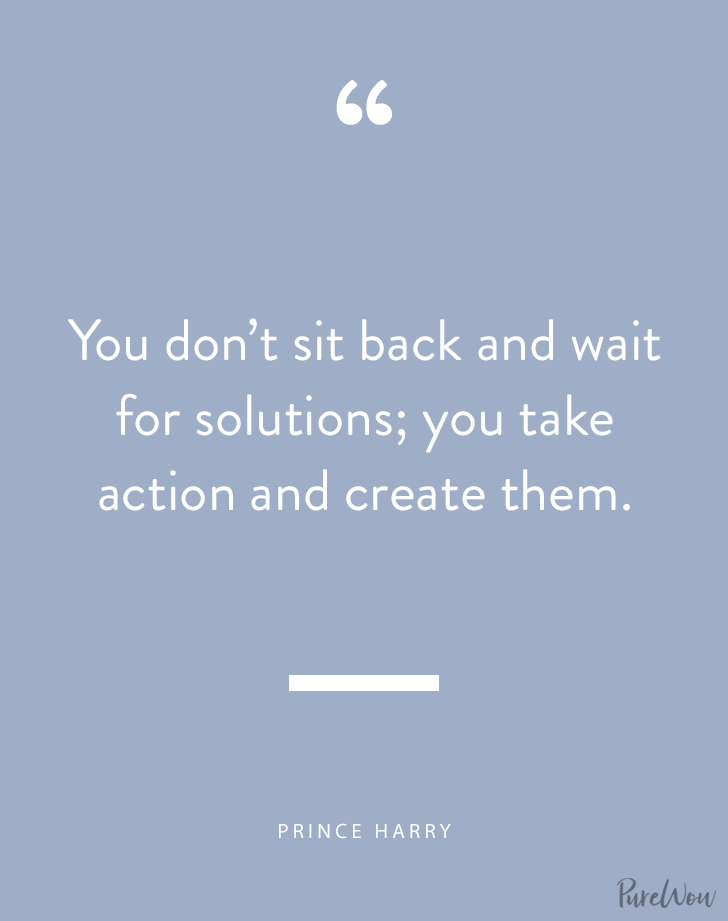 6. “You don’t sit back and wait for solutions; you take action and create them.” — Prince Harry 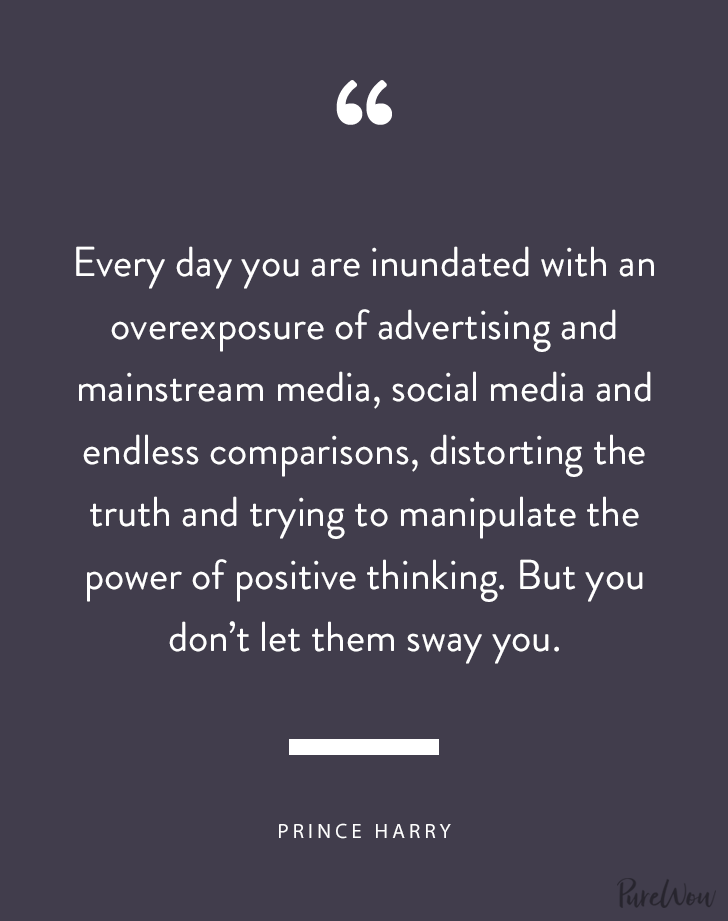 7. “Every day you are inundated with an overexposure of advertising and mainstream media, social media and endless comparisons, distorting the truth and trying to manipulate the power of positive thinking. But you don’t let them sway you.” — Prince Harry 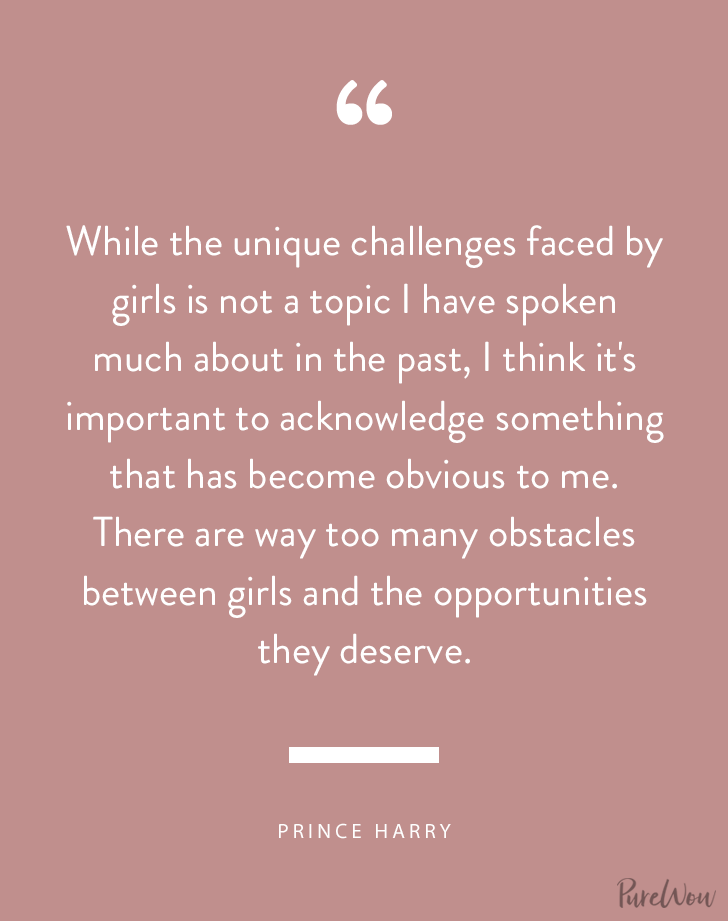 8. "While the unique challenges faced by girls is not a topic I have spoken much about in the past, I think it's important to acknowledge something that has become obvious to me. There are way too many obstacles between girls and the opportunities they deserve." — Prince Harry 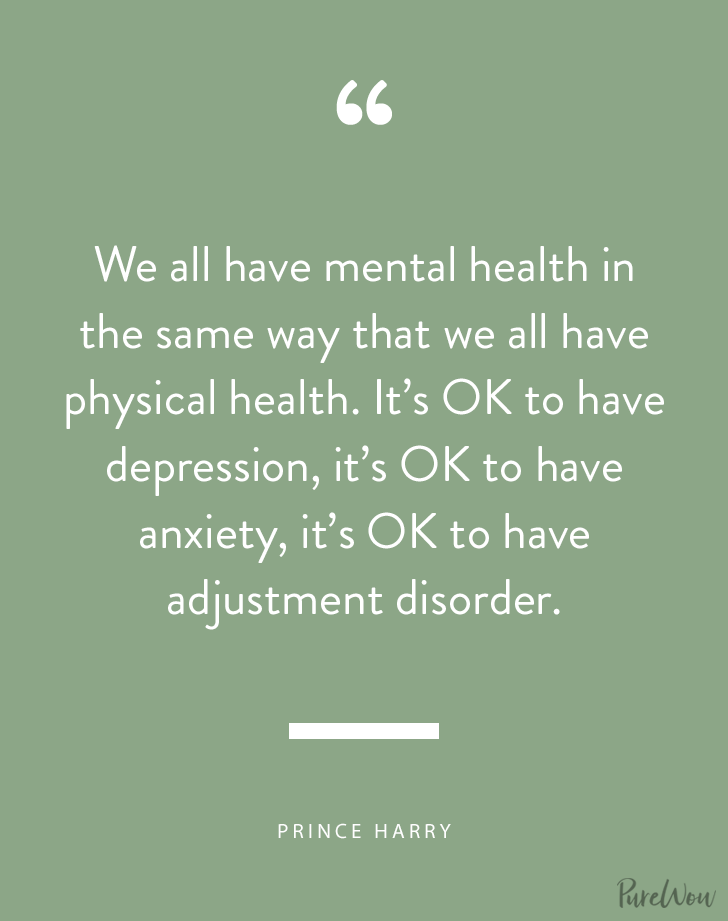 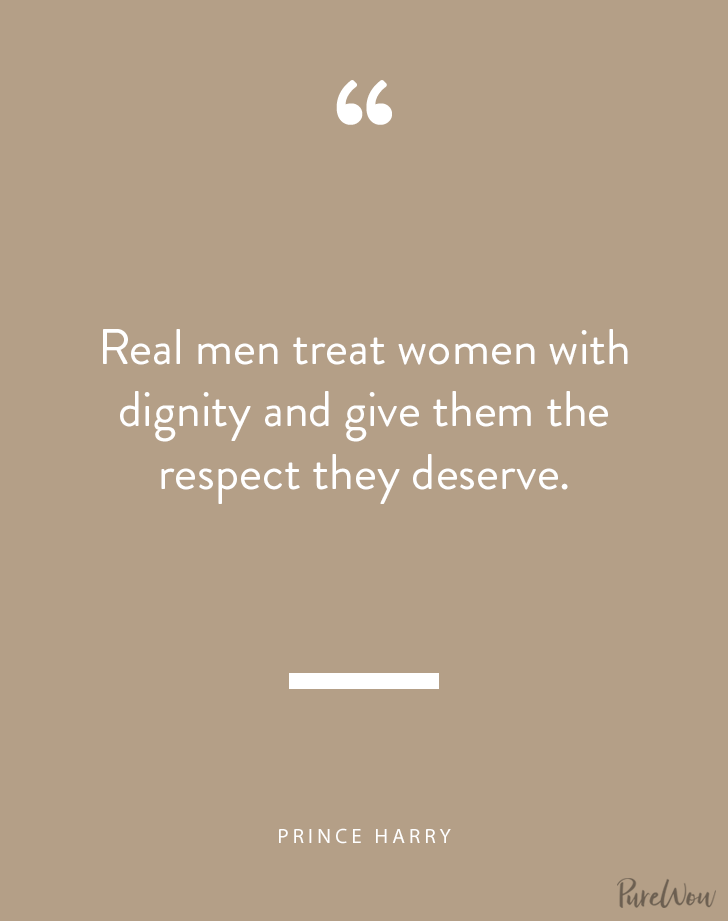 10. “Real men treat women with dignity and give them the respect they deserve." — Prince Harry 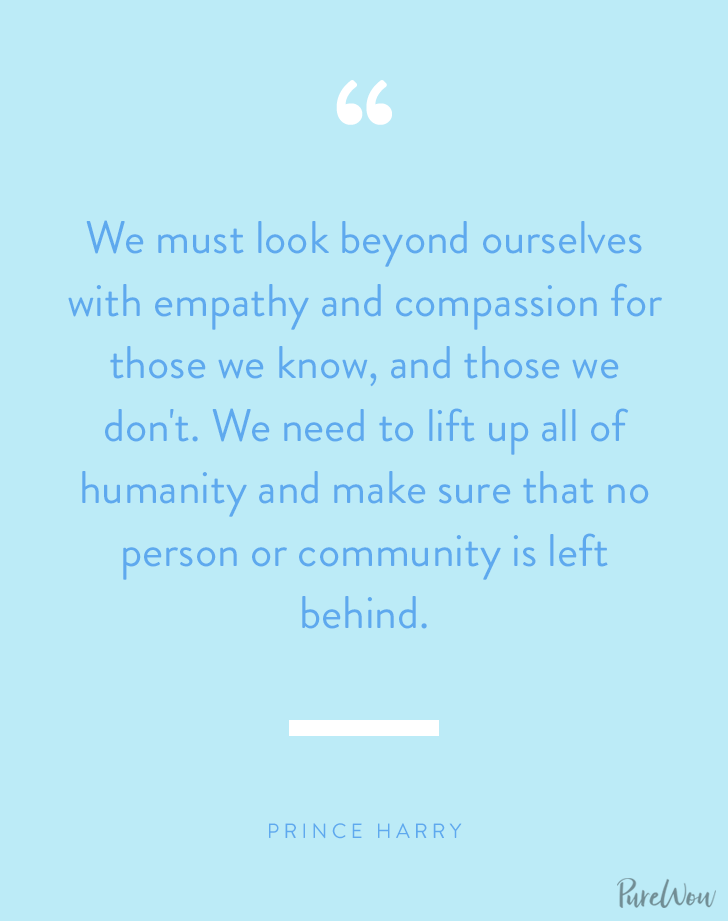 11. "We must look beyond ourselves with empathy and compassion for those we know, and those we don't. We need to lift up all of humanity and make sure that no person or community is left behind." — Prince Harry 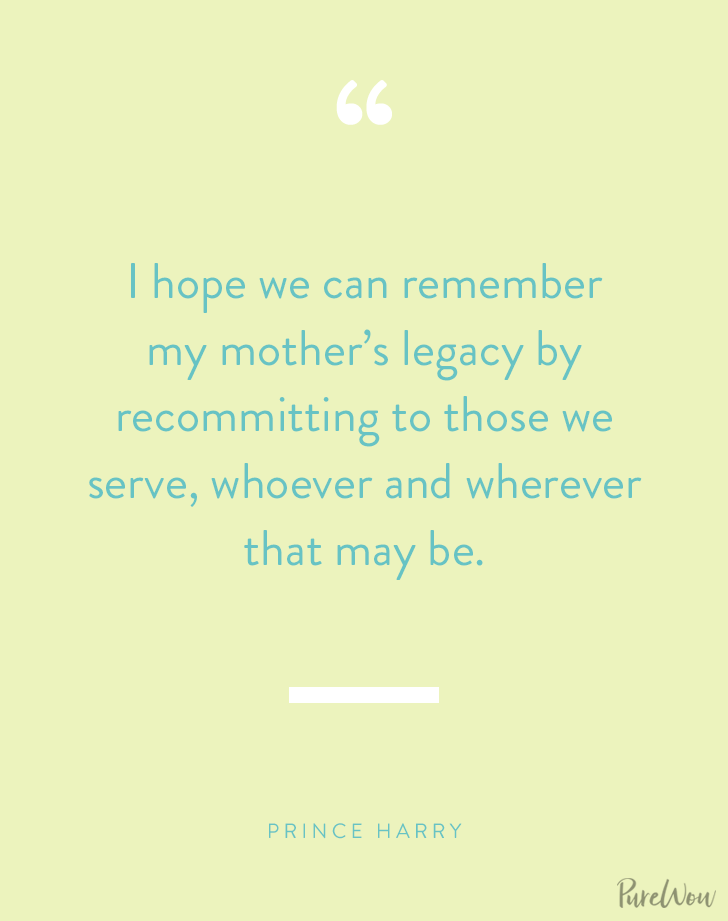 12. “I hope we can remember my mother’s legacy by recommitting to those we serve, whoever and wherever that may be.” — Prince Harry 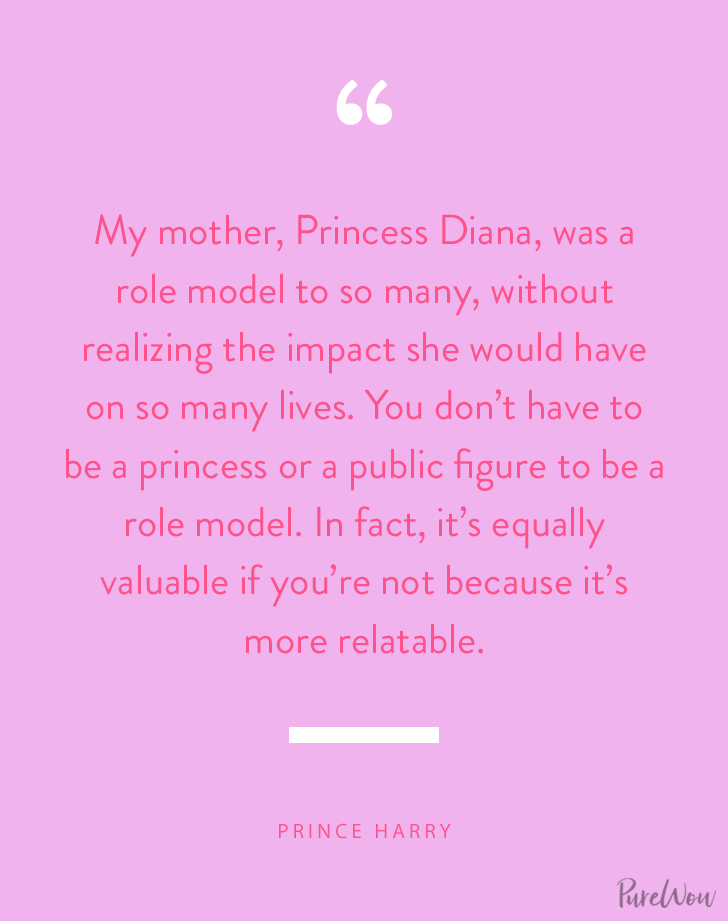 13. “My mother, Princess Diana, was a role model to so many, without realizing the impact she would have on so many lives. You don’t have to be a princess or a public figure to be a role model. In fact, it’s equally valuable if you’re not because it’s more relatable.” — Prince Harry 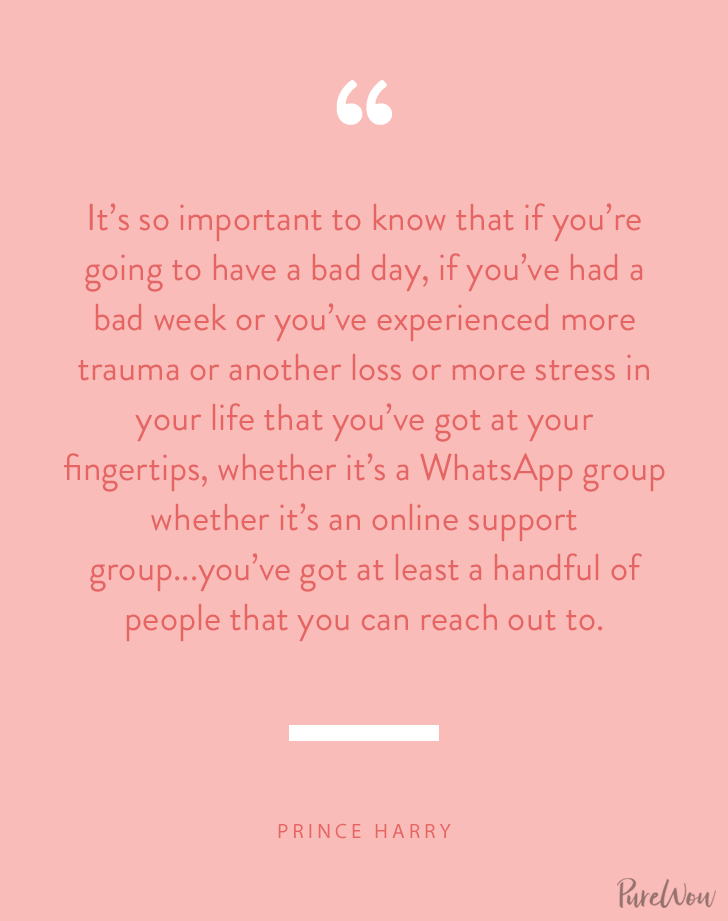 14. “It’s so important to know that if you’re going to have a bad day, if you’ve had a bad week or you’ve experienced more trauma or another loss or more stress in your life that you’ve got at your fingertips, whether it’s a WhatsApp group whether it’s an online support group...you’ve got at least a handful of people that you can reach out to.” — Prince Harry 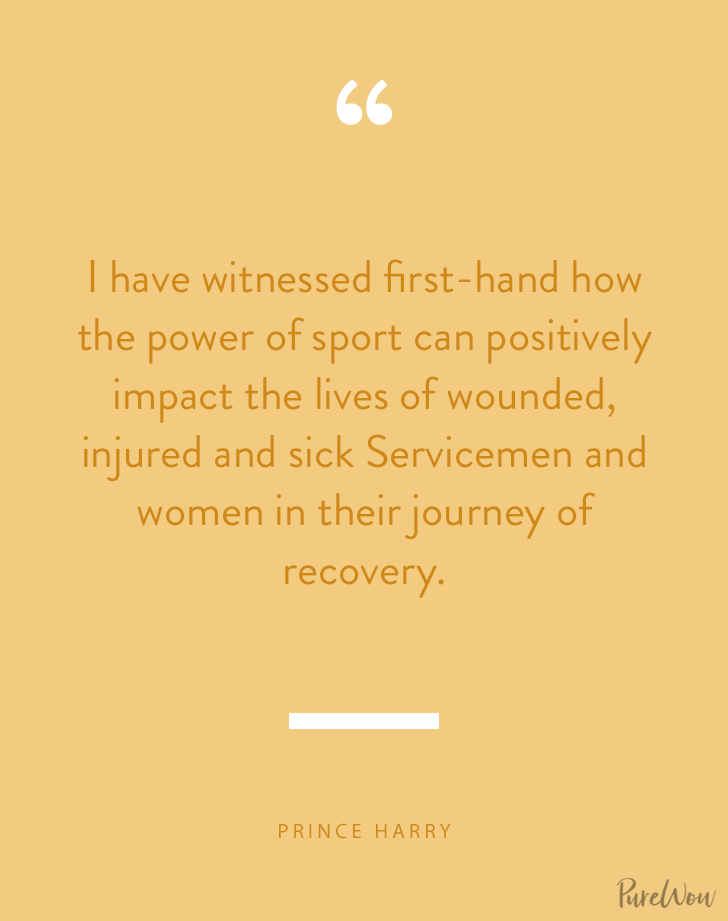 15. “I have witnessed first-hand how the power of sport can positively impact the lives of wounded, injured and sick Servicemen and women in their journey of recovery.” — Prince Harry 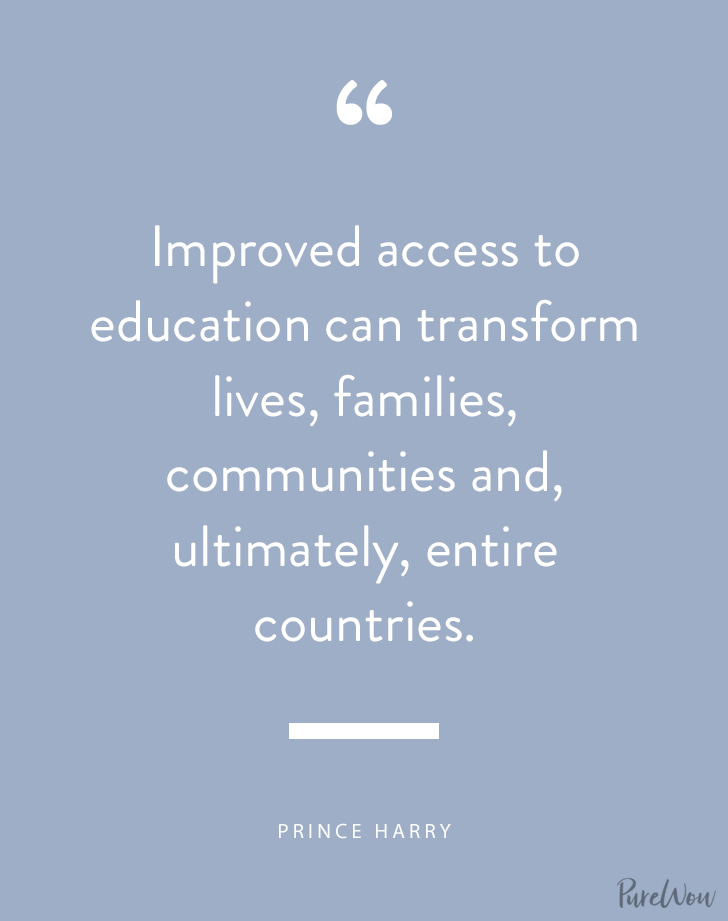 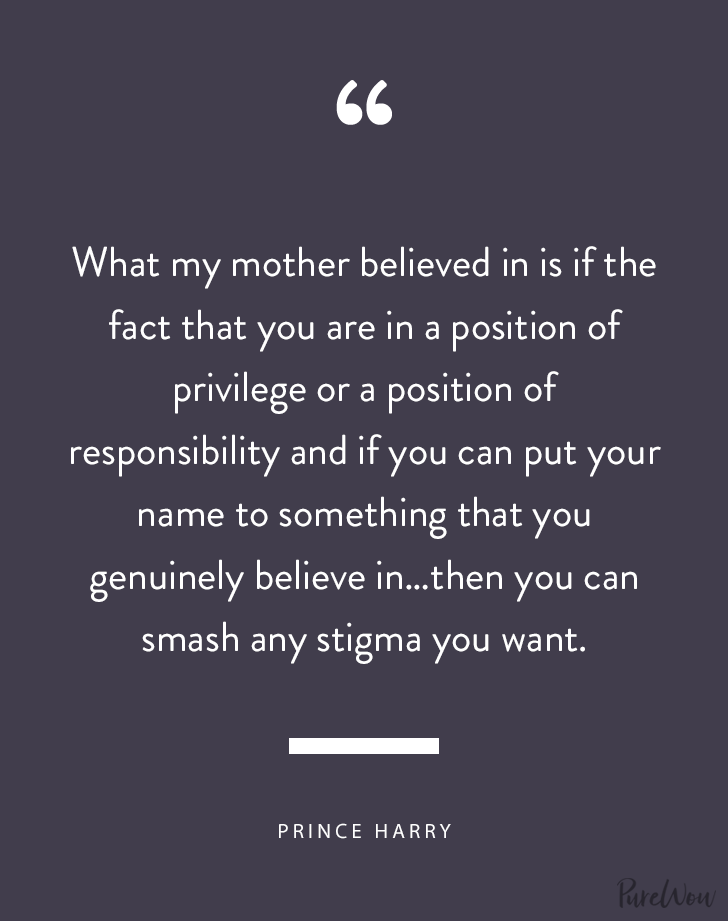 17. “What my mother believed in is if the fact that you are in a position of privilege or a position of responsibility and if you can put your name to something that you genuinely believe in…then you can smash any stigma you want.” — Prince Harry 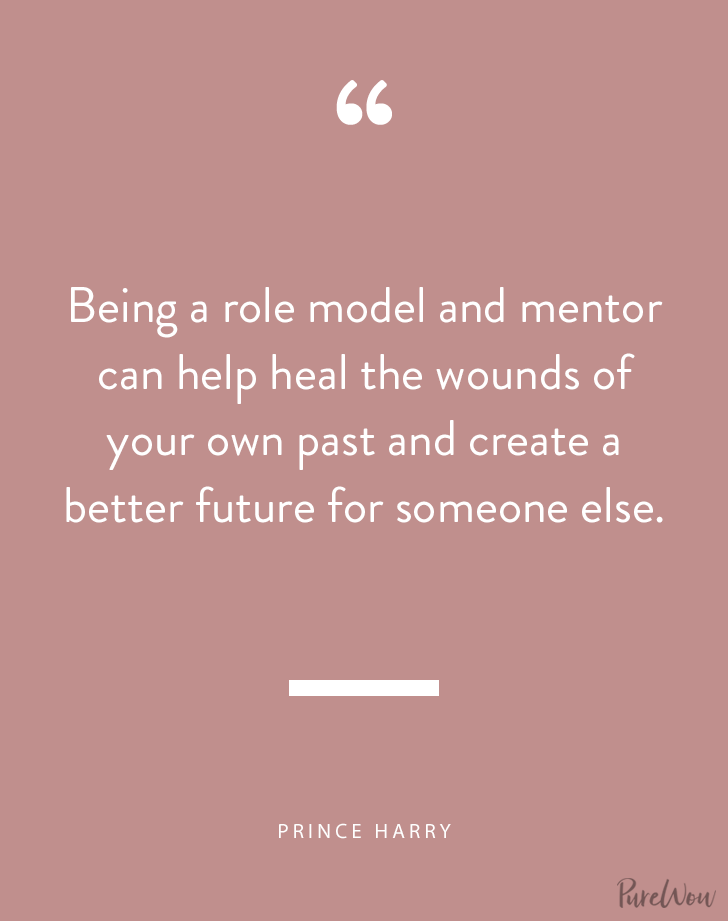 18. “Being a role model and mentor can help heal the wounds of your own past and create a better future for someone else.” — Prince Harry 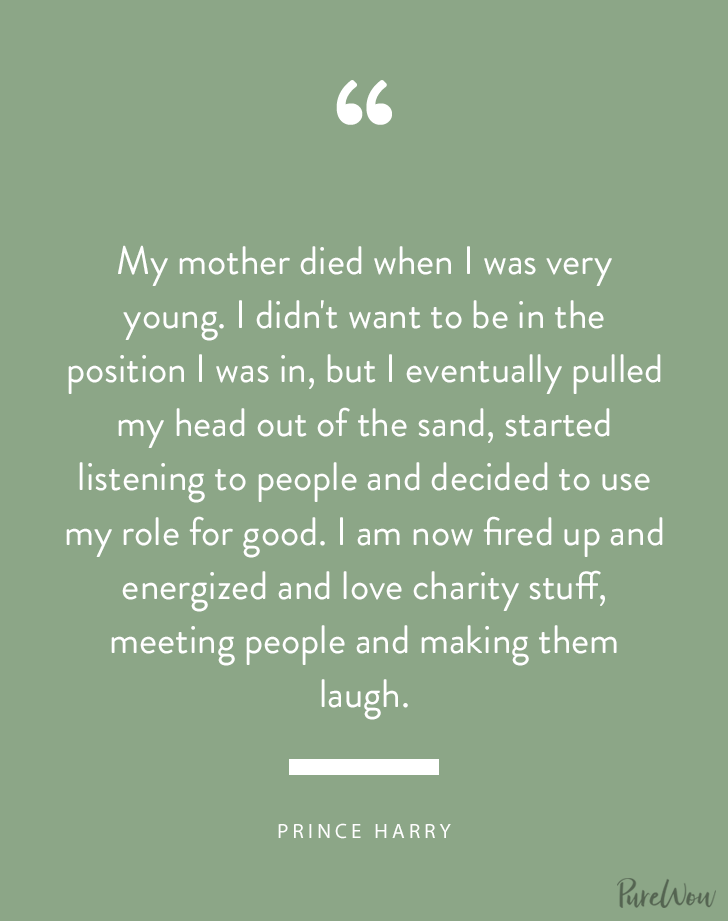 19. “My mother died when I was very young. I didn't want to be in the position I was in, but I eventually pulled my head out of the sand, started listening to people and decided to use my role for good. I am now fired up and energized and love charity stuff, meeting people and making them laugh.” — Prince Harry 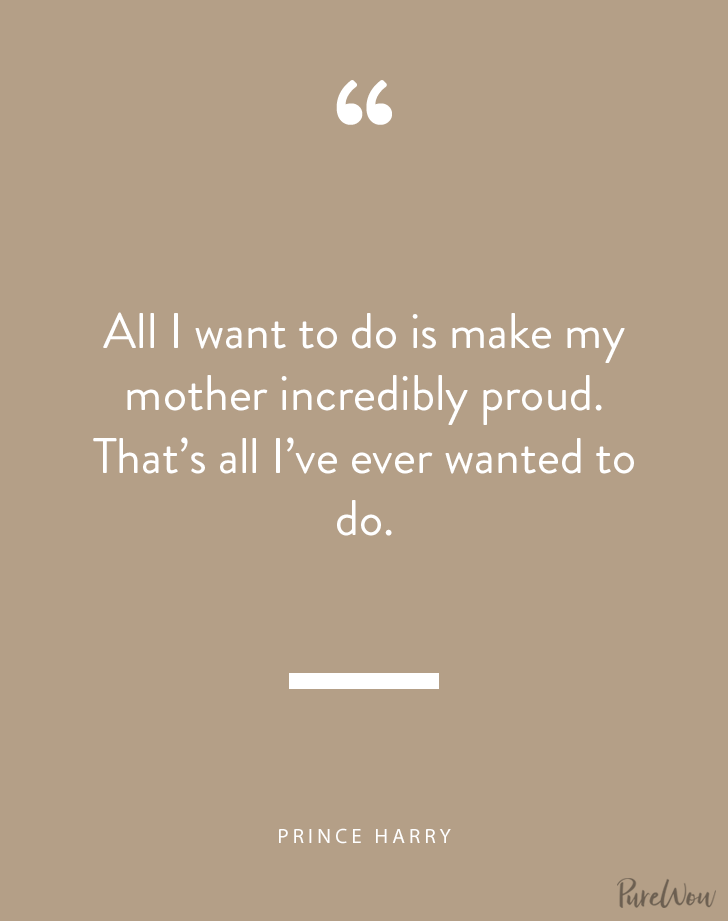 20. “All I want to do is make my mother incredibly proud. That’s all I’ve ever wanted to do.” — Prince Harry