Need a distraction? You’re in luck, because Netflix just released another must-watch movie, Operation Christmas Drop, which is based on the real-life military mission. The film has only been on the streaming service for about a week, and it already shot up to the number one spot on Netflix’s list of most-watched movies, before settling in at number three. (It’s currently ranked behind The Impossible and Mile 22. It’s still ahead of Knock Knock, The Grinch, Holidate and Easy A.)

So, what is Operation Christmas Drop about? And is it worth the watch? Keep reading for our honest review. 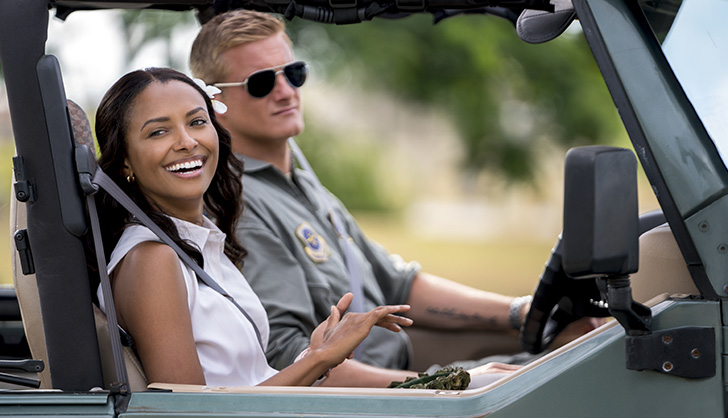 1. What Is 'operation Christmas Drop' About?

Operation Christmas Drop is like a cross between The Knight Before Christmas and Holiday in the Wild. The movie introduces viewers to Erica Miller (Kat Graham), a young woman who works as a political aide for a high-profile congresswoman. Think of her as an up-and-coming Olivia Pope (sophisticated fashion included), who does everything from handling scandals to saving her boss from boring conversations.

Erica’s job takes a predictable turn when she’s tasked with traveling to Guam to visit the Andersen Air Force Base. The congresswoman is skeptical about the annual holiday tradition, dubbed Operation Christmas Drop, after one of the pilots, Andrew Jantz (Alexander Ludwig), posts a racy photo on social media. Now, it’s Erica’s job to determine if the program should get cut.

Background information: Operation Christmas Drop is a real-life military mission that’s been around since 1952, when an American aircrew wanted to spread holiday cheer to the small island of Kapingamarangi. Every year, the base has worked diligently to airdrop medicine, toys and supplies to thousands of people living in Micronesia.

When Erica arrives at the base, she’s picked up by—drumroll, please—Andrew, who shows her around. They butt heads at first (like every fictional Hallmark couple), but after spending time together, they grow fond of each other. Erica even realizes that Operation Christmas Drop isn’t a waste of money, it’s a donation-based tradition that benefits hundreds of families during the holidays.

We don’t want to spoil the ending. But if you think you can guess what happens next, you’re probably wrong. In particular, what will Erica’s boss do when she finds her aide supporting Operation Christmas Drop instead of abolishing it? There’s only one way to find out… 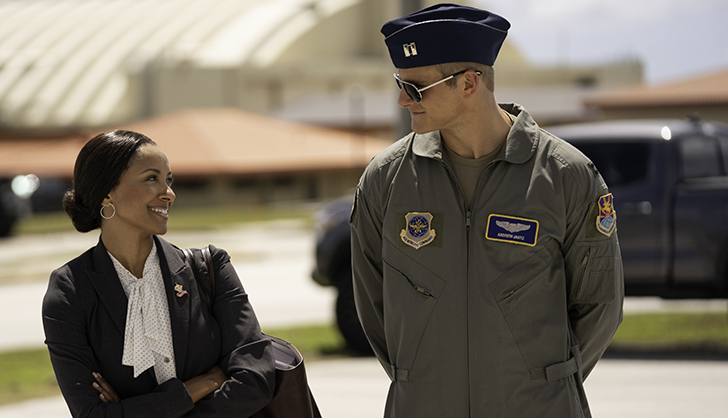 Absolutely. Operation Christmas Drop has everything we love about your typical holiday rom-com: Is it cheesy? Yes. Is it predictable? Of course. Is it the perfect distraction during these uncertain times? Bingo.

Not only did the movie capture our attention for one hour and 36 minutes, but it also educated us about the decades-old military tradition. Although Operation Christmas Drop is seriously dramatized, everything you see/hear about the mission is pretty legit. (Fun fact: The movie was filmed at the actual Andersen Air Force Base in Guam.)

Still, it’s important to note that the comedy is lacking in some areas. In fact, the writing isn’t all that great. At one point, Erica has a full-blown conversation with a computer animated gecko that’s so far from realistic, it’s almost comical. (Key word: almost.)

However, we’re not entirely convinced that it was Netflix’s intention to make us laugh. Perhaps the goal was to raise awareness about the humanitarian mission via an overly dramatized movie? If that’s the case, then mission accomplished.

Bottom line: If you’re looking to laugh or grip the edge of your seat, Operation Christmas Drop might not be your cup of tea. But if you enjoy watching light-hearted romances, we highly recommend you add it to your streaming queue. 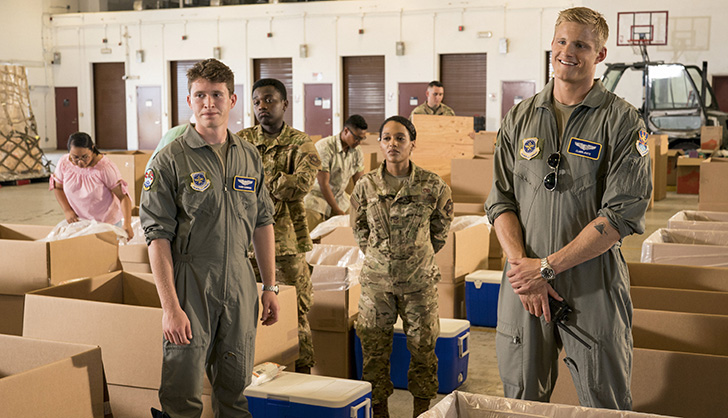 3. Who's In 'operation Christmas Drop'?

I Watched ‘Emily in Paris’ & Here’s My (Ahem, Honest) Opinion