I Watched ‘Emily in Paris’ & Here's My (Ahem, Honest) Opinion

Last night, I stayed up until 1 a.m. bingeing Netflix's new 10-episode series, Emily in Paris. The just-dropped saga is television writer-producer Darren Star's follow-up to his ’90s hit, Sex and the City. ﻿It stars Lily Collins as Emily Cooper, an ambitious marketing employee who moves to Paris for a job without friends or any grasp of the French language. In the show's first weekend of release, it's become ensnared in controversy, derision and many, many hours of enthusiastic fan viewing. Also, it televised a French pastry shaped like a penis. Here's why you may or may not need to watch this important cultural event right now. Also, full disclosure: I watched the show for la jouissance (pleasure), not in order to write this review. 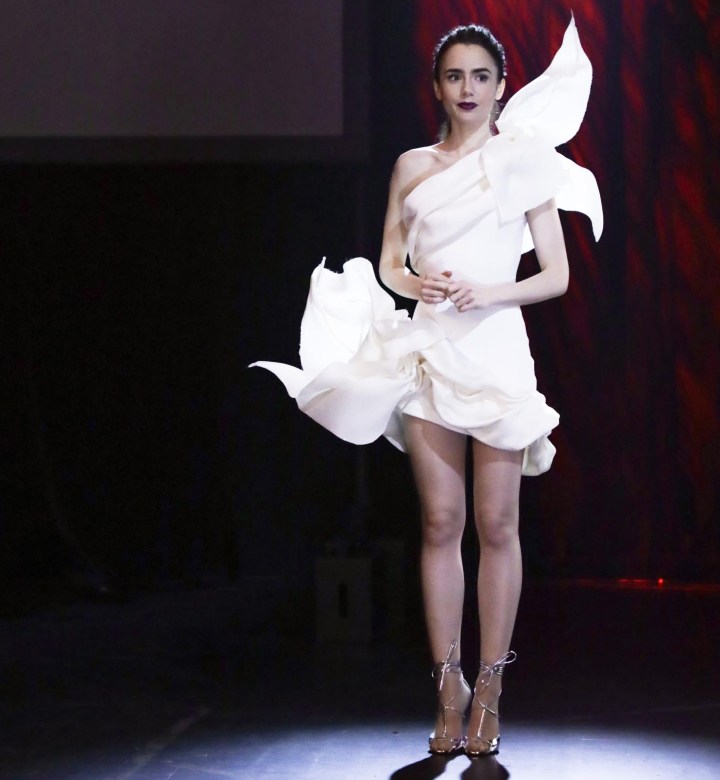 1. Thesis: We Are Rooting for Emily, our American in Paris.

Here's what the show is about—a twentysomething white woman named Emily Cooper lives in Chicago with her steady boyfriend and has a job at a marketing company where she's looking forward to a promotion because her boss, a fluent French speaker played by Kate Walsh, is moving to Paris to advise a new subsidiary of the company on business strategy. When the boss becomes pregnant, she decides to bow out of the trip, giving up on her lifelong dream of moving to Paris. Instead, she sends her junior staffer Emily. Because, sure, there are no OB-GYNs in Paris, and even though Emily speaks no French, she does post on Instagram, and that's the whole marketing deal these days, right?

Moving right along in the writer's room (the plot points throughout the series are as contrived and outlandish as haute couture), Emily lands in Paris, meets her incredibly handsome French downstairs neighbor, introduces herself at work to her snobbish white French female boss (hi, Devil Wears Prada!) and her snobbish Black gay co-worker (so inclusive!) as well as the teensy-bit-less-snobbish, white and sex-obsessed straight male co-worker. Everyone is insulted that Emily wants to pull their hidebound Euro ways into the 21st century with her hard work and social media acumen. At first, everyone pauses the action in order for Emily to wave her phone at them while she waits for her app to translate her English into French, but soon the office staff (and presumably showrunners) give up and everyone speaks in English. Pauvre Emily. Will she be able to win over these cruel people who don't recognize her inherent sweetness, love of order and zeal for a job well done?

Important note: All of the above action ensues with Emily climbing up and down five flghts of stairs to her fifth-floor chambre de bonne ﻿apartment and across scenic cobblestone streets--all while wearing five-inch heels. Her color-coordinated outfits (courtesy of SATC stylist Patricia Field) evoke a K-Pop road tour and are hyper-accessorized with matching hats (yes, including a beret), a retro phone case and a handbag charm that becomes a major plot point when a Karl Lagerfeld-esque designer sees it and calls her "basic."

2. Antithesis: Emily is a Horrorshow of the Ugly American

Hang on, I'm not talking Lily Collins's personal appearance, with her leggy figure, toothy smile and the lushest eyebrow thicket this side of Eugene Levy. The phrase refers to the type of American who travels abroad and unfairly expects international customs to be the same as they are in the United States, while at the same time remaining ignorant of local culture. For example, throughout the series we see our heroine in only two language classes, so she's not taking the entreaties of everyone she meets to parlez-vous Français very seriously. And she insists on burbling on about work in every free social moment (parties, a country weekend trip) when her French hosts have made it clear they're interested in having a life apart from work. A life in which French is spoken.

More profoundly, the show Emily ﻿has representational blind spots. The diversity of cast members is wanting, with non-whites including only the aforementioned Black gay homme and a kicky Chinese-Korean best friend. The latter is played with pizzazz by Ashley Park but is written as a photocopy of Awkwafina's sassy character in Crazy Rich Asians. Additionally, plots hinge on tone-deaf references to vaginas, and there is a confused treatment of sexually inappropriate behavior at work (we're meant to feel uncomfortable when Emily receives lingerie from a client, but amused when she jokingly gifts a penis-shaped cookie to her co-workers).

3. Synthesis: Et Voila! An Bingeable Escape for the Dumpsterfire of 2020

So, with so many inconsistencies and false notes in Emily's Parisian wild ride, why was I watching until 1 a.m.? And on a Sunday night? We all need a guilty pleasure, an escapist treat that neither edifies nor challenges. In that vein, Emily is the perfect insulin rush of programming. After rolling my eyes at the clichéd treatment of French culture in the first episode, I was ready to throw in the towel, but after my boyfriend suggested we keep watching (inscrutable gender reversal there, I know) the show had me hooked. The scenery! The gorgeously appointed interiors! That smoldering Frenchman who has little to do except be a dream sketch of a love interest. (You know, the hottie who will resist cheating on his loving girlfriend with you as long as he can, and settle for cooking mouth-watering meals for you while you make ignorant comments but mean no harm, before succumbing to your inevitable rightness.) I'm not proud of myself, Emily, for my love for the whole thing you've got going on. But with so much uncertainty and discord in the world right now, the pain points of news alerts and quarantining...how I enjoy your fantasy of innocuous conflict and unmasked air kissing—both cheeks! So if anyone is looking for mindless fun that's so unrealistic, it might as well be speculative fiction (after all, there are international travel restrictions on Americans right now), this is your calorie-rich guilty pleasure.

RELATED Who Plays Randy Zimmer in ‘Emily in Paris’? Get to Know Actor Eion Bailey