Can You Use Peppermint Oil for Hair Growth? Let’s Find Out

We chew peppermint gum on the regular, brush our teeth with peppermint toothpaste and sip peppermint tea for an upset stomach. It’s kind of a jack of all trades, but can peppermint oil also stimulate hair growth? Short answer: Maybe. From the hair benefits to the potential side effects, here’s everything you need to know about using peppermint oil for hair growth—plus six other natural oils to consider.

Want to Try an Olive Oil Hair Mask? Here Are 7 to Make at Home 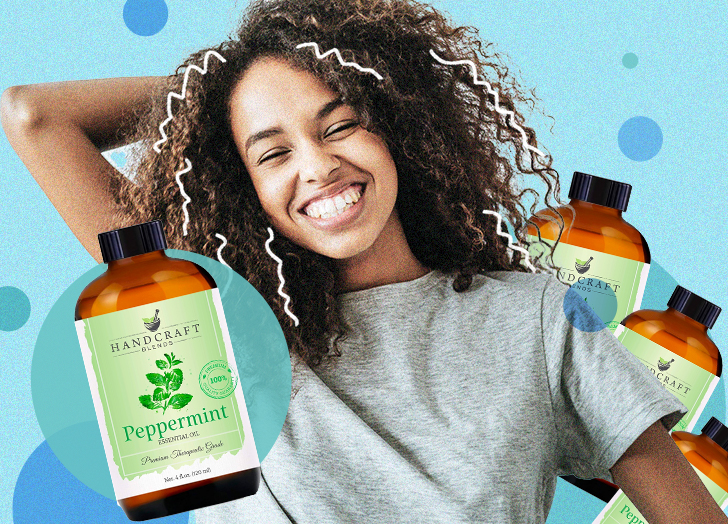 What Is Peppermint Oil?

Peppermint is an aromatic herb in the mint family. Peppermint oil can be extracted from the leaves of the peppermint plant and is used in tons of different ways. Peppermint in general is most notable for its taste, smell and cooling sensation, which are all thanks to a compound called menthol.

While there hasn’t been enough research to say whether it can aid in hair growth for sure, there have been a few promising studies. One 2014 Korean study using mice found that peppermint oil led to more hair growth than minoxidil, a hair-growth commonly known as Rogaine that’s approved by the FDA. Beyond hair growth, the oil can be beneficial if your hair is on the greasier side. Why? It can clean and clarify hair without stripping it of its natural oils, and balances your scalp's production of sebum, which leaves your hair hydrated without weighing it down.

Are There Any Side Effects?

This comes down to the type of peppermint oil you’re using. Undiluted versions (like most essential oils) can be super harsh on your skin and cause a burning sensation. If you’re working with undiluted peppermint oil, dilute it with a carrier oil like coconut oil, olive oil or avocado oil to protect your skin. Also avoid getting essential oils in your eyes, and never consume undiluted essential oils.

Our hair craves oil in order to keep it healthy and strong. Natural oils contain a combination of vitamins, fatty acids and antioxidants which help strengthen, moisturize and hydrate our hair. While there’s no guarantee that peppermint oil will aid in hair growth, the other hair benefits and relative lack of side effects mean it might be worth a try.

Does Grapeseed Oil Help with Hair Growth? (and a Few Other Things You Should Know) 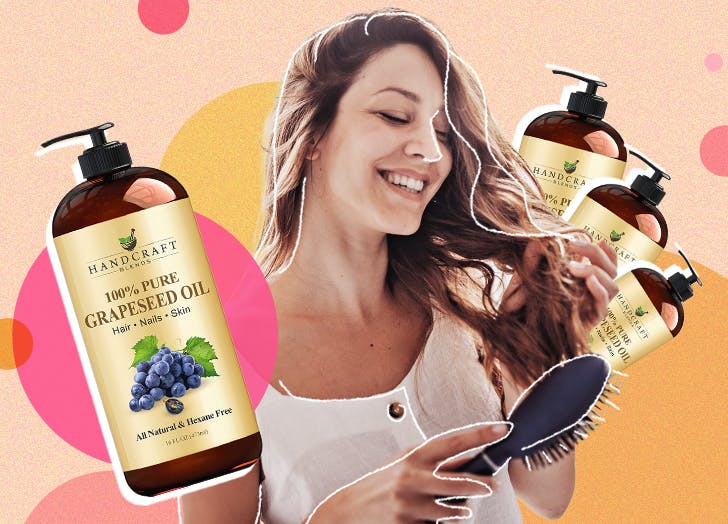 What Other Oils Can You Use in Your Hair?

Also referred to as black cumin or nigella sativa, black seed oil is thought to naturally restore hair growth in thinning areas thanks to its high concentration of thymoquinone, a powerful antihistamine. Yep, antihistamines are often prescribed to alopecia patients to help regrow hair, and get this, it’s actually an essential oil. That means it’s not thick like olive or coconut oil, and it has added therapeutic benefits. It also means that 100 percent pure, unrefined and cold-pressed black seed oil has to be diluted in another carrier oil (such as coconut or olive), because it’s too potent on its own. And when diluted, it can be used directly on the scalp to reduce inflammation, stimulate hair growth and reduce flakiness and sensitivity. However, even if you don’t have any scalp conditions, it helps to make hair healthy, soft, hydrated and shiny with consistent use. Here’s everything you need to know.

Grapeseed oil is derived from, well, grapes. It’s mostly used for wine or as a replacement for vegetable oil in cooking, but most recently it has become a staple in the beauty community. At first glance, grapeseed oil is odorless, weightless and boasts a clear finish that works for any hair type. Can it make your hair grow faster? Yes and no. A Japanese study tested this theory on mice, but there aren’t many human studies that indicate that grapeseed oil helps with hair growth. However, the components found in the oil suggest that it might be a possibility. “Grapeseed oil has the potential to aid in healthier hair overall,” says Ebony Clark-Bomani, master cosmetologist & product educator for The Mane Choice. She highlighted that the oil contains antioxidants and omega-6 fatty acids that have been shown to boost hair growth. Key ingredients like linoleic acid, polyphenols, oligomeric proanthocyanidins (aka OPCS) and vitamin E stimulate circulation, improve elasticity and repair collagen. Learn more about using grapeseed oil for hair growth here.

Because of its anti-inflammatory properties, castor oil is an excellent treatment for skin and hair that yields results for things like hair growth, skin clearness and brow thickness. And while it's often mixed into hair and skincare products, we're advocating for its use in pure form. Castor oil contains omega-6 and omega-9 fatty acids, both of which are useful for encouraging healthy hair growth. It’s also effective at treating dandruff, since it has antibacterial and antifungal properties. Rubbed into the scalp, it deeply moisturizes and helps stimulate circulation to promote hair growth.

Although there’s no scientific proof that olive oil can boost hair growth, a 2015 study showed that oils like olive, coconut or jojoba can play an important role in protecting hair from damage and reducing scalp build up. The omega-3 fatty acids and antioxidants found in olive oil in particular have been proven to help split ends, soften and strengthen hair, improve dullness and prevent breakage.
Shop olive oil: Pompeian olive oil ($15)

From removing makeup to preserving eggs, coconut oil can be adapted to do pretty much anything. So it should be no surprise that it’s the go-to natural beauty alternative, especially for hair. When your store-bought products just won’t do, try mixing up your own homemade hair mask instead to combat those issues—yes, frizz and dryness, we’re looking at you. Coconut oil’s benefits can solve just about any hair problem. Studies show that the oil has antibacterial, antifungal and antioxidant properties to treat a variety of common concerns. For example, the lauric acid found in coconut oil is a triple threat. It works to moisturize dry areas, support hair growth and reduce protein loss due to coloring, bleaching or using heat tools overtime. Aside from the fatty acids, the oil is rich in vitamins to help smooth, nourish and get rid of excess oil in your hair.

Like many other essential oils, tea tree has been used for medicinal purposes in the Eastern world for hundreds of years. Also known as melaleuca oil, it was originally used by the aboriginal people of Australia who derived it from the leaves of the (quite pretty) flowering Australian tea tree via steaming, according to the Mayo Clinic. But you probably know it as that intriguing, trendy ingredient popping up in all of your favorite hair care products. While the Mayo Clinic points out that tea tree oil may be effective at treating acne, relieving symptoms of athlete’s foot and getting rid of lice (yikes), we’re here for its more general, everyday hair care benefits. “Its main property is that [tea tree oil] effectively helps to fight bacteria and fungus,” says Dr. Jenelle Kim, an expert in Chinese medicine and the founder and formulator of JBK Wellness Labs in San Diego. “It is a strong, natural ingredient that is great for sensitive skin and scalp. The scalp is very sensitive and is vulnerable to skin imbalances, itchiness and dandruff—which are usually caused by minor fungal infections.”

The Best Hair Oils for Every Hair Type

beauty
Sponsored
TikTokers Can’t Stop Talking About This Gift for the Holidays
beauty
by Chelsea Candelario
TikTok Fact Check: Can You Really Use Dandruff Shampoo to Clear Acne?
beauty
by Chelsea Candelario
The Stylists Have Spoken: Winter Gold Is *The* Hair Color of 2023
beauty
by Nakeisha Campbell
22 Holiday Party Hairstyles That’ll Make You Stand Out From the Crowd
beauty
by Jenny Jin
The Top 2 Trending Hairstyles for 2023 Are Actually Super Easy to Recreate at Home 
beauty
by Jenny Jin
The 13 Best Conditioners for Thin Hair That Won’t Weigh It Down