The Best Teas for an Upset Stomach, from Ginger to Licorice

Whether you ate one too many scoops of ice cream or you’re a few days out from starting your period, your stomach is hurting. Or maybe it’s just cramps? Instead of waiting for the pain to pass on its own (or reaching inside your medicine cabinet), consider brewing one of these six teas, all of which are scientifically proven to soothe an upset stomach. 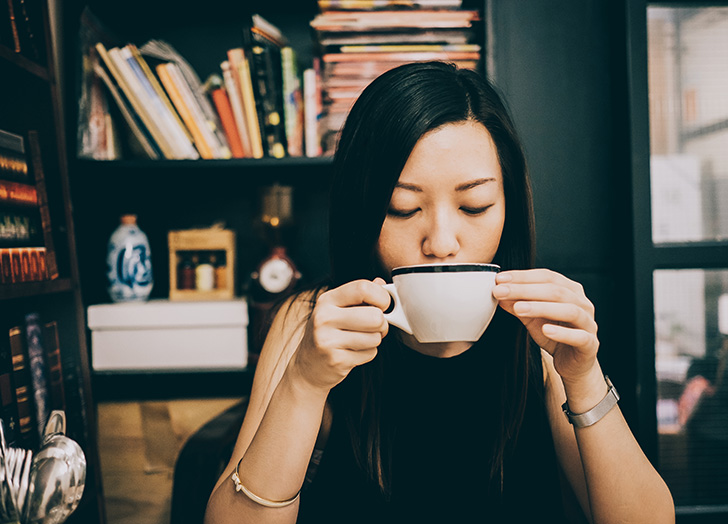 Ginger root has been used medicinally for thousands of years in Asia and India to help relieve upset stomach, indigestion, motion sickness and nausea. Per a review of clinical trials in the journal Food Science & Nutrition, ginger can reduce gas, bloating, cramps and indigestion while also supporting bowel regularity. Why? It largely comes down to gingerol, ginger’s main component, which may increase digestive responsiveness. You can, of course, buy premade ginger tea, or you can make your own by grating a knob of peeled ginger and steeping it in boiling water for 10 to 20 minutes before straining.

While most peppermint-related studies focus on peppermint oil, it’s widely believed that the same benefits can be reaped from peppermint tea. The minty leaves, which contain the essential oils menthol, menthone and limonene, are used medicinally for nausea, menstrual cramps, abdominal gas and bloating. A review of 14 studies dealing with 1,927 people suggested that peppermint oil reduced the duration, frequency and severity of stomach pain in children. To make it at home, steep crushed peppermint leaves in hot water for seven to 12 minutes.

Fennel is a flavorful culinary herb that’s a rich source of protein, dietary fiber, B vitamins and several dietary minerals. In tea form (fennel seeds combined with hot water), the seeds extract an antibacterial component that helps relax your digestive muscles and relieve constipation. In a study of 80 women published in the Journal of Pediatric and Adolescent Gynecology, taking a fennel supplement for several days before and during menstruation decreased symptoms—including nausea.

Green tea is a health superfood. It’s packed with flavonoids that can help reduce inflammation, it aids in lowering bad cholesterol and it can lessen your chances of heart attack or stroke, according to researchers at Harvard Medical School. It’s also a great source of polyphenols, which studies have shown can help fight cancer, and it might even help you lose weight thanks to its fat-burning and metabolism-boosting abilities. In terms of soothing an upset stomach, one small study at Isfahan University of Medical Sciences in Iran noted that green tea significantly reduced the frequency and severity of diarrhea caused by radiation therapy. Just be careful about drinking it before bed; even though it doesn’t have as much caffeine as black tea or coffee, it could keep you up at night.

Like ginger, licorice root has been used in holistic medicine for centuries. It contains glycyrrhizic acid, an anti-inflammatory component that’s not only good for the immune system, but also could help to relieve a number of stomach problems, like ulcers, indigestion and heartburn. Additional research is required to solidify licorice tea, specifically, as a stomach soother, but studies—like this one by researchers in Bangalore, India—have shown that taking 75 milligrams of licorice extract twice daily significantly decreased indigestion.

A cup of chamomile has been one of our nighttime rituals for a while, but did you know it can also help soothe an upset stomach? Chamomile contains flavonoids—naturally occurring plant pigments that are present in many nutritious fruits and veggies. Foods with flavonoids have a host of health benefits, including the potential to reduce risk of heart disease, cancer and stroke, according to promising research. A study out of Case Western Reserve University in Ohio found that chamomile is a valuable digestive relaxant and has been used to treat various gastrointestinal disturbances like flatulence, indigestion, diarrhea, motion sickness, nausea and vomiting. Chamomile tea bags are sold at grocery stores, health food stores and drugstores and can also be purchased online. You can also make chamomile tea by soaking the dried flowers (also available online and at health food stores) directly in hot water. 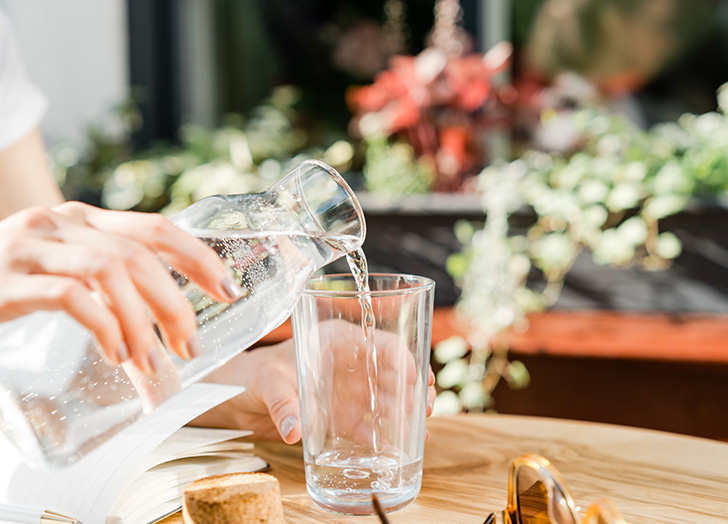 Whether or not you ditch the lemon water after that first cup, stick to H2O throughout the day. Water prevents common causes of bloating like constipation and dehydration and doesn’t contain any stomach-expanding ingredients like sweeteners and carbonation that are present in other drinks like soda (yes, even diet) and seltzer.

Lactose sensitivity is way more common than you probably think, even if you possibly have the mildest case. Many people experience some form of negative side effects (most often gas and bloating) after milk, cheese or yogurt. We’re not saying cut these out for good, but ahead of a big event, steer clear of dairy just to be safe, since you never really know how your body is going to react.

When you eat too quickly, you swallow more air, which can cause bloat. Chew slower and more mindfully and maybe skip the after-lunch gum (which has a similar effect), while you’re at it.

Before a big night out, consider a quick yoga sequence aimed at increasing blood flow to your digestive tract and ridding your internal organs of constipation-causing toxins. Also consider an abdominal massage, which increases blood flow and soothes your muscles (and also works wonders on period cramps).

15 Foods to Eat for a Flatter Stomach