What Is Castile Soap and What Are Its Benefits? 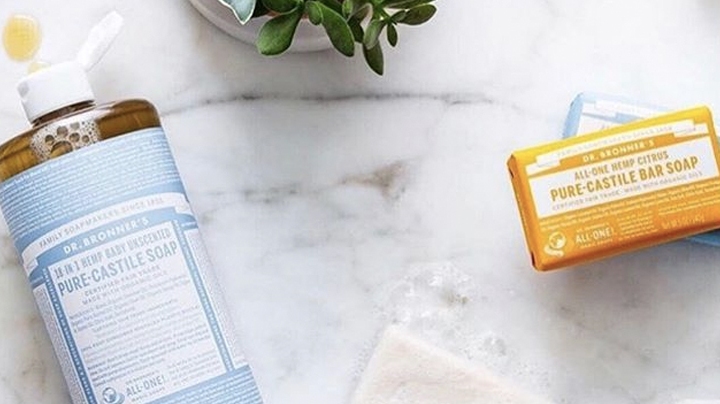 Castile soap just might be the greatest multipurpose product out there. One bottle of the stuff can replace your body wash, laundry detergent, dish soap, shaving cream and countertop cleaner, to name a few things. But before we get into all of its varied uses, let’s discuss what it is and how it became the popular household item that it is today.

What Is Castile Soap?

Vegetarians and vegans, rejoice: One of castile soap’s distinguishing traits is that it’s made purely of vegetable fat, rather than animal fat like tallow, or other animal byproducts like goat’s milk (as is common for most other soaps). It was initially made with olive oil from Spain’s Castile region—hence, the name. Since then, castile soap has expanded to include a mix of vegetable oils like coconut, walnut, castor, hemp and avocado oil.

In addition to being animal-friendly, it’s also an environmentally conscious choice, as the soap itself is completely biodegradable. And, given its aforementioned versatility, one bottle of castile soap can replace many different products in your home, which decreases your overall plastic consumption.

What Are The Benefits Of Using Castile Soap?

Castile soap is unique in that it’s both gentle and strong; it’s gentle on skin because it’s made from saponified oils that have hydrating properties, but it’s an equally powerful cleanser that can tackle even the most stubborn grime.

Combine it with a few other ingredients—like essential oils or distilled water—and you can easily customize any number of cleansing products for use in your daily life.

How Is Castile Soap Used?

From our research, we’ve found no fewer than 25 uses for castile soap, but rather than list out every single one, we narrowed the list down to the seven we’ve actually tried (with great success) throughout the years:

1. Body wash: Far and away, our favorite way to use castile soap is in place of our body wash. A few drops on wet skin will produce a satisfyingly soapy lather that makes your skin feel super clean, but somehow not stripped dry.

2. Shaving cream: Our partner has been using castile soap in place of his shaving cream for years and swears he gets a closer shave because of it. (Note: We’ve taken to mixing castile soap with coconut oil to create more slip for when we’re shaving our legs; the coconut oil also adds moisture, which is particularly welcome during the drier winter months.)

3. Makeup brush cleanser: Castile soap—especially in bar form—is a great way to clean your makeup brushes. Just swirl the bristles over the bar for 20 to 30 seconds and rinse thoroughly to remove any residual makeup. And if you have liquid castile soap rather than a bar, just add a couple drops to a half-filled cup of water and swish the brushes around before rinsing the bristles clean.

4. Dish soap: To wash your dishes with castile soap, use roughly one part soap to ten parts water to get the perfect amount of suds in your sink. You’ll get sparkling clean dishes without drying out your hands.

5. Laundry detergent: For freshly laundered sheets and clothes, pour 1/3 to 1/2 cup of castile soap (pending the size of your load) into the detergent compartment of your washing machine. We’d recommend a lavender-scented castile soap here.

6. Pet shampoo: Use it to give your furry friend a bath. A few pumps of castile soap on a wet coat will produce a fluffy lather that rivals any fancy dog or cat shampoo.

7. All-purpose cleaner: To concoct an all-purpose cleaner, simply add ¼ cup of castile soap to two cups of water; option to add 10 to 15 drops of your favorite essential oil to scent your solution. We’re partial to a citrus for kitchen and bathroom cleaning and lavender or rose for bedrooms. Pour the solution into a spray bottle and give it a good shake before each use.

What Are The Best Castile Soap Products?

When buying castile soap, the most important thing to look for is that it’s 100 percent natural or pure castile soap from a reputable brand. There are some brands that add chemicals and hidden ingredients like sulfates, triclosan and artificial fragrance to their formulas.

The easiest way to tell if you’re getting the real thing is to look at the ingredients label. To save you the additional hassle, here are three of our favorite castile soaps that definitely pass the test:

How to Make Foaming Hand Soap in Just 5 Steps

beauty
by Chelsea Candelario
A French Beauty Expert Shares Her Top Skincare Tips for Getting a Parisian Glow
beauty
by Jenny Jin
"Ma'am," "Anti-Aging" and Other Words That Bother Me
beauty
by Greta Heggeness
We Compared This Viral Color Correcting Treatment with a $13 Dupe
beauty
by Jenny Jin
We Ask a Chemist: What Percentage Vitamin C Serum Is Best?
beauty
by Chelsea Candelario
7 Haircut Trends Happening in New York Right Now
beauty
by Catrina Yohay
I Tried the Jolie Filtered Showerhead for 3 Months and My Hair Is Shinier Than Ever