Wine During Pregnancy: Is It OK If I Have Just a Little? 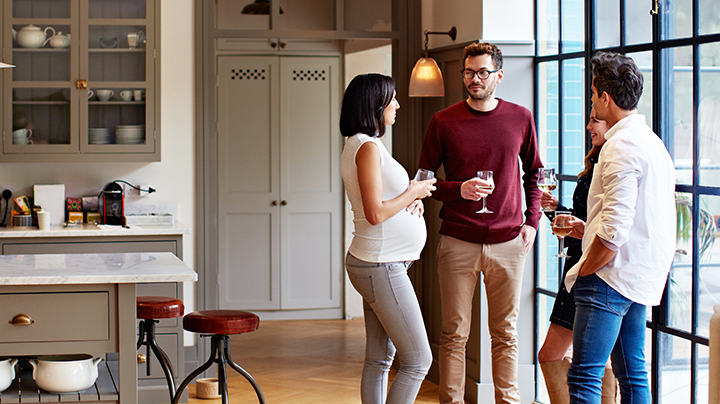 You’ve stopped eating hot dogs and sushi, you’re limiting your caffeine intake, you’re trying to do everything right—but so much information out there about what to eat and drink when you’re pregnant feels conflicting. Want proof? Simply poll your mom, your grandma and three friends—there’s a good chance they’ll all have different answers, especially when it comes to a big one: Is drinking wine during pregnancy—even just a little bit—OK? The answer is no and we know that may not be what you were hoping to hear, but after talking to medical professionals and consulting studies, here’s why we say it’s best avoided.

1. Consider the Risks of Drinking While Pregnant

While it’s up for debate whether a few sips of wine—or even a glass—is enough to cause harm to a fetus, there’s no doubt that excessive drinking will harm an unborn child. That’s because alcohol passes through the walls of the placenta, increasing the risk of fetal alcohol spectrum disorders (FASDs)—a group of lifelong physical, behavioral and intellectual disabilities. According to the American Pregnancy Association, children with FASDs may have a smaller head size, low body weight, poor coordination, poor memory as well as speech and language delays, among other characteristics. The more alcohol a mother drinks, the greater the risk that the baby will develop FASDs.

The trickiest part is that more research is needed surrounding how much alcohol poses a danger to the baby or when in the pregnancy the baby is most likely to be harmed. Some reports suggest that a little alcohol, early on, might not be as risky as we’ve believed. Harvard Health Publishing shares that a 2012 Danish study found that low to moderate alcohol consumption during pregnancy didn’t affect cognitive functioning among kids, while a 5,628-person study found that rates of premature birth and pre-eclampsia were similar across all levels of alcohol consumption.

Still, given the risks involved, most medical professionals have settled on a no-alcohol-during-pregnancy blanket rule. According to the American Academy of Pediatrics and the American College of Obstetricians and Gynecologists, no amount of wine is considered safe to drink during pregnancy. Because there is no way to determine exactly how much alcohol could be detrimental to each individual woman, and at what time during the pregnancy, these groups make an across-the-board recommendation to avoid alcohol altogether. Better to be safe than sorry.

2. Here's What the Doctors Have to Say About It

Most OB/GYNs in the U.S. follow the guidelines of the American College of Obstetricians and Gynecologists, so they will tell you that it’s safest not to drink wine during pregnancy. However, at a prenatal appointment, your doctor might indicate that an occasional glass of wine is perfectly OK, as long as you’re not drinking to excess.

“When I asked my doctor about whether or not I could drink some alcohol during pregnancy, his response was ‘Women in Europe do it,’” a New York City woman with a healthy, 5-month-old baby told us. “And then he shrugged.”

That said, after polling a handful of doctors, we weren’t able to find one who would say, on the record, that the occasional glass of wine is fine for pregnant women, regardless of what they might tell their patients. And actually, this makes complete sense: While a doctor might tell one healthy patient with no history of birth complications that it’s OK to have a small glass of wine once a week with dinner, she might not be comfortable making this recommendation across the board for all of her patients (or, in this case, every pregnant woman on the internet).

3. Here's What the (Limited) Research Tells Us

Here’s the interesting thing: There aren’t a ton of studies published about pregnant women and alcohol, because that would require scientists to run tests on pregnant women. Because this task is deemed risky for moms and babies, it’s safer to tell pregnant women to abstain.

One recent study conducted by University of Bristol health epidemiologist Luisa Zuccolo, Ph.D., found that consuming two to three drinks a week increased the risk of preterm birth by 10 percent. But because this study was limited, Zuccolo says that more research needs to be conducted on this topic.

4. Here's What Other Moms Say

According to data collected by the CDC, 90 percent of pregnant women in the U.S. abstain from alcohol (or at least they say they do on the record). In Europe, on the other hand, drinking during pregnancy is far more acceptable. This Italian pregnancy pamphlet, for example, states that 50 to 60 percent of Italian women drink alcoholic beverages during pregnancy.

Remember the aforementioned New York City mom with the healthy 5-month-old? After talking to her doctor, friends and family, she ultimately decided to imbibe. “Being from Europe, I did a quick poll of some of my friends across the pond and most of them confirmed what my doctor said,” she explained. “My grandma even told me that she had a glass of cognac every night while pregnant with my dad! Now, I didn’t go quite that far, but after the first trimester, I did have the occasional small glass of wine with dinner— maybe one or two per month. I also had occasional sips of whatever my husband was drinking. It was such a minimal amount that I didn’t really worry about it. But I was really excited about having a giant glass of wine once contractions started—something both my doula (who was a midwife) and our prenatal class teacher had told me was not only fine to do but recommended because it relaxes you. I ended up going into labor at 1 a.m., so a glass of pinot wasn’t exactly the first thing on my mind.”

Another woman we spoke to, the mom of a healthy 3-month-old, decided it was better to be safe than sorry after doing her own research. “I had a miscarriage, so when I got pregnant again, I was terrified I would do something to jeopardize the health of my baby, even if the risks were very small,” she said. “I didn’t eat one piece of sushi or have one runny egg, and I didn’t drink a single glass of wine either.”

If you have trouble drinking in moderation, it’s easier to stay away from alcohol altogether. “I have a bit of an addictive personality,” another mom told us. “So going cold turkey was actually really great for me. I didn’t think about wine once during my pregnancy.”

16 Things You Should Never, Ever Say to a Pregnant Woman