20 Women on Their Weird Pregnancy Cravings 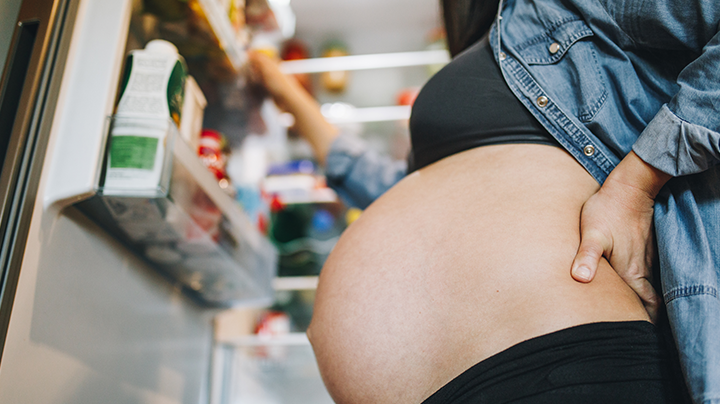 You’ve hated mashed potatoes for as long as you can remember. But now that you’re pregnant, you’re eating them for breakfast. With hot sauce. And sour cream. What the heck is causing these weird cravings? The jury’s still out, and experts aren’t exactly sure whether it’s hormones or a lacking nutrient that causes cravings. Either way, it’s totally OK to indulge once in a while…as long as your craving is actually, um, food.

Some pregnant women crave extra-weird, non-food items, like soil, clay or paper, and this is likely the sign of a nutritional deficiency. “Doctors use the term ‘pica’ to describe craving and chewing substances that have no nutritional value,” says the Mayo Clinic. “Craving and chewing ice (pagophagia) is often associated with iron deficiency, with or without anemia, although the reason is unclear.” So, if you’re craving dirt for dinner, talk to your doc. But if you’re craving watermelon, by all means, indulge.

We polled 20 real women about their pregnancy cravings, from the fairly common (peanut butter) to the super weird (…cigarette butts?).

“Pierogies and only pierogies. Of course, I used pregnancy as an excuse to eat everything and anything I wanted anyway. It was a hot summer and there was ice cream almost every day, but that may have been more about my general love of ice cream than about specific pregnancy cravings.” – Anna H.

“So this is pretty weird. I wanted to chew on cigarette butts. Not the actual cigarette, just the squishy end that’s usually been in someone’s mouth. I never did it, thank God, but I really wanted to. Apparently, I had a form of pica that stems from iron deficiency. I opted for crunching on ice chips, which was much safer and less disgusting.” – Alexandra T.

3. Peanut Butter in All Forms

“Peanut butter...in any form. Cups, Pieces, pie, icing, right out of the jar...whatever! I swear my son loves peanut butter so much because he had it in the womb pretty much every day.” – Melissa G.

4. Something Cold and Crunchy

“Ice. I just wanted to chomp on crushed ice. I later found out that can be a sign of anemia—and then found out I was quite anemic.” – Jessie B.

5. Meat That You Eat With Your Hands

“This is vaguely embarrassing, but when I was pregnant with my first child, all I wanted was chicken wings. I wanted them saucy and spicy, and I wanted to eat them with my bare hands. Actually, now that I think about it, my son does love chicken wings now so clearly, it had an effect on him!” – Jillian Q.

“Anything sour and tangy. I really wanted a margarita, but obviously, that was impossible, so I mostly stuck with sour gummy worms. Also, lots of queso and guacamole. Maybe my body was telling me to get more protein? Who knows. The heart wants what the heart wants.” – Rachel S.

“I'm a dietitian, so pretty good at making sure I was getting what we both needed. However, there was a two-week stretch in my first tri where I ate cantaloupe like it was going out of style, likely because I needed the vitamin C (and this is a fruit I don't often gravitate towards). In the third trimester, I wanted to drink milk, not something I do much as an adult, and this made sense since the third trimester is when the baby's bones are heavily mineralizing.”- Rachel C.

8. Ice Cream with a Twist

“I'm usually not a big carnivore but all I wanted was meat! Spaghetti Bolognese (with a side of meatballs), In-N-Out burgers (every day—my office was across the street and the nice people behind the counter knew my order) and, maybe the strangest of all, vanilla ice cream with beef jerky bits on top (on a day I was desperate and that was the only meat I had around!). The last one turned out to be a weirdly delicious combo of salty/sweet, though I tried it once when I was NOT pregnant and realized that pairing was only something that pregnancy could bring about.” – Mae K.

9. Hot Sauce (But Only from Taco Bell)

“I craved Taco Bell (along with other ‘spicy’ foods) ALL the time. Anytime we discussed lunch or dinner options, Taco Bell was always the first thing I thought of. Fire Sauce was the key, not Mild, Hot or Diablo, it had to be Fire. Sometime during the second trimester, we devoted an entire drawer in the kitchen to Fire Sauce packets just so we'd always have it on hand. Taco Bell got me through the pregnancy. Just kidding…sorta.” - Rachel A.

11 Pregnancy Stretches for Pain, Stress Relief and Just Feeling Like Yourself Again

10. Turkey from the Deli Guy

“I wanted turkey, but straight Boar’s Head deli meat, not roasted (which you’re supposed to cut down on while pregnant because of listeria). I didn’t give in, and it was torture. I also had to have a mini tortilla with American cheese before I went to bed every night. (Which, by the way, helped so much with nausea.)” - Dabee K.

11. Watermelon, and Not the Pre-Sliced Kind

“All I ate was watermelon. Three whole watermelons a week. Sometimes when my husband wasn’t home and all I wanted was watermelon, I went to the store and lugged them home myself. On the weekends, I would drag him to the farmers market to carry them for me. When my baby was born, I tried to give her watermelon and she made the funniest ‘not interested’ face.” – Alana C.

“I could only drink very cold Essentia water. Everything else made me nauseous. And I ate a whole package of (nitrate-free) bacon in my first trimester in one sitting. I lived off of mixed berries, scrambled eggs and chocolate. All I wanted though was an Italian sub, a beer and a bagel with nova for nine months. I ate Italian subs for a full week after giving birth.” – Vanessa V.

“When I was pregnant, especially in the first trimester, I had crazy cravings for grapefruit and lemons. As in, I would actually quarter the lemons and bite into them like they were orange slices. The tartness didn't bother me much at the time and it became part of my breakfast routine before work: A grapefruit followed by lemon slices. The irony is that my now 16-month-old won't try either.” – Rachel B.

14. Tomato (Despite Hating Them Prior)

“Mango EVERYTHING. Frozen, dried, fresh, juiced...I can't get enough. I'm worried my baby is going to come out orange because I've eaten some form of mango every single day for the last nine months. Secondly, I've always been averse to tomatoes and only able to eat them if they're in a sauce (and even then... it has to be super smooth—no chunks). But pregnant me is obsessed with whole roasted tomatoes. I'm not ready to bite into a raw one just yet, but this is a huge step up for me and one I hope lasts post-pregnancy. I'm assuming that my body is super vitamin C deficient or something, because both of these cravings have been out of control.” – Alexia D.

“My first trimester I ate only peanut butter and jelly on white bread. Second and third trimester, I ate two apples and Skippy creamy peanut butter every day. I tried to give our baby peanut butter right away, and he didn't love it. Then again, it was the unsalted and unsweetened kind, so really, who would?” – Jamia P.

“I ate boxes and boxes of cereal every single night. First, it was Lucky Charms, and then I got on a Kix kick. I had to go to a ton of grocery stores because not everyone carries it. I was so obsessed, my co-worker bought me cereal for Christmas!” – Katie L.

“All I wanted was beer. I even tried non-alcoholic to see if that would curb my craving, but no go. Finally, at 39 weeks in August, in 100-degree weather, I had a Peroni while at dinner at our favorite Italian restaurant in Brooklyn. The waiter was hesitant to give it to me, but I think the look in my eyes told him he wouldn’t make it out alive if he didn’t.” – Catesby C.

18. Watermelon with a Hint of Pickle Juice

“My momma loved watermelon dipped in pickle juice while pregnant with me, and dipping burgers in ice cream when she was pregnant with my little sister. If it didn't have a salty and sweet factor in the meal, she did not want it.” – Liv K.

“I craved McDonald’s French fries and I ate them religiously throughout my entire pregnancy. At one point I realized I liked them way better after I let them cool all the way down.” – Emily M.

“I craved pineapple both times, and that's not really weird in and of itself, but the quantity I wanted to eat was crazy. I swear I could've finished one of those Whole Foods family containers in a sitting if I didn't think about how much it cost me in the first place.” – Ali G.

8 of the Best Pregnancy Pillows for a Good Night’s Sleep, According to Real Moms