Sushi for Beginners: Everything You Need to Know Before Ordering

You’ve wanted to try sushi for a long time. But between the menu, the chopsticks and the raw fish, you’re a little intimidated. You’re definitely not alone—but with this guide to sushi for beginners, you’ll learn basic terminology, how to eat sushi properly, sushi etiquette and the best rolls for first-timers to sink their teeth into.

How to Make Your Own Sushi at Home

You may think of over-the-top rolls and slivers of raw fish, but the term “sushi” doesn’t always imply fish at all. Sushi is actually a Japanese term for rolls or balls of seasoned sushi rice (made with rice vinegar) that are often garnished with vegetables, egg or fish. This is why so many sushi chefs (itamae) believe rice is actually the most important ingredient. When we spoke to Chef Yuki Chidui, owner and chef at Japan’s first women-run sushi restaurant Nadeshico Sushi, she said it’s all about fluffy, melt-in-your mouth grains. While maki rolls are likely what come to mind at the first mention of sushi, there are actually five main types. We’ll get into those next. 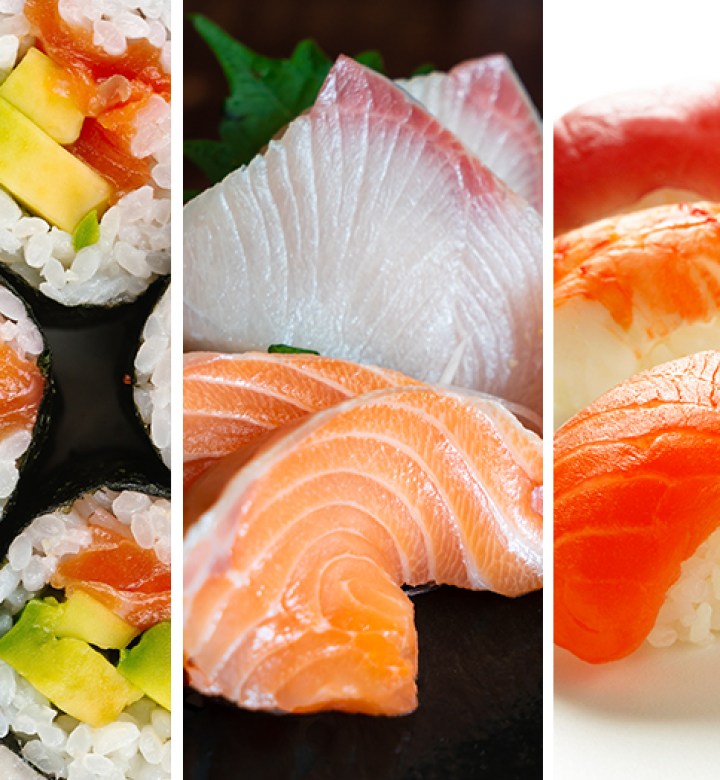 The five main types of sushi:

Rice and filling wrapped in seaweed, aka the rolls you’re likely most familiar with. There are different types of maki based on how many ingredients are in the roll or the roll’s size, like hosomaki (one-ingredient maki) and futomaki (thick maki). Popular fillings include raw fish, cooked shellfish, avocado, cucumber and roe (fish eggs). Traditionally, it’s eaten by hand, but most Americans eat it with chopsticks. Either method is acceptable at a restaurant.

Small mounds of rice topped with a dab of wasabi and various ingredients (usually raw fish). “Nigiri” translates to “grip,” which reflects how the rice mounds are measured and shaped by hand. It’s the most traditional style and is served in twos. It’s typically eaten in one bite with chopsticks. If you want to dip it in soy sauce first, avoid dunking the rice and dip the fish side instead.

Thin-sliced raw fish. Sashimi technically isn’t sushi at all, since it isn’t made with seasoned rice, but it’s nearly always on the menu at sushi restaurants. The fish is sushi-grade, meaning it’s high-quality enough to be eaten raw. Each piece of sashimi should be eaten in one bite with chopsticks.

Rice and filling wrapped in seaweed, but in a cone-shaped roll. Also called hand rolls, temaki don’t require chopsticks to be consumed.

Just like maki, but with rice on the outside of the seaweed instead of inside. This style is typical in America because the seaweed is somewhat “hidden” under the rice. It’s often garnished with sesame seeds or roe for crunch.

Green tea. This hot beverage is prime for pairing with sushi because it cleanses the palate, though it’s traditionally consumed after a meal since it’s great for digestion.

Pickled ginger. It’s not meant to be eaten with the sushi, but rather between different types of fish as a refreshing palate cleanser.

Dried seaweed sheets used to roll or hold sushi fillings. It adds saltiness and natural umami to the overall flavor of the sushi. Chidui stresses that high-quality nori can make sushi that much more delicious.

An alcoholic beverage made from fermented rice. It’s often served warm but can also be enjoyed chilled. Traditionally, sake is only sipped before the meal and not with rice; but plenty of sushi lovers pair them nowadays. Sake is also the word for salmon (though sake and salmon are pronounced differently in Japanese).

Soy sauce. Etiquette tip: Never fill your soy sauce dish to the brim, as it’s insulting to the chef. Pour just a little into the dish and use it sparingly. It’s also wise to always dip your sushi fish-side in, since the rice can soak up a ton in an instant and make the sushi too salty.

Fried egg. It’s slightly sweet and often saved for the end of the meal.

A Japanese dish made up of battered, deep-fried seafood, meat or veggies. While you can often order a miscellaneous mix of fried goodies to nosh on at a Japanese restaurant (you may find it included in a bento box meal), tempura sushi is different. It can mean the seafood inside the roll is battered and fried, or that the entire roll is fried to crispy perfection.

Flying fish roe. The eggs are often used as a garnish on ornate sushi rolls.

Japanese horseradish paste. While most sushi in America comes with a mound of wasabi for spreading or mixing into your soy sauce dish, it’s traditionally a bit of a faux pas to use it. The idea is that the chef crafts each piece with a specific flavor profile in mind, which wasabi can disrupt or overpower. But hey—to each their own. After all, the majority of American wasabi isn’t actually wasabi in the first place, but a mix of horseradish, hot mustard and green dye (!!!).

The Best Rolls For Sushi Beginners To Order

If you’ve never eaten raw fish, start with uramaki or maki. These rolls—many of them Americanized—will likely already fit what your palate is used to, plus make the transition to more traditional sushi like nigiri and sashimi easier. Here are a few rolls that are just right for first-timers. 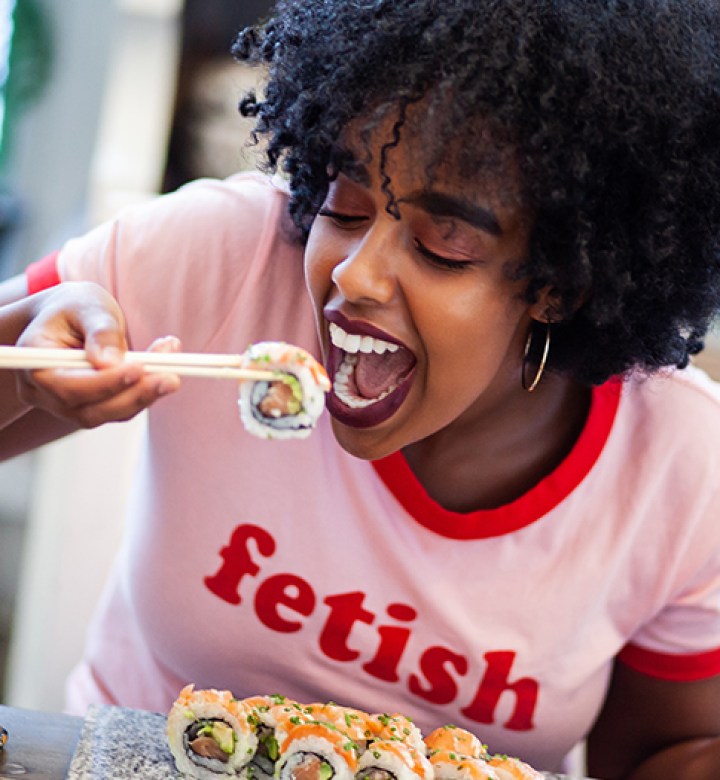 How To Eat Sushi

Now that you know what to order, it’s time to eat. But is there a *right* way to eat sushi? Here’s a step-by-step guide—complete with etiquette tips—to refer to when you hit the restaurant.

8 Things a Real Sushi Lover Would Never Do