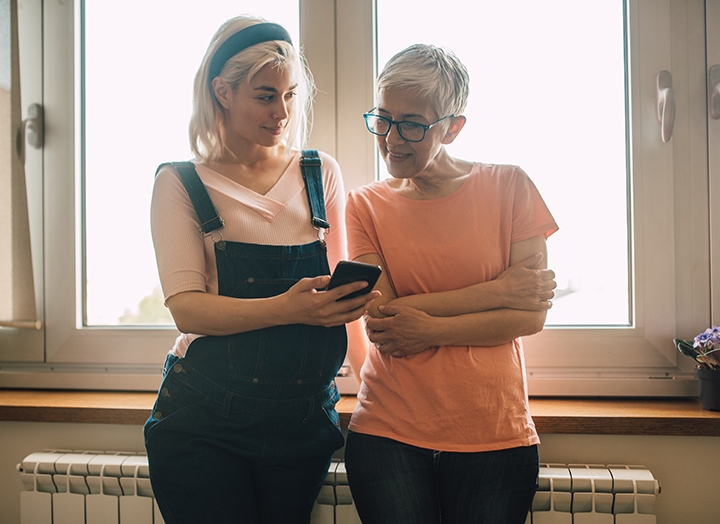 Millennials and boomers may share some of the same hobbies and travel preferences, but when it comes to pregnancy habits, these two generations couldn’t be more different. From finding out the gender to hiring postpartum help, here are four millennial pregnancy trends that boomers just don’t get.

From tracking baby’s size each week and scouring reviews for the best car seat to pinning nursery ideas on Pinterest and joining community forums, millennial moms-to-be rely heavily on technology to see them through those nine months (and beyond). Their boomer parents, on the other hand, didn’t have nearly the same amount of information at their fingertips and so, well, they did things differently. “When I told my mom about a tip I saw online that you can put cold cabbage leaves on your boobs to help stop your milk supply, she rolled her eyes at me and sighed ‘Your generation!’” mom-to-be Sarah tells us. “She told me that she just wore a sports bra in the shower for a few days and that was it—she thinks it’s really funny how much our generation has to research everything beforehand as opposed to just winging it like they did.”

2. They get A LOT of tests and scans done

“My mother was shocked by the number of tests and sonograms I had,” millennial mom-of-two Jill tells us. “She was like ‘I never once saw a picture of you before you were born, and you turned out fine!’ And, well, grandma has a point. While boomers may have received one or two scans in their pregnancy (or none at all), the Wall Street Journal reported that in 2014, usage in the U.S. of the most common fetal-ultrasound procedures averaged 5.2 per delivery, up 92 percent from 2004. (Some women even report getting scans at every doctor visit during pregnancy!)

While having multiple ultrasound examinations during pregnancy is unlikely to cause any lasting harm to the developing fetus, some experts say that frequent fetal scans in low-risk pregnancies aren’t medically justified. Per the American College of Obstetricians and Gynecologists, it is recommended that ultrasound exams be performed only for medical reasons by qualified health care professionals. “Casual use of ultrasound during pregnancy should be avoided,” they report. So, what’s the problem with having multiple scans? It could freak the mom out. “For some mothers, having multiple ultrasounds instills fears about their pregnancy: the baby looks too big, the baby looks too small, the baby has the cord around its neck (actually a normal finding),” Dr. Allison Hill, OB-GYN, told Romper. “Or maybe there was just ‘limited visualization,’ meaning some of the organs couldn’t be evaluated completely because of the size or position of the baby. In the mom’s mind, these results translate to ‘there may be a problem,” she adds. And pregnant ladies simply don’t need that extra stress. Maybe mother boomer knows best?

According to recent data from YouGov Omnibus, roughly two thirds of millennials surveyed said that they would be interested in learning their baby’s gender before it was born, compared to just 46 percent of baby boomers. While the technology existed for many boomers to find out the gender of their baby back when they were pregnant, it simply wasn’t as commonplace as it is now. This generation gap was even more pronounced when it came to gender reveal parties, with 31 percent of 18 to 34 year olds surveyed saying that gender reveal parties were “fun,” while only 21 percent of boomers agreed. Additionally, 26 percent of millennials called these events “joyous” compared to just 16 percent of boomers.

4. They use doulas and night nannies

“My mother-in-law could not understand why we wanted to enlist the help of a postpartum doula,” mom of two-year-old Sam tells us. “I tried explaining to her that with a scheduled C-section and a partner who would be going back to work shortly after delivery, I needed an extra set of hands, but I think she just thought we were crazy to pay someone so much money.” While the idea of a postpartum doula isn’t exactly new, chances are that boomers had a family member, friend or neighbor play a similar role in their postpartum period (for free!). They say it takes a village to raise a child, but with many millennials living away from their parents and in urban areas (I think my neighbor’s name is Steve?), the village is more of a hamlet (if that). According to a report by KinderCare learning centers, 70 percent of parents feel that they are expected to do it all without fundamental support systems, and the same number (70 percent) agree that it is harder to raise a child today than a decade ago. So perhaps it’s no wonder that millennials are resorting to doulas, night nannies and postpartum doulas to help ease the transition from pregnancy to parenthood.