Is the Wedding Hashtag Over? 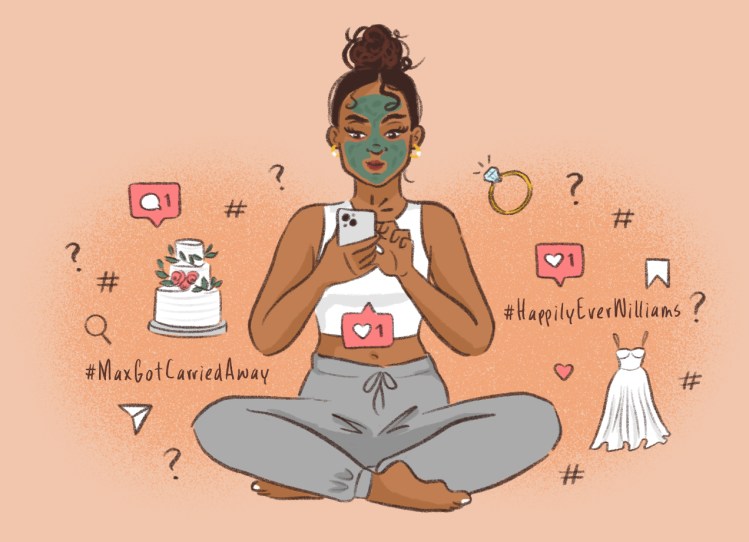 It was the best of times, it was the worst of times, it was the age of the wedding hashtag. Somewhere after Instagram’s 2010 launch, the custom followed that after you said “yes,” you set the date and crafted a hashtag. Maybe your group thread went off pitching clever puns, like #WhenHarryMetCallie. Or maybe you’d even seek out the help of a professional hashtag writer (they exist) or generator (they also exist).

And yet, what was once a millennial rite of passage is now considered quite gauche. We recently ran a survey of 100 readers, and over 85 percent said that the age of the wedding hashtag is resoundingly over. Shaun Gray, popular Houston events planner, sees the same attitude with his clients: “Our couples today barely ever use them.”

But that’s not as much of a mic drop as you might think. Just like a good wedding hashtag, there’s more than meets the eye.

In fact, to understand this backlash, we must understand the point of the wedding hashtag in the first place. On the one hand, wedding hashtags served a utility: they organized digital content so that anyone searching that tag could see affiliated uploads. This meant you didn’t have to give your digits to your BFF’s weird cousin to swap pics. They also, explains Emily Forrest, Director of Communications at online wedding planning company Zola, gave couples something to hold them over until their professional photos came back.

However, as wedding hashtags became more popular, the more necessary it was to make them unique, such that Teresa D. and Joe P.’s destination Bahamian fete didn’t get muddled with Teresa G. and Joe T.’s New Jersey banquet. And as a result, the character length got long. Still, it was worth it if it meant everything stayed in one place. In fact, half of our survey takers said having the photos all together was something they actually liked about wedding hashtags. Great for wedding guests, but even better for non-wedding guests, since hashtags turned wedding stalking into a sport. (As more people went private, though, stalking got harder.)

The other purpose hashtags served was marketing. As Instagram became more ubiquitous, we learned that anyone—or anything—could be branded, whether that’s a startup, influencer, dog with an underbite or, yep, even a wedding. Accordingly, a couple’s wedding hashtag was in itself a mission statement, decreeing who they were as a couple, typically through pun. They could be sincere (#IloveYouBarryMuch), erudite (#MuchAdoAboutHuttons), even irreverent (#MorganHeBargainedFor). “[Wedding hashtags are] often a melding of names or their nicknames,” says Forrest. “It's like a family crest but for couples getting married who likely even met on the internet.” And yet, when Hitchock said that puns are the highest form of literature, he probably wasn’t imagining Aunt Barb trying to type #SusieSwipedWright after a few chardonnays.

The bad wordplay definitely seems to bother people. “When it gets to the puns, it feels like they’re trying too hard,” wrote one respondent to PureWow’s survey. But it goes beyond the intentionally bad jokes. A whopping 75 percent of survey takers answered that wedding hashtags are simply “very 2017.” They’re cringe, cheugy, deeply hetero and foreboding, said one survey taker, “of a synchronized bridal party dance” (shivers).

“And don’t even get me started on the people who still use the hashtag years after getting married,” wrote another. Indeed, two years after her wedding, why is Elle tagging a photo of herself in on a moped with #fRENZbecomELLEovers?

As for couples who used hashtags themselves—we’re looking at you, elder millennials—do they regret them? The consensus seems to be no; they’re emblematic of a point in history when Instagram reigned supreme but before you could tag specific people—a make-do fix that brought everyone together. “Sure it’s a little dated,” said one woman who copped to hashtagging. “But so is my chalkboard art and twinkle lights…and I still love looking at photos of those!”

So if hashtags are out, what exactly is in? Gray says he’s seen a recent trend of couples finding new ways to harness all the photos of their celebration—either hiring their own personal wedding day content creators or revitalizing the once cringe-inducing QR code: Plaster your code on the drink menu, program, you name it, and wedding guests can upload photos to a shared drive where you control the privacy settings. There are also apps like The Guest which make large group photo sharing easier—if your guests are up for downloading the app, of course.

Still, all these newfangled solutions and accusations of cheugy-ness have not, effectively, sent the hashtag the way of the garter belt. People are still using them, and people are still loving them. In fact, Forrest maintains that, “According to [Zola’s] most recent survey of over 4,000 couples getting married in 2023, 33 percent DO plan to have a social media hashtag."

Maybe it’s this succinct response from our survey that sums up where we land with the practice: “They're all terrible (I do like them for stalking purposes, however).” In other words, the wedding hashtag may be passé, but using one to track down that cute guy from Table 9 never will be.