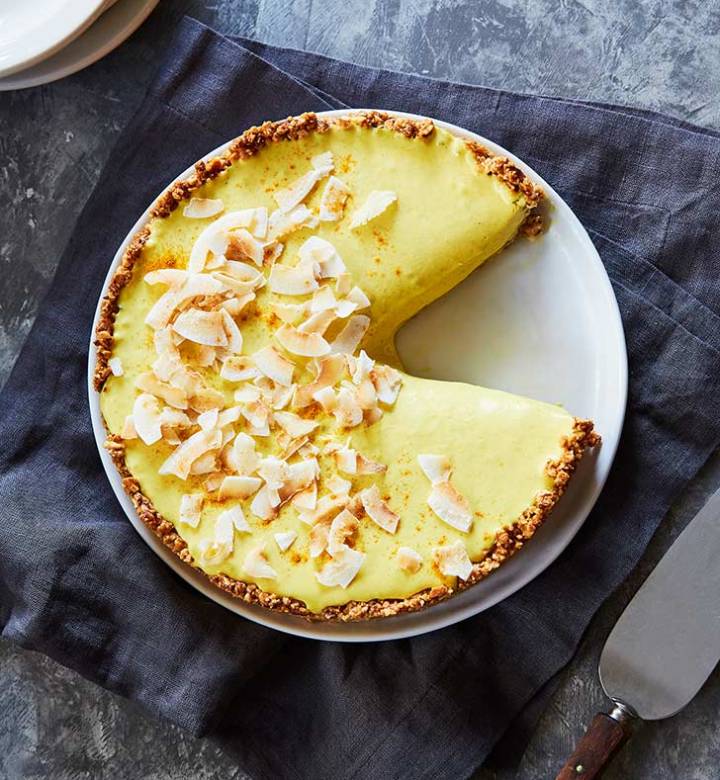 Just because you’re living that vegan life (or vegan-ish life) doesn’t mean you shouldn’t indulge every now and then. That’s why we gussied up golden mylk (a popular vegan beverage known for its anti-inflammatory properties) into a silky, practically no-bake dessert. No exaggeration: This vegan golden mylk cheesecake is dangerous.

1. Make the Almond Crust: Preheat the oven to 375°F. Place a 9-inch springform pan on a baking sheet.

2. In a medium bowl, mix together 3 tablespoons water and the flax meal.

3. In the bowl of a food processor, pulse the almonds until they’re finely chopped. Transfer to the bowl with the flax mixture and mix in the coconut oil, agave and egg white until well combined.

4. Press the mixture into the base and halfway up the sides of the springform pan. Bake until the crust is lightly golden, 12 to 14 minutes. Cool completely.

6. Pour the filling into the crust and transfer to the refrigerator. Chill until the filling is set, 2 to 3 hours. Leave the cheesecake chilled until you’re ready to serve.

7. To serve, dust with turmeric and serve with toasted coconut flakes.