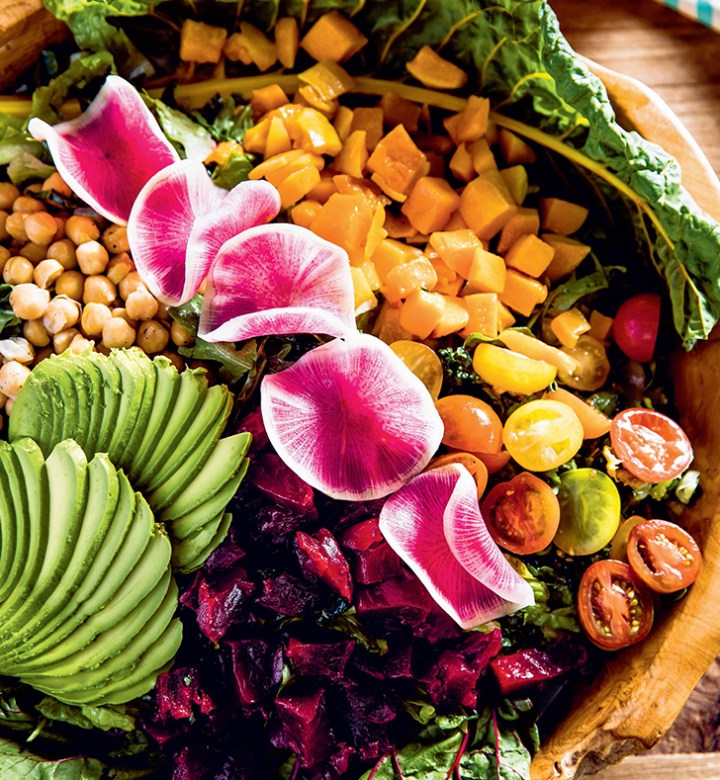 We’ll admit it: We have a huge weakness for those salad places that add a billion toppings and chop everything up into tiny pieces…and then charge an arm and a leg. But luckily, you can achieve chopped salad nirvana at home, thanks to this recipe for vegan chop salad from Helene Henderson’s new cookbook, Malibu Farm Sunrise to Sunset. (It’s based off the recipe from her SoCal-inspired NYC restaurant.)

“The original [restaurant] menu had a classic chop salad,” Henderson writes, “with cheese, meat and garbanzo beans. It was and is a delicious salad, but customers kept trying to modify it with more vegetables, asking for vegetables we did not have available. We experimented with several different vegetables and finally settled on squash, which is sweet, and marinated beets, which are acidic, for our perfect combo.”

Don’t be put off by the long ingredient list here: The dressing, squash and beets can all be made days in advance and kept in the fridge until assembly (and, in our opinion, taste better that way). Or you could swap in whatever leftover vegetables you have on hand—roasted sweet potatoes or carrots instead of squash, pickled jicama instead of beets and black beans instead of chickpeas would all be delicious.

½ cup extra-virgin olive oil, canola oil or a blend of the two

2 or 3 tablespoons chopped fresh herbs (such as parsley, dill or chives)

1. Make the dressing: Spoon the Dijon mustard into a small bowl. Add the red wine vinegar and whisk to combine—it should have the consistency of heavy cream. Season with salt and add the finely chopped shallot, then slowly whisk in the oil to emulsify. The dressing can be made several days in advance and stored in the fridge.

2. Make the roasted squash: Preheat the oven to 400°F. In a bowl, toss the chopped squash with the olive oil. Spread the squash cubes out on a sheet pan, then roast in the oven until they are just soft and a little browned but not mushy, 15 to 20 minutes. Season with salt, and drizzle with the agave and lemon juice. The roasted squash will keep for up to 5 days in the fridge.

3. Make the roasted beets: Preheat the oven to 375°F. Place the beets in a small ovenproof dish, drizzle them with about half of the olive oil and a splash of water, and cover the dish with foil. Roast the beets in the oven until they are just soft, 45 minutes to 1 hour, depending on their size.

4. Cool the beets, then peel the skin off by rubbing a paper towel over them or rubbing them under running water. Chop into a fine dice or slice into thin batons. Place the beets in a small bowl and season with salt and a tiny dash of sugar, then drizzle with the remaining oil. Add the red wine vinegar, lemon juice, shallot, herbs and garlic, and toss. Marinate for 25 to 30 minutes before using. The marinated beets will keep for 1 week in the fridge.

5. Assemble the salad: In a large bowl, toss the romaine, kale and quinoa (if using) with the dressing. Layer the butternut squash, roasted beets, avocado slices, cherry tomatoes, garbanzo beans and radishes (if using) decoratively on top.