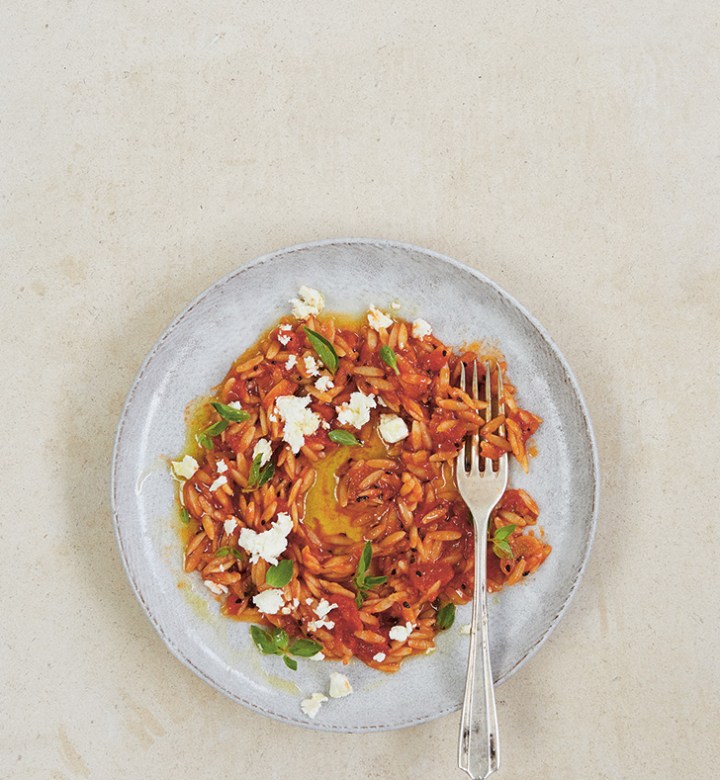 Spaghetti with red sauce, we love you…but we need something new. Enter Anna Jones’s recipe for orzo with spiced tomato sauce and feta, from her cookbook The Modern Cook’s Year. It’s as simple and enticing as any pomodoro, with a spice-laden twist to keep it feeling fresh.

If you’re not yet convinced to ditch the jarred tomato sauce, Jones whips up this dish in just one skillet. It’s as easy as adding a few herbs and spices to plain tomatoes and letting the sauce simmer away—you can even use canned tomatoes if fresh ones aren’t an option.

One word of advice: Cook the orzo until it’s just shy of al dente. It will finish cooking in the same skillet as the sauce, and no one likes mushy pasta (or so we’d imagine).

A crumble of feta, a glug of olive oil and your days of store-bought sauce days will be a distant memory.

From The Modern Cook’s Year by Anna Jones, published by Abrams Books.

1. If you are using fresh tomatoes, roughly chop them and discard the cores. Heat a skillet over medium heat and add the cumin, coriander and nigella seeds. Toast until they release their fragrance, about 1 minute.

2. Add a few tablespoons of oil to the skillet, then add the onion, garlic and chili powder and cook over low heat until the onions are soft and translucent, 8 to 10 minutes. Add the tomatoes and a good pinch of salt and pepper, stir, and cook until they have broken down and formed a soupy tomato sauce, 18 to 20 minutes. If necessary, you can add a little water to loosen the sauce. Add the oregano leaves to the skillet. Season well with salt and pepper (but remember that you will add salty feta at the end).

3. Meanwhile, bring a large saucepan of water to a boil and season generously with salt. Cook the orzo in the boiling salted water until it’s just less than al dente, about 10 minutes (or a couple minutes less than the package instructions). Reserve a cupful of the pasta water, then drain the orzo.

4. Add the orzo to the tomato sauce and let everything cook to a gentle, thick, souplike consistency, about 2 minutes. Add a little of the pasta water to loosen as needed. Serve the pasta with lots of good olive oil (be generous here) and a sprinkle of crumbled feta.