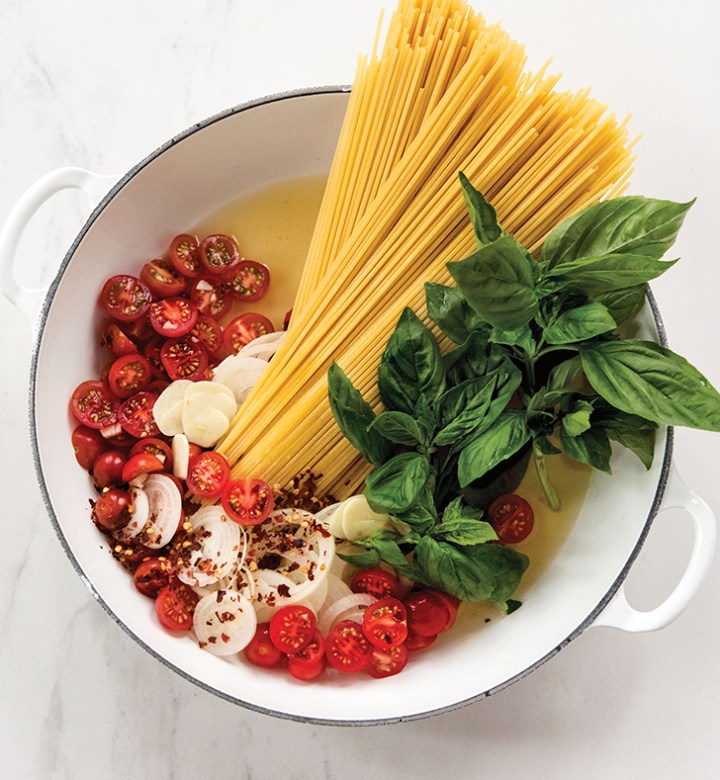 Some nights, we’ve got our chef’s hat on and we feel like spending two hours in the kitchen. Others (well, most nights) we’d rather whip something up in less than 30. Enter this one-pot tomato basil pasta recipe from Sara Lynn Cauchon’s The Domestic Geek’s Meals Made Easy: A Fresh, Fuss-Free Approach to Healthy Cooking.

Cauchon explains why the recipe has been nothing short of revolutionary in her kitchen: “Instead of cooking your pasta and your sauce in separate pots, you cook them together at the same time,” she says. “The result is a richer, more flavorful dish with a much creamier texture than any traditional pasta could ever hope to achieve.”

The best part (beyond having just one pot to clean)? Once you’ve mastered this version, you can customize the recipe to your heart’s content.

1. In a large Dutch oven or soup pot with a tight-fitting lid, combine the vegetable broth, spaghetti, tomatoes, onion, garlic, basil and crushed red-pepper flakes. Bring the mixture to a boil over medium-high heat, then cover and reduce the heat to medium.

2. Cook, stirring frequently, until all the liquid has been absorbed and the pasta is fully cooked, 13 to 15 minutes. Season with salt and pepper.