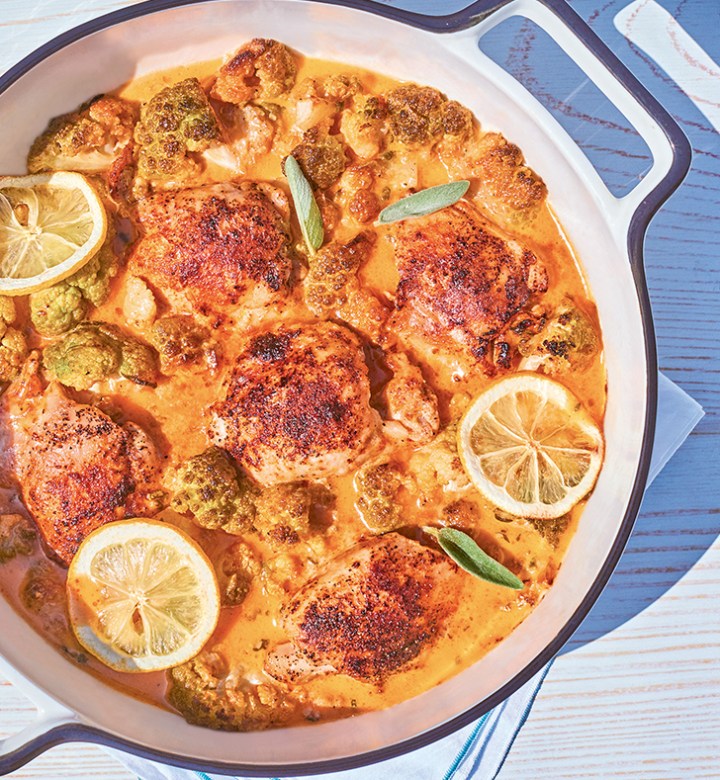 “One-pan dinners mean an even faster cleanup on a busy weeknight,” Freedman writes. “Here the chicken is cooked with a creamy, lemony sauce that is so good you’ll want to spoon it over the cauliflower, too.”

Juice of 1 lemon, plus slices for garnish (optional)

1. Preheat the oven to 350°F. Season the chicken on both sides with the paprika, salt and pepper.

2. In a large ovenproof skillet, melt 2 tablespoons of the butter over medium-high heat. Add the chicken and sear on both sides until golden brown, about 3 minutes per side. Remove the chicken and set aside on a clean plate.

3. Add the remaining tablespoon of butter to the pan and cook the cauliflower and garlic, stirring occasionally, until browned, about 3 minutes.

4. Stir in the chicken broth, heavy cream, Parmesan, lemon juice and sage. Cook until the sauce begins to bubble, about 5 minutes. Nestle the chicken back in the pan, transfer to the oven, and roast for 13 to 15 minutes, or until the chicken is cooked through and no longer pink in the center.

5. To serve, place a chicken thigh and some cauliflower in a shallow bowl and spoon the sauce from the pan over the top; garnish with lemon slices, if desired. Leftovers can be kept in an airtight container in the fridge for up to a week.