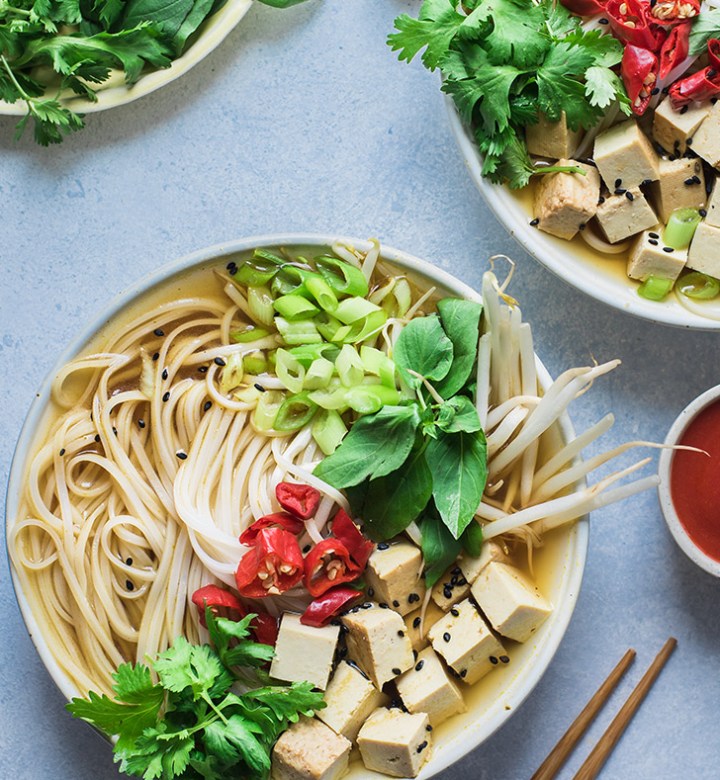 Is there anything more soul-satisfying than diving into a steaming bowl of pho? Normally, you’d have to head to a Vietnamese restaurant to savor the traditional noodle soup. But thanks to Nisha Vora’s recipe for Instant Pot vegan pho—from her new cookbook, The Vegan Instant Pot Cookbook: Wholesome, Indulgent Plant-Based Recipes—we’re making pho at home (at lightning speed, no less).

“Pho broth is traditionally simmered for hours,” Vora writes. “With pressure cooking, you can achieve a richly flavored broth in a fraction of the time.” Her advice? When charring the onions and ginger, don’t skimp on the oil, or you’ll have a mess to scrape up (but be careful of spatters). And when topping your pho, tear up the fresh herbs for the most flavor impact.

Time to break out those chopsticks.

3 cardamom pods, lightly smashed with the back of a knife

One 6- or 8-ounce block baked tofu (plain or five-spice flavor), cut into cubes

3 scallions, sliced on the diagonal

1. Prepare the Noodles: In a large bowl, cover the dried rice noodles with warm water and soak them until the noodles are pliable and opaque, 30 to 45 minutes. Drain the noodles and rinse them in cold water to remove excess starch.

2. Make the Broth: Select the Sauté setting on the Instant Pot and, after a few minutes, add the oil. Once the oil is hot, add the onions and ginger, cut side down. Do not stir them, but allow them to cook until charred and deeply browned, about 4 minutes.

4. Secure the lid and set the pressure release to Sealing. Select the Pressure Cook (manual) setting at High Pressure and set the cook time to 15 minutes.

6. When the pressure on the Instant Pot has been released, open the pot and, using oven mitts, remove the inner pot. With a fine-mesh sieve set over a large bowl, carefully strain the broth and discard the solids. Season the broth with 1 teaspoon salt. Stir the broth and taste it, adding more salt if desired. Select the Cancel setting.

7. Assemble the Pho: Place the cooked rice noodles in individual bowls. Pour the strained broth over the noodles and add the baked tofu cubes. Top the pho with the scallions, basil, cilantro, lime wedges, bean sprouts and chilis or sriracha.