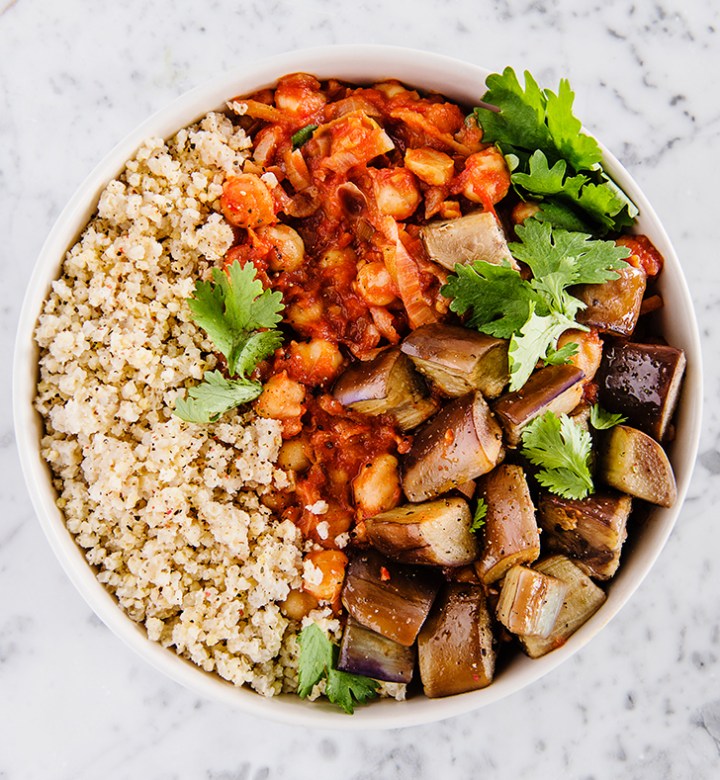 The internet is filled with so many grain bowls that sometimes we wonder where to even begin. That’s until we met Coterie member Jodi Moreno’s harissa chickpea stew with eggplant and millet. It’s a breeze to whip up, it’s packed with protein and it can be modified depending on the season (or your mood).

“I find that this is the perfect dish for when brisk fall weather comes around,” Moreno told us when she dreamed up the recipe in our New York City test kitchen. “The eggplant can be switched out for other vegetables that might be in season, such as squash or zucchini. Also feel free to switch out millet for another kind of grain such as quinoa or farro (and cook accordingly).”

We’ll be creating iterations of this recipe all year long—and you should too.

PureWow’s Chef in Residence program invites food influencers and tastemakers from all over the world to create new recipes in our New York City test kitchen.

One 14-ounce can puréed tomatoes

One 14-ounce can chickpeas, drained

1. Fill a medium saucepan with 2 cups water and add the millet and a pinch of salt. Bring to a boil, cover, reduce to a simmer and cook for 25 minutes. Once the millet is done cooking, remove the lid, fluff with a fork and allow to cool.

2. Meanwhile, heat 1 tablespoon of ghee or oil in a deep skillet over medium heat. Add the eggplant, season with salt and pepper, and cook until tender and golden brown, adding more ghee as necessary to prevent the eggplant from sticking to the skillet, about 10 minutes. Transfer the eggplant to a bowl and set it aside.

3. Add the remaining 1 tablespoon of ghee or oil to the same skillet, add the onion and cook until soft and golden brown, 8 to 10 minutes.

4. Add the garlic and cook for 2 more minutes. Season with salt and pepper, and then add the tomatoes, chickpeas and harissa. Return the eggplant to the skillet and reduce the heat to low; allow to simmer for 10 to 15 minutes.

5. Divide the millet between two bowls and top with the stew. Garnish with a few leaves of cilantro and serve warm.