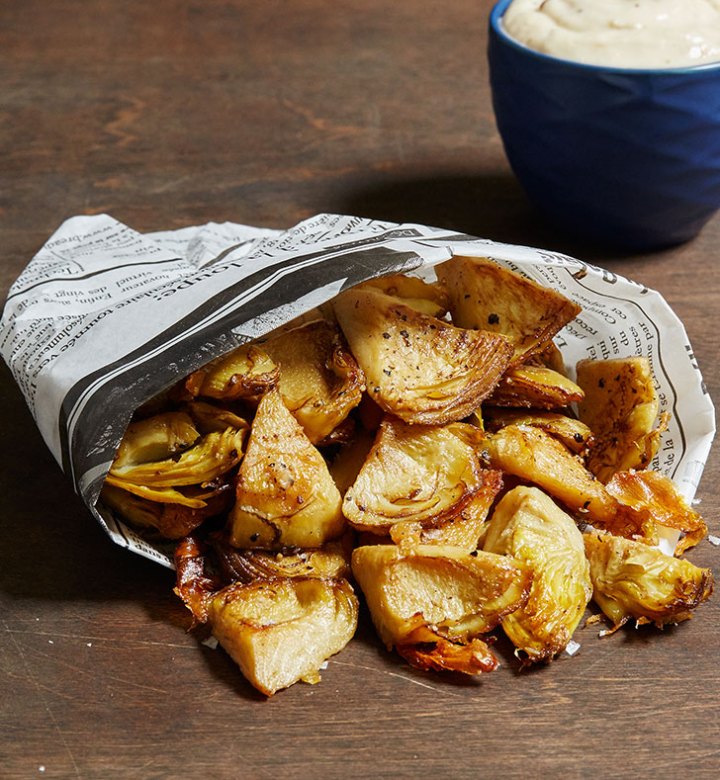 From dips to pasta dishes, there are plenty of ways to cook with artichokes. But in our humble opinion, the most delicious way to enjoy this veggie is roasted in the oven until golden and crispy. Serve with an easy garlic aioli for dipping, and voilà.

1. Season a large pot of water with salt and 1 tablespoon of the lemon juice and then bring to a boil.

2. Peel the tough outer leaves from the artichokes until you get to the tender yellowish leaves in the center. Remove the top third of each artichoke and discard.

3. Use a vegetable peeler to remove any remaining tough leaves and the outside of the stem. Scoop out the fuzzy part in the center of each artichoke (this is the “choke”) and discard.

4. Boil the prepared artichoke hearts for 8 to 10 minutes. Drain and then pat dry with paper towels.

5. Preheat the oven to 400°F. In a large bowl, toss the dried artichoke hearts and garlic cloves with the olive oil.Arrange the pieces in an even layer on a baking sheet; season with salt and pepper.

6. Roast, tossing occasionally, until the artichoke hearts are golden brown and crisp, 25 to 30 minutes.

7. Squeeze the garlic cloves out of their skins and into a small bowl. Mash the cloves with a fork until smooth. Stir in the mayonnaise and the remaining 1 tablespoon lemon juice. Season with salt and pepper.

8. Serve the crispy artichoke hearts immediately with the garlic aioli on the side.

Note: You can also use 1 pound of drained canned artichoke hearts. Pat them dry with a paper towel or allow them to air-dry until no longer wet to the touch.