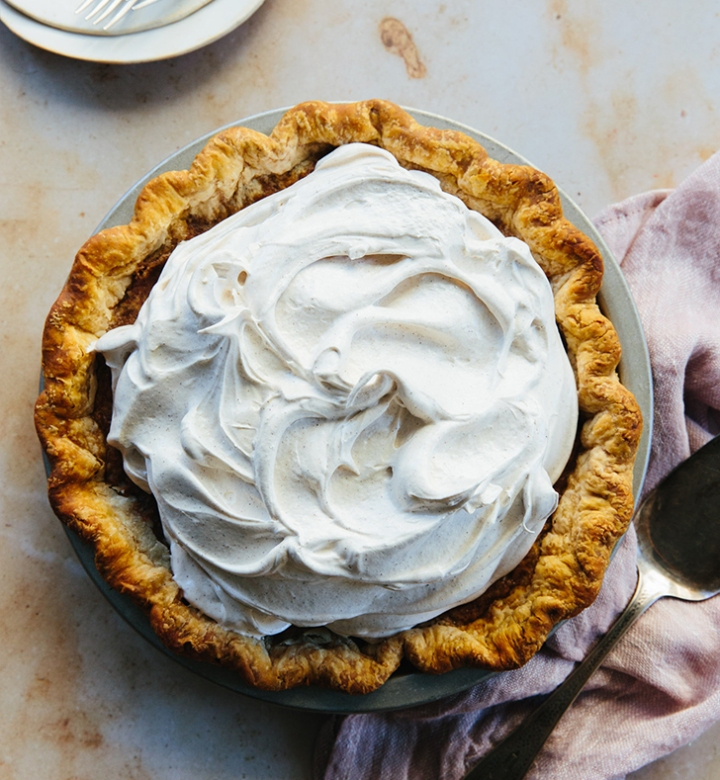 Fruit options are sparse in that awkward period between winter and spring, but that’s not stopping us from making a seasonal dessert. The Book on Pie author Erin McDowell’s cinnamon meringue pie is just the thing to fill the void.

“I like meringue as a topping for any kind of pie,” McDowell tells us, “and I’ve wondered why there isn’t more on a spiced pie. People also ask me a lot about what kinds of pies to make this time of year when there’s not a lot of fruit in season.”

The filling is a type of custard known as sugar pie, and McDowell says that since it’s thickened with flour instead of eggs, it’s almost impossible for the surface to crack when you bake it. But you’ll be covering it with swoops and swirls of meringue anyway.

1. Par-Bake the Crust: On a lightly floured surface, roll out the pie dough into a ¼-inch-thick round. Roll up the dough onto the rolling pin, then gently transfer it to the pie plate. Trim any excess dough so you have about 1 inch of overhang.

2. Tuck the excess dough under itself all around the edge of the pie plate, then crimp as desired. Prick the base all over with a fork and then refrigerate the dough for at least 30 minutes. Position a rack in the lower third of the oven (preferably with a baking steel or stone on it) and preheat the oven to 425°F.

3. Line the crust with a piece of parchment paper slightly larger than the size of the pie plate, and fill the pie with pie weights up to the top edge. Bake the pie crust until it barely starts to brown along the edge, 12 to 15 minutes. Remove the parchment and pie weights, and bake until the base is dry, about 5 minutes more. Cool completely. Reduce the oven temperature to 375°F.

4. Make the Filling: In a medium bowl, whisk the sugar, flour, cinnamon and nutmeg to combine. Add the brown sugar and whisk to combine.

5. Add the milk, cream, vanilla extract and salt, and whisk just enough to combine—too much whisking will lead to lots of air bubbles that can linger on the surface of the pie when you bake it.

6. Pour the custard into the cooled pie crust. Bake until the pie appears set at the edges but is still jiggly in the center, 28 to 32 minutes. Cool to room temperature.

7. Make the Cinnamon Meringue: Shortly before you’re ready to serve the pie, make the cinnamon meringue. Fill a medium pot with about 2 inches of water and bring it to a simmer over medium-low heat. Place a medium bowl on top of the pot, add the egg whites, cream of tartar, sugar, salt, vanilla and cinnamon, and whisk to combine.

8. Continue to heat, whisking constantly, until the mixture reaches 160°F on a thermometer. Transfer the heated mixture to the bowl of an electric mixer fitted with the whisk attachment, and whip the mixture on medium-high speed until it reaches medium peaks, about 3 minutes for a regular height, and up to 5 minutes for a “mile high” topping.

9. Top the cooled pie with the meringue and spread it to the edges, keeping it piled higher in the middle. If desired, toast the meringue with a kitchen torch.