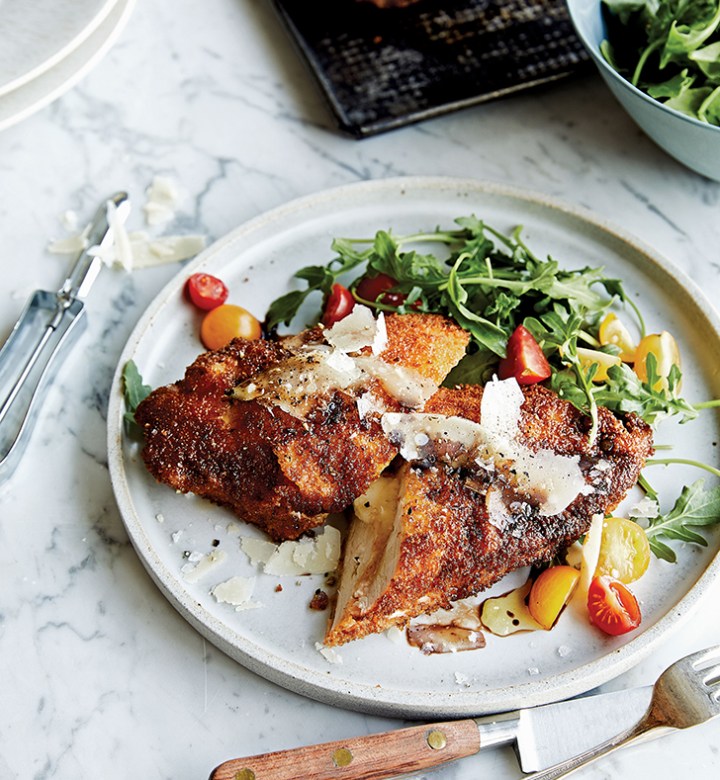 Chrissy Teigen’s second cookbook, Cravings: Hungry for More, has us practically licking every single page. But we’re here to talk about only one of her recipes right now: cheesy chicken Milanese.

Juicy, crispy chicken cutlets taste indulgent, but Teigen explains that they basically count as a salad: “Whoever invented Milanese has some serious Jedi-mind-trick stuff going on. I mean, it’s a salad. But on top of a fried chicken cutlet. It’s like spa food. But it’s fried chicken,” she says.

Her version is unique because she uses two types of bread crumbs for extra-crispy results. Plus, there’s cheese—lots of it. “I stuff the insides of those cutlets with mozzarella so when you cut into them, they bleed cheese,” Teigen says.

Hmm, we’re not sure what kind of spa would serve this, but it sounds like our kind of spa.

1 cup all-purpose flour, plus more for “gluing” the chicken

A chunk of Parmigiano-Reggiano cheese

Extra-virgin olive oil (the best you have)

2. Place a chicken breast between two big sheets of plastic wrap. Using the smooth side of a meat pounder or an empty wine bottle, pound the chicken as thin as you can without ripping it to shreds. Season with salt, black pepper and cayenne, and repeat with the remaining chicken breasts.

3. Set up three shallow bowls. Spread out the flour in one and season it liberally with salt, black pepper and cayenne. Place the eggs in the second bowl, season them with salt and beat them lightly just to combine. Combine the bread crumbs and panko in the third bowl and season with salt and black pepper.

4. Place ¼ cup of the mozzarella on one side of each pounded chicken breast, about 2 inches in from the edges. Moisten the edges of the whole breast with water, then sprinkle a little flour all over the edges. Fold the breast over the cheese, pressing on the edges to seal.

5. Take the folded breast and dip it into the seasoned flour on both sides, shaking off the excess. Move it to the egg and dip in both sides, letting the excess drip off. Transfer to the bread crumbs and press each side into the crumbs. Put the breast on a plate. Repeat the breading procedure with the remaining breasts in the same order: flour, eggs, bread crumbs.

6. In a large skillet, heat about ½ inch of canola oil over medium-high heat. When the oil is hot, carefully lay two of the breaded cutlets in the skillet and cook until browned and crisp, about 3 minutes. Flip the cutlets and cook until golden brown, another 3 minutes. Transfer the cutlets to a baking sheet and finish cooking in the oven, about 15 minutes, while you fry the remaining two cutlets, adding a little oil to the skillet if necessary between batches.

7. To serve, arrange a cutlet on each of four plates and top each one with a handful of arugula and ¼ cup of the tomatoes. Use a vegetable peeler to shave some Parmesan over each cutlet, sprinkle with salt and pepper and drizzle with olive oil and balsamic.