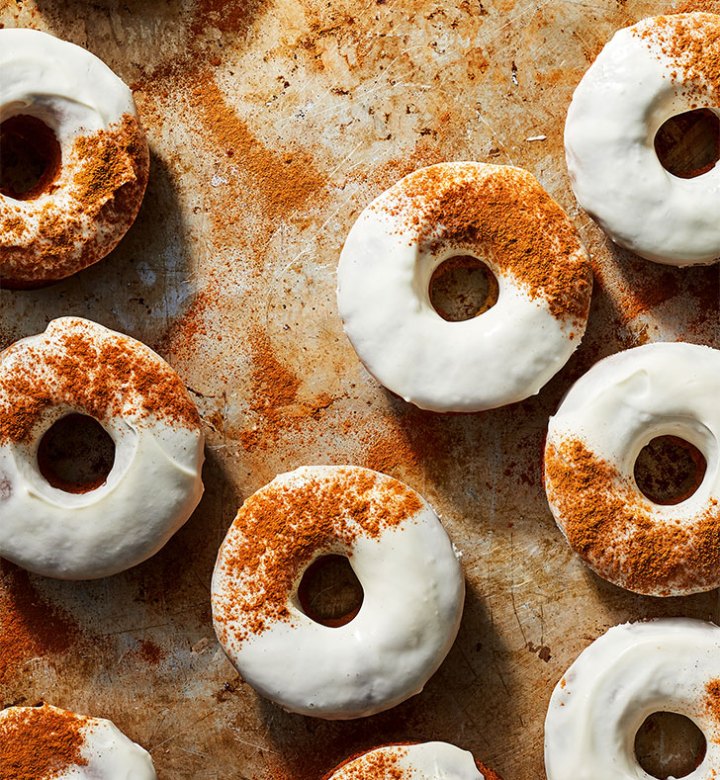 You can’t always get what you want, but sometimes life hands you recipe developer Erin McDowell’s carrot cake doughnuts and it’s exactly what you need.

“Think traditional carrot cake flavor, morphed into a cake doughnut,” McDowell tells us. “It has all the good stuff: shredded carrots, toasted pecans and, of course, a cream cheese glaze.”

Baking doughnuts is, in our opinion, way easier than deep-frying. The only tradeoff? You’ll need a doughnut pan. We like this nonstick one from Wilton.

“The cream cheese will make the glaze thicken as it sits,” McDowell says, “so you might have to thin it out to get it to the ideal drizzling consistency. Or you can spread it on for a more frosting-like texture. These doughnuts are great on their own, but I like to finish them with ground cinnamon, which looks really cute.”

You might say they’re almost too cute to eat. Almost.

3 tablespoons heavy cream or whole milk, plus more as needed

1. Make the Doughnuts: Preheat the oven to 425°F and lightly grease the cavities of two standard doughnut pans with nonstick spray.

2. In the bowl of an electric mixer fitted with the paddle attachment, cream the butter, oil, brown sugar and granulated sugar until light and fluffy, about 5 minutes.

3. Add the eggs to the mixer one at a time, mixing on medium speed to combine between each addition. Add the vanilla and mix to combine. Scrape the side of the bowl.

4. In a medium bowl, whisk together the flour, baking powder, salt and cinnamon. Add half the flour mixture to the mixer and mix on low speed until incorporated. Add half the buttermilk and mix to combine. Repeat, adding the remaining flour until incorporated, then the remaining buttermilk until the batter is smooth and well combined. Add the carrots and pecans; stir to combine.

6. Bake the doughnuts until a toothpick inserted into the center comes out clean, 12 to 15 minutes. Cool inside the pan for 5 minutes, then turn out onto a rack. Cool completely or until just slightly warm, at least 10 minutes.

7. Make the Glaze: In a medium bowl, whisk the cream cheese until it’s light and fluffy. Add the confectioners’ sugar, cream and vanilla, and mix to combine. The glaze should be thick but drizzle-able. If it’s too thick, add more cream or milk 1 teaspoon at a time until it reaches the desired consistency. Spoon the glaze over the cooled doughnuts. Let the glaze set at least 20 minutes before serving.