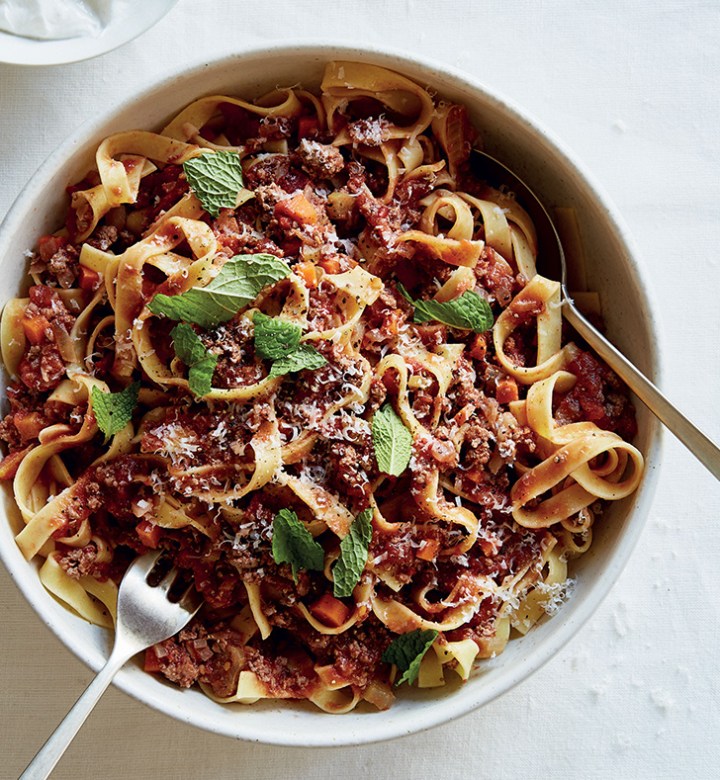 Paul Brissman/Antoni In the Kitchen

We like to think we have a lot in common with Queer Eye star, restaurateur and Antoni in the Kitchen author Antoni Porowski. You know…we both love avocados and Jonathan Van Ness—and, of course, pasta. In his new cookbook, he’s putting a Middle Eastern spin on the traditional Italian meat sauce with this Moroccan-style pasta Bolognese.

“Cumin, coriander and cinnamon—as well as lamb rather than the traditional beef—give this classic meat sauce a little spin,” Antoni writes. “Since the sauce makes enough for two pounds of pasta, I make it on a lazy Sunday and freeze half of it (or all of it, in two batches) for a no-fuss weeknight meal or weekend dinner later on.”

This sauce is unsurprisingly irresistible, so if you end up with leftovers, we salute you. It borrows just enough from its Italian origins to taste familiar, but the fragrant, spicy twist keeps us coming back for bite after bite.

And don’t let the cooking time scare you away—most of it is completely hands-off. Porowski’s genius advice? “For quick work,” he says, “you can chop the onion, carrot, celery and garlic together in a food processor.”

Or we could invite you over to cook it for us, Antoni. Thoughts?

Excerpted from Antoni in the Kitchen © 2019 by Antoni Porowski with Mindy Fox. Photography © 2019 by Paul Brissman. Reproduced by permission of Rux Martin Books/Houghton Mifflin Harcourt. All rights reserved.

One 28-ounce can whole tomatoes, preferably San Marzano, with their juices

1 pound long pasta, such as tagliatelle, fettuccine, linguine or spaghetti

1. Make the Sauce: In a large Dutch oven or other wide heavy saucepan, heat the oil and butter over medium heat. Add the onion, carrots, celery and garlic, and cook, stirring occasionally, until the onion is softened and translucent, 6 to 8 minutes. Add the lamb and cook, stirring frequently and breaking up the meat into bits with a wooden spoon, until cooked through, about 6 minutes.

2. Stir in the cumin, coriander, crushed red-pepper flakes, cinnamon, ¾ teaspoon salt and a generous pinch of pepper and cook for 30 seconds. Stir in the milk. Bring to a simmer, then reduce the heat to medium-low and gently simmer until the sauce is thickened, about 5 minutes. Add the wine and simmer until mostly evaporated, 8 to 10 minutes more.

3. Add the tomatoes and their juices, then reduce the heat to low. Break up the tomatoes into smaller pieces with a wooden spoon, then gently simmer, uncovered, stirring occasionally and adding water ½ cup at a time if the sauce becomes dry, until the sauce is deeply flavorful, about 3 hours. Remove from the heat and adjust the seasoning to taste. Reserve half for the pasta. (The remaining sauce can be refrigerated for up to three days or frozen for up to three months.)

4. Make the Pasta: Bring a large pot of water to a boil and add salt until it tastes like the ocean (taste it). Add the pasta and cook, stirring, until al dente.

5. Meanwhile, in a small bowl, stir together the yogurt and 1 to 2 tablespoons of the pasta cooking liquid to loosen it just a bit. Set aside.

7. Transfer to serving bowls. Dollop with the yogurt and top with the cilantro or mint, cheese and black pepper.

Note: This recipe makes extra sauce, but you can freeze the leftovers for another time. Gently reheat the frozen sauce in a saucepan over low heat, stirring occasionally, and adding 2 to 4 tablespoons water as necessary before using.