Salt and Vinegar Roasted Potatoes with Feta and Dill 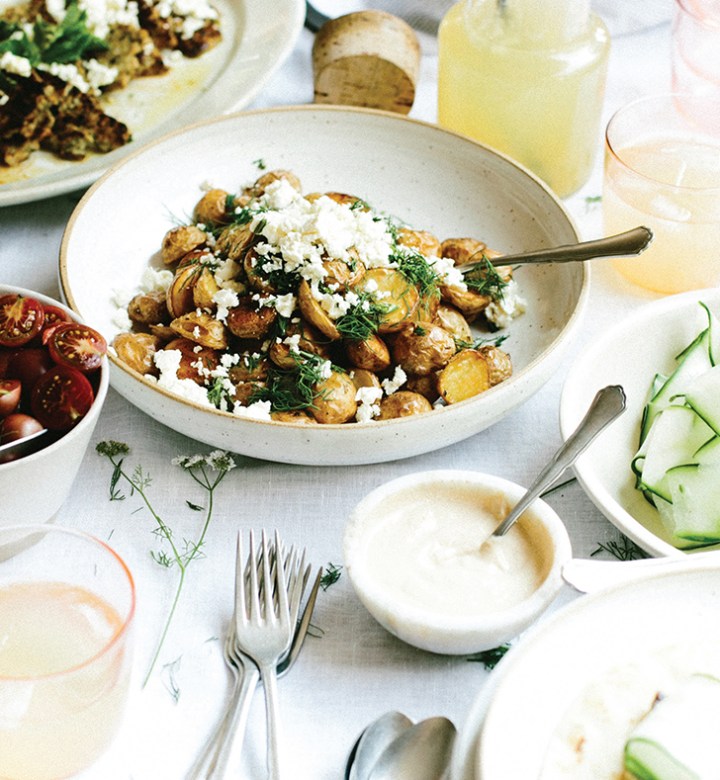 Mashed potatoes? Snooze. Smashed potatoes? Been there, done that. We’re trading them in for these salt and vinegar roasted potatoes with feta and dill from Ashley Rodriguez’s cookbook Let’s Stay In. They’re crispy like French fries on the outside but creamy on the inside.

Rodriguez’s recipe was inspired by a dish from Seattle-based restaurant The Fat Hen: “Small new potatoes, halved, have a copper-colored exterior that practically shatters when you bite, while the interior is fluffy and buttery, just as a potato should be,” she says in her cookbook. “The Fat Hen’s secret to perfect potatoes? A boil, then a hot roast. I’ve been making my potatoes that way ever since.”

On the off chance that there are leftovers, they make a quick breakfast when crisped up in a hot skillet with a fried egg on the side.

1. In a large pot, combine 2 cups of water and the potatoes, vinegar and 2 teaspoons of the sea salt. Boil with the lid on until the potatoes just start to get tender but are still a bit firm in the center, about 10 minutes (depending on the size of your potatoes).

2. In the meantime, preheat the oven to 425°F and line a large sheet pan with parchment paper.

3. Drain the potatoes. Carefully toss them with the olive oil, remaining ¼ teaspoon sea salt and oregano. Arrange them in a single layer on the prepared sheet pan and then roast until deeply golden and crisp, 20 to 30 minutes.

4. Toss the hot potatoes with the garlic. Transfer the potatoes to a serving bowl and then top with the feta and dill. Add a bit of flaky salt to the top, if desired.