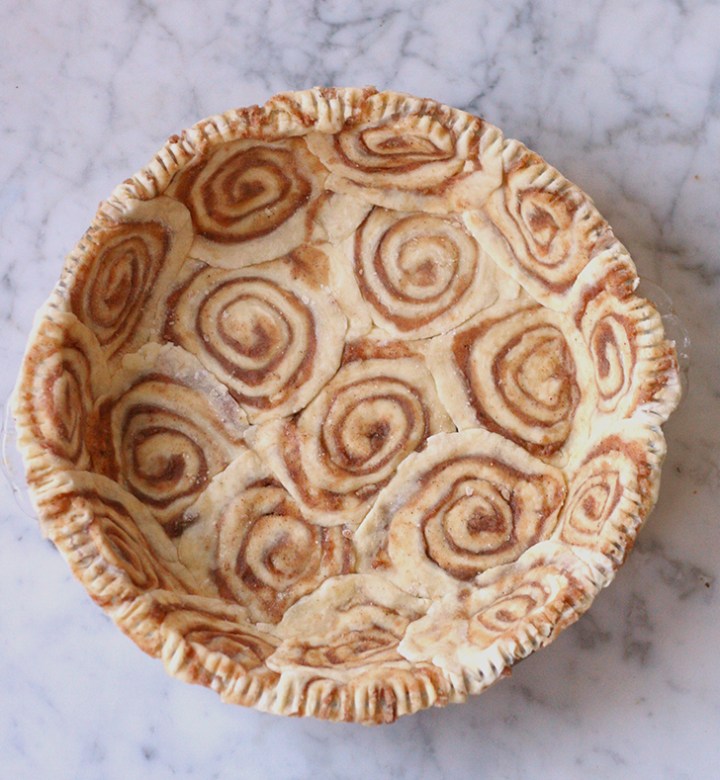 We’re fans of store-bought pie crust. It’s convenient, it tastes good and, most important, it can be turned into the greatest creation of all time: cinnamon-roll pie crust. It’s the perfect base for your favorite apple or pumpkin pie recipe. Plus, that gorgeous spiral pattern will have friends and family thinking you spent all day making it, when it really took just 20 minutes.

1. On a lightly floured surface, roll out the pie crust a few times to even it out to about ½-inch thickness.

2. In a small bowl, mix the butter with the sugar, cinnamon and vanilla extract to combine. Spoon the mixture into the center of the crust. Use a spatula to spread it evenly over the entire crust.

3. Starting with the side closest to you, roll the crust into a tight spiral. Cut the finished spiral into ½-inch-thick pieces.

4. On a lightly floured surface, use a rolling pin to roll each piece into a ¼-inch-thick round. Place the pieces in a pie plate, overlapping them slightly and pressing to seal. (If the pieces aren’t sticking together well, use a little water to help “glue” them.)

5. Continue placing rounds of dough in the pie plate until the entire plate is full; trim any excess hanging over the edge. Use the tines of a fork to press indentations all around the edge. Chill the crust well before filling and baking, and bake according to your preferred pie recipe.